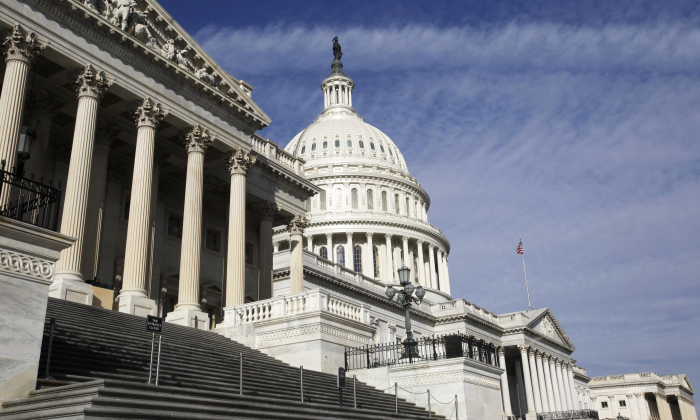 The U.S. Capitol in Washington is pictured in this file photo. (Jim Bourg/File Photo via Reuters)
Viewpoints

The Separation of Powers as Prudence, Not Ideology

Speaker of the House Nancy Pelosi (D-Calif.) recently said, “We do not have a monarchy; we have a separation of powers in our country.”

The framers of our Constitution welcomed the discovery of the separation of powers as one of the great improvements to the science of politics. They didn’t, however, think of it in ideological terms, as some strict formula to be applied thoughtlessly. They considered it one of several “inventions of prudence,” which, if used well, could help prevent tyranny and also aid deliberation and execution of the people’s will.

As citizens think about Trump’s declaration of a national emergency, they need to consider how the separation of powers is meant to function prudentially in the Constitution.

James Madison—the man known as the “father of the Constitution”—called the separation of powers an “essential precaution in favour of liberty.” In fact, he pronounced “the accumulation of all powers, legislative, executive, and judiciary, in the same hands” to be “the very definition of tyranny.”

But he also argued that having an effective separation of powers actually requires mixing them to a degree. He wrote that “unless these departments be so far connected and blended, as to give to each a constitutional control over the others, the degree of separation which the maxim requires, as essential to a free government, can never in practice be duly maintained.”

There is a danger even among the sincere friends of liberty that reverence for the phrase “separation of powers” can eclipse appreciation for the very purpose the maxim exists to serve. For example, the ancient Greek political thinker Hippodamus was enamored with the number three and tried to apply it throughout a constitution unquestioningly. Aristotle rightly mocked him as an eccentric. Likewise, to think that a strict separation of government branches is necessary everywhere, all the time, is an exercise in ideology, not prudence.

Separation of the branches of government is not as important as their independence. As Madison explained, the goal of the separation of powers is to assure that each department “have a will of its own” and that “the members of each department … be as little dependent as possible on those of the others.” To meet these conditions, mixing the branches to a degree is necessary.

For example, the Constitution grants the Senate a consenting role in the executive’s choice of judicial appointees and the executive a veto power in the legislature’s lawmaking process. This partial mixing of the branches helps make each one substantially independent of the other branches and effectively representative of the people’s will.

These apparent violations of the separation of powers give rise to two benefits. First, they prevent any one branch from tyrannizing the others. Second, they intermingle the branches in such a way that the whole government—as collectively representative of the people’s will—takes part in deliberation.

Government of, by, and for the People

In light of Madison’s explanation of the purpose for the separation of powers, there are two questions to ask about the president’s declaration of a national emergency. First, does his use of this power undermine the independence of the other branches and their constitutional means for controlling the executive branch? Second, is the president’s use of a national emergency declaration necessary for making the executive branch substantially independent and effectively representative of the people’s will?

The answer to the first question is decidedly no.

As I have substantially argued elsewhere, the emergency declaration doesn’t prevent the other branches from using their constitutional powers to control the executive branch. The president indicated that he would defer to the judgment of the Supreme Court if it ruled on the declaration. And the president’s emergency powers don’t prevent Congress from impeaching him if it concludes that his actions imperil the republic. Furthermore—as the 2018 midterm elections demonstrated—the members of the constitutional body that is able to impeach the president aren’t dependent on him for their membership in that body.

The answer to the second question is arguably yes.

Rule by emergency declarations, even “regulated” ones, is generally not good republican policy (I don’t mean the Republican Party). But the word republican means rule by the people or according to the public interest, and “the people” and “public interest” are meaningless concepts if anyone can enter the country and declare themselves an American.

Of course, most tyrants claim to rule for the people. Stalin executed millions of Russians purportedly for the sake of the abstract principle those individuals collectively represent. Border security, however—because it is required for political sovereignty—is exceptional and worth using constitutional powers to their full limits to enforce.

Populations of illegal immigrants already distort appropriation calculations that determine how many representatives that states receive. Estimates show that in 2020, California will gain two representatives because of its illegal population, while Virginia and Indiana will each lose one. These numbers directly affect the political composition of Congress, and thus Congress is growing ever less representative of the people.

The ironic conclusion, then, is that through this declaration the executive branch is actually helping to protect the independence of the legislative branch as a true representative of the people. The president is protecting the separation of powers by protecting the republican basis of all branches.

Senate Majority Leader Mitch McConnell (R-Ky.) noted that this emergency declaration “is the predictable and understandable consequence of Democrats’ decision to put partisan obstruction ahead of the national interest.” It’s hard to imagine a better example of such hardened partisanship than refusal to protect our common border.

Trump’s emergency declaration doesn’t violate the true purpose of the separation of powers. He’s using constitutional executive authority to maintain his independence and preserve the sovereignty of the people, while leaving to the other branches the same opportunity.