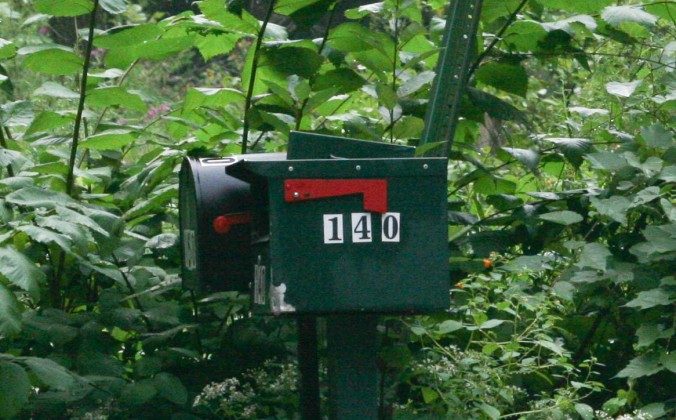 The mailbox outside the Falun Gong community of Dragon Springs. (Holly Kellum)
The Reader's Turn

The Secret’s Out: It’s About Safety & Serenity

“Why is it so secretive there?” “What are they hiding there, anyway?”

It’s not every day that you get asked this about your workplace. But these are questions I hear fairly often. I work, you see, at Dragon Springs (or “DS”).

The answer to these questions might surprise you. Or even inspire you. For the answer involves acts of courage and charity–the very kinds of noble deeds we know took place at the founding of this country.

America meant the same thing for the Hugenots as it does for my Asian students today, some 300 years later.

When people refer to DS as “secretive,” usually they mean that the DS community is gated, and not just anyone can enter. And other parts, you might find fenced off.

Why, though? Why not leave the gates wide open if it’s just religious and spiritual people up there meditating away happily?

The top reason, as I see it, is safety, and particularly the safety of children.

The inspiration behind DS was to create a safe and supportive community for victims of human rights violations—often terrible ones—in China. There, the communist regime has persecuted Falun Gong adherents.

Many who’ve come to DS have a tale to tell, often of tears and terror in China.

One of my students, now a poised young tenth grader, watched as a child in China as communist police dragged her father out of her home. Simply for his beliefs.

The spacious, tree-lined grounds at DS provide a healing, safe space in which to mend a wounded heart

Months later she learned that he had been tortured to death in prison—where he never should have been in the first place.

I learned her family’s story in a moving memoir she wrote last year. I had tears in my eyes thinking of the pain she and her mother must have felt.

But it also gave me hope, thinking about the new life she was starting in America, and all the opportunities—and safety—DS provided her. She didn’t have to worry about loved ones being tortured to death here.

Another student of mine, a boy, had been forced to live on the streets in China after his parents were both unlawfully arrested, similarly for their beliefs; one was beaten to death in police custody.

For him, the spacious, tree-lined grounds at DS provide a healing, safe space in which to mend a wounded heart. DS offers him a chance to have a normal childhood, without constant, gnawing fears.

Some of our Deerpark ancestors, like the Huguenots, would be proud of the work DS is doing. The Huguenots came here, after all, to escape religious persecution and start a new life.

For them, America meant the same thing as it does for my Asian students today, some 300 years later.

You have to keep the people, or campers, you’re entrusted with safe.

I think the Huguenots would understand the gate at DS; safety and freedom sometimes go hand in hand.

But by any standard, it’s normal to put security first when children are involved. Especially school children.

A significant part of the DS community is its student population, and the safety of students here is of course a special concern.

Just like at any school in the area, the school at DS, Fei Tian Academy of the Arts, is responsible for the safety and welfare of its students.

And just like any other local school, not just anyone can walk in, or even loiter on the grounds; strict rules govern school access everywhere.

It’s not just schools, of course. You’ll find a gate similarly barring your or my entrance at the New York YMCA Camp over on Big Pond Road, in Huguenot.

As a teacher, it makes perfect sense to me—you have to keep the people, or campers, you’re entrusted with safe.

I don’t know what activities exactly are going on at the Y camp, since I’m not a part of that community. And that’s fine, that’s their right; privacy is a basic right, after all.

But that doesn’t make me suspicious of them or wonder what’s going on behind the gate. I’m glad to see they’re keeping the camp-goers safe.

Aside from safety, most everyone who lives, works, or visits DS practices Buddha School meditation. Namely, Falun Gong.

While the term “Buddha School” might conjure images of exotic monks, most are just like you and me in many ways.

And one big thing we have in common is a love of peace and quiet.

Many residents of Deerpark are drawn by the natural beauty and tranquility of the area, and that’s something everyone at DS appreciates as well, and wants to preserve.

I’ve also noted while working at DS that people are conscientious about preserving the peace and quiet around them, too; no go-cart engines or drag race sounds are ever heard pouring from the site. At most, you might hear a gentle Temple bell tolling in the distance once in a while.

This year alone our musician students have put on three performances in the local community, open to all.

DS hasn’t yet been able to open its gates widely to visitors, but I’m told that doesn’t rule out the possibility in the future. (Construction is still ongoing, making safety a concern for visitors as well as DS residents!)

I know many of those who work and volunteer at DS would love to share the beauty of the place with neighbors one day. I hope relations with the surrounding community can continue to grow, so that this might be possible sooner.

In the meantime, DS has been happy to share a taste of its artistic beauty with the local community, by bringing it to them.

This year alone our musician students have put on three performances in the local community, open to all. The most recent was at the Mt. Hope Senior Center.

Our students still talk about the smiles and applause from our neighbors, and how much it meant to them to share their beautiful classical music with the community.

So that’s it, I’m afraid—the secret’s out, and it really is that simple, as far as I can tell. That is, DS has to keep the safety of its residents in mind, like any school or camp site might, and the environment is meant to be one of peace and quiet.

If you’re interested in learning more about our students and their studies, I’d invite you to visit the school’s website (feitianacademy.org) or, better yet, catch our next student performance in town!

Matthew Kutolowski is an English teacher at Fei Tian Academy of the Arts, at Dragon Springs.