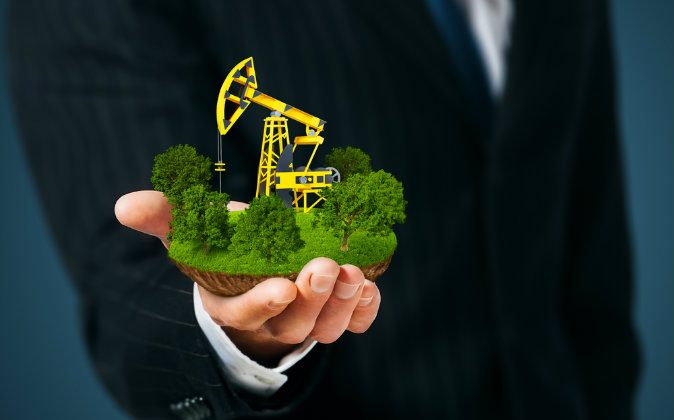 The Secret World of Oil

Oil powers our cars and our economy. But it’s also a fuel source for bribery and corruption across the globe. Ken Silverstein, an award-winning investigative journalist and former Washington editor of Harper’s Magazine, shines a light on the industry’s darkest secrets in his new book, “The Secret World of Oil”. In this Squaring Off, we ask Silverstein five questions about what he discovered during his investigation, and what we can do to fight back against corrupt oil tycoons.

Q1: You argue that the oil industry is actually the most corrupt industry in the world. How?

Since the Foreign Corrupt Practices Act was passed in 1977, there have been more bribery cases involving the energy industry than any other sector. The energy business has also been hit with greater collective fines under the FCPA than any other industry.

If you’re selling widgets, you make a small amount of money on a lot of contracts. When you’re in the oil business, you’re chasing a small number of huge deals that can be worth tens of billions of dollars. “Corruption isn’t endemic in the energy business because people in the industry are more corrupt or have lower morals but because you’re dealing with huge sums of capital,” Keith Myers, a London-based consultant and former BP executive, told me. “A million dollars here or there doesn’t make any difference to the overall economics of a project, but it can make a huge difference to the economics of a few individuals who can delay or stop or approve the project.”

Q2: As consumers, how much responsibility do we have in the oil industry’s success? Which questions should we be asking, and of whom?

On the one hand, consumers have a lot of responsibility because we’re driving demand for oil – for example, we want gasoline to fuel our SUVs. And as a former Chevron executive told me, “As long as we want cheap gas, democracy can’t exist,” meaning that we import oil from many corrupt, authoritarian regimes and so we’re propping up those regimes with our money. But elected officials set policies and so the questions need to be addressed to government. As to what the questions should be, there are far too many, but here are a few: Why does the government continue to so lavishly subsidize the oil and gas industries? Should the government more aggressively discourage oil consumption with higher taxes and stricter fuel standards? Why is the energy industry exempt from every major piece of environmental legislation passed during the last forty years? Do we really need to support or abet every oil-rich dictatorship out there or are there some regimes (hint: Equatorial Guinea, Turkmenistan) that are beyond the pale and where political and trade ties should be reduced to a minimum?

Q3: Wouldn’t there still be an unwavering demand for fossil fuels regardless of increased industry transparency? So, in theory, does this corruption really matter all that much in regard to the future of global warming?

No, it doesn’t because as you say, reducing corruption is not going to reduce demand so there’s no direct link to global warming.

Q4: Who would benefit from increased transparency in the oil industry? Would there be any obvious benefits for consumers?

There’s probably not a huge benefit to consumers from a strictly economic standpoint. The price of gasoline is not going to plummet if bribery (legal or otherwise) is eliminated because it’s a small component of overall costs. The primary beneficiaries would be people in oil producing countries because at the moment citizens of many of those states have no idea how their governments spend their energy revenues. Four years ago Congress passed the Dodd-Frank Act, which includes a provision (Section 1504) that requires oil, gas and mining companies to disclose their payments to governments. It still hasn’t been implemented because of opposition from industry, which essentially argues that it would hurt American companies’ “competitiveness” abroad because Russian and Chinese firms won’t have to provide the same information. Transparency is not a cure-all — some governments are pretty clear about how much oil revenue they are taking in, they’re just not clear on how the money is being spent ­– but it makes it a bit harder for governments to steal money.  It’s hard to argue with that.

Q5: Are there specific organizations or individuals working to expose the industry’s corruption? If so, what can we do to support them in their fight?

There are lots of great organizations out there. I’d highlight Global Witness (which is based in London and has offices in DC): It does original, first-rate investigations about corruption in the natural resources industry – work as good as anything being done at top media investigative units. Human Rights Watch also does amazing investigations about corruption in the energy industry. There’s a Swiss outfit called the Berne Declaration that does a great job tracking the commodities business. With the traditional media business retracting, the work of groups like these are more and more important.

Jessica Ovington graduated in 2013 from the University of Georgia with a B.A. in International Affairs and will be attending King’s College London for their Intelligence & International Security master’s program in the fall of 2014. She was an editorial intern at New America.