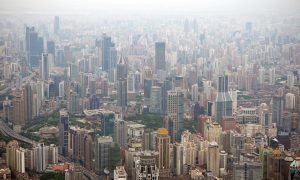 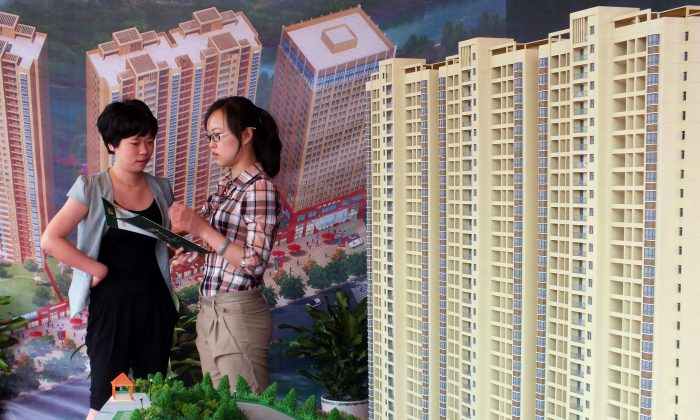 A Chinese homebuyer makes inquiries about a new apartment project on display at a real estate fair in Yichang, in central China’s Hubei Province on May 18, 2012. (AFP/AFP/Getty Images)
Opinion

Editor’s note: Since 2008, experts have predicted that a massive housing bubble in China was on the verge of bursting, yet the day of reckoning keeps getting postponed. The following dialogue has circulated widely on China’s Internet, posted by an anonymous netizen. It helps explain the psychology that keeps China’s housing bubble afloat.

At a karaoke bar, a middle-aged man sat with his nephew in a private compartment. “Uncle,” the nephew said, “No one is buying the houses we build. You must think of a solution fast.”

The middle-aged man glanced briefly at his nephew and turned to the table, where he grabbed a bottle of wine worth tens of thousands of yuan (10,000 yuan equals US$1,600). After pouring himself a full glass and downing it, he said to his nephew: “You don’t need to worry. All you need to do is construct the houses.”

The nephew, still not understanding, asked, “But why construct the houses if no one is buying them?”

“Don’t know much, do you, child? I’m not building houses to sell. Most people couldn’t afford them, anyhow. The construction is just a vanity project.”

Surprised, the nephew asked, “Where will the money come from if you do not sell the houses?”

“We will get a loan from the bank,” the uncle replied.

“Wouldn’t we need to pay it back?” the nephew asked.

The uncle explained: “Say I borrow 500 million from the bank and use only 200 million for investment and development. 300 million will be mine to keep. So it doesn’t matter whether I sell the houses or not.”

“After the houses are built, we will engage in speculation until the houses are worth a billion yuan each. We will gift some of the best houses to public servants.

“Once these public servants have many houses on their hands, they will do all they can to keep the value of the houses from dropping because if the value drops, it means the money they’ve got is disappearing. That’s how they will begin providing services for us,” the uncle said.

“But why wouldn’t we need to pay the bank back?” the nephew asked.

“Pay what?” scoffed the uncle. “We’ll use this billion-yuan house as collateral, and take out a loan for a new housing development. Just watch me get rich.”

“What if the bank runs out of money?” the nephew asked.

“No worries. The government will print more,” the uncle replied.

“Suppose it doesn’t?” the nephew asked.

“We’ll just announce bankruptcy and leave the houses for the government to deal with,” the uncle replied. “All my money is in foreign banks, anyhow.”

The nephew suddenly felt that he had learned something very important: Houses are not built for living in.