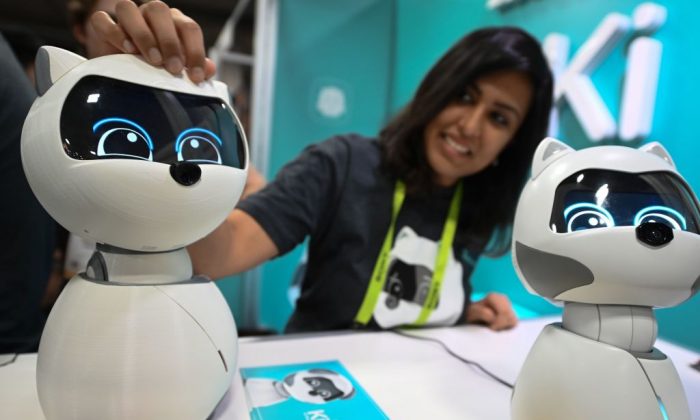 The Secret Lives of Robopets

There has been a great disturbance in the force, like a million chirpy robot voices crying out for owners.

This surge in companion robots is exemplified in a cutesy little bot called Kiki, whose appeal (beyond being adorable) is its ability to simulate mood changes through dynamic facial expressions, responding to its owner’s voice, and cheery chirps.

Kiki was designed with a dynamic personality in large part because it’s supposed to be a solution to loneliness. Its inventor, Mita Yun, grew up without any siblings or pets, and so wants Kiki to be a companion to people who might otherwise have lonely lives.

This isn’t quite the world that science fiction predicted. The fear was always that we would be stuck with murderously muscly Californian governor doppelgängers before we got R2-D2. But it appears that R2-D2 is winning out (yay!), for according to Wired, “There have never been more robots for companionship.”

Now, no one is going to shed any tears over this (unless you’re weird and have a thing for the Terminator). Like R2-D2, these new robopets will doubtless be delightful. It’s hard to look at a bot like Kiki without being charmed, and I for one would love a cute little robot that could putter around the house and keep my cat company when I’m away.

That said, I do wonder if friendly animatronics may sharpen rather than blunt the bite of isolation that plagues many Americans today.

For as Philip K. Dick, one of the great sci-fi writers of the 20th century, notes in his classic work about humans and robots, “Do Androids Dream of Electric Sheep,” “You can’t go from people to nonpeople.”

Think about that insight for a moment in the context of the relationships offered by people versus robots.

Because let’s face it, relationships are messy. Whether it be family, friends, or co-workers, having to cooperate with others requires a lot of sacrifice and not getting what you want.

By contrast, owning a menagerie of increasingly advanced and lifelike robots seems to offer all the companionship you could want with none of the messy strings attached.

Lest you think this farfetched, simply reflect on the impact smartphones and social media have already had on our relationships.

Now imagine if social media was a cute and cuddly robot.

Yet as Dick notes, “Owning and maintain a fraud [has] a way of gradually demoralizing [a person].”

This demoralizing disconnect can be clearly be seen in the kind of relationship that robots offer us. A robot is built to serve, and they offer us relationships on our own time and terms.

Real relationships don’t work like that. Any cat owner will tell you that a cat comes hardwired to be served. Our fellow homo sapiens also come with their own needs and desires, which can only be met through compromise and self-denial.

And that is where the real richness of companionship emerges.

By contrast, the more we substitute a fraud for reality, the more we insulate ourselves with robotic friends who give us their unlimited attention and require nothing in return, the more demoralized and lonelier we’ll be.

Because Dick is right, “You can’t go from people to nonpeople.”

David Evans is from Minnesota. This article was originally published on Intellectual Takeout.