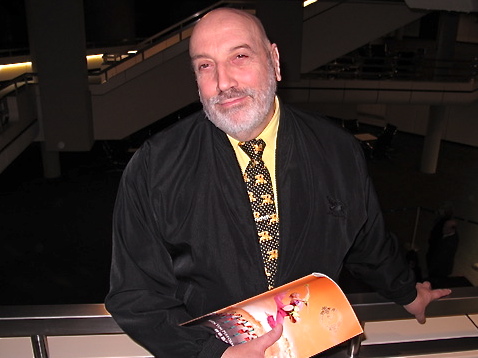 Acting Chairman of the CDU/CSU fraction German Federal Parliament member, Mr. Michael Meister and his entire family, including his elderly mother, came specifically to Frankfurt to see the show.

“My entire family, from my elderly mother to my little boy, was deeply impressed with the Shen Yun show.”

The Shen Yun website states, “A performance by Shen Yun is a presentation of traditional Chinese culture as it once was: a study in grace, wisdom, and the virtues distilled from the five millennia of Chinese civilization … At the core of Shen Yun’s performances is classical Chinese dance with China’s numerous ethnic and folk dance styles rounding out the evening.”

“This is the second time I’m attending the show and again I’m very impressed with the Chinese culture, especially since we are seeing stories from different time periods. But, more so as the show also touches on stories from modern times and how culture and power clash,” said Mr. Meister.

Shen Yun states on its website, “Every year, Shen Yun unveils an entirely new lineup of dances, songs, and musical scores. At the core of Shen Yun’s performances is classical Chinese dance with China’s numerous ethnic and folk dance styles rounding out the evening.”

“Seeing the show for the second time gives one a much different impression than the first time, because one already has an inkling what is going to be the content and one can experience the show on a much deeper level,” said Mr. Meister.

“What I’m taking home this time is that no matter what situation one faces, one can’t give up hope. Everything will turn out for the best. The last scene expressed this thought the best.”

“Last year I got a slight impression how the music, the songs and the dances interact and the progression of the different thoughts. This year I went there already knowing what to expect and it helped me looking at it with a much more open mind, because the first time around one doesn’t know what to expect and gets a surprise.”

“After more than 60 years of Communist rule in China, and especially after the Cultural Revolution, Chinese traditional culture has been all but completely demolished. However, the deeper spiritual core of the ancient culture, with its values of benevolence, honor, propriety, wisdom, and sincerity, as well as a reverence for the gods and the heavens, cannot be destroyed,” according to the website.

“I received great inspiration and was touched deeply during the last scene [‘Before Disaster, The Divine is Rescuing’]. On one side one saw the Chinese state’s might and on the other the hope and that the culture will persevere.”

According to the Shen Yun website, “Today, Shen Yun counts many winners of international dance and vocal competitions among its artists, and the orchestras include many musicians from world-renowned symphonies and conservatories.”

“The artistic level of the Shen Yun show is very high. The harmony between music, dance and song gives ample voice to this contention. Every single one exhibited an extreme high level of artistry,” said Mr. Meister.

“One must give ones highest compliment to the artists that developed to this point.”

“Shen Yun brings to the public beauty and harmony, a harmony also in the richness of the colors.”
The Shen Yun website states, “Shen Yun’s one-of-a-kind orchestra, with its all-original compositions, blends East and West like no other … The result—two great classical music traditions producing one fresh, unexpected sound.”

“For me the combination of Eastern and Western instruments represented an interesting combination. One knows the pure music of each, but this combination is truly interesting. I felt very comfortable listening to it. It was a very positive experience.”