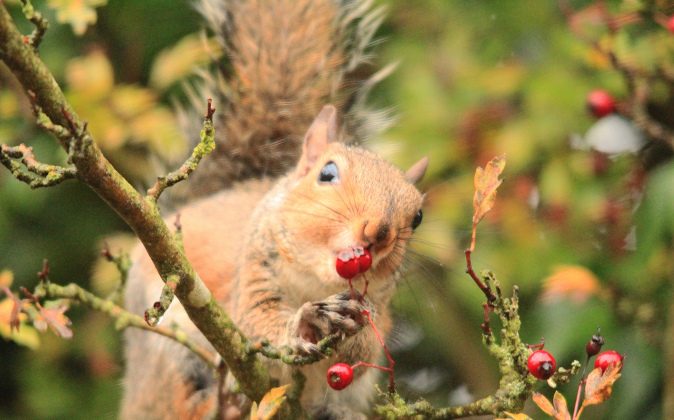 The National Trust has reported that the seasonal activities of plants and animals in the UK have been exceptionally early in 2014. Spring and summer have come early – and observations from some parts of the country even suggest that typical autumn events, such as the development of beech nuts and hawthorn berries, are already in evidence. But, to understand effects on our wildlife, a longer view is needed.

It’s clear from events recorded on the Woodland Trust’s Nature’s Calendar that the 2014 spring was indeed far in advance of 2013, which was one of the coldest on record. Not all the data is yet in, but for many events, such as the first flowering of bluebells or first sighting of peacock butterflies, average dates were between two and four weeks ahead of last year. Naturally, as the weather has continued to remain warm, it may follow that subsequent activity would also be ahead of schedule.

However, it is unwise to make too many assumptions based on anecdotal evidence when looking ahead. As yet Nature’s Calendar has received no data on the first autumn indicators such as ripe blackberries or rowan berries. The average date for the first sighting of ripe blackberries historically tends to be well into August.

This is a great opportunity for people to keep an eye out for these first signs and help track the arrival of autumn. However there is still plenty of opportunity for the weather to change dramatically. It’s still even possible that autumn 2014 will arrive later than average.

The events of 2013 and 2014 are a small part of longer-term changes in our natural environment. Colleagues and I at the Centre for Ecology and Hydrology recently led a study that gathered together more than 25,000 long-term data sets on the timing of seasonal events for more than 700 species of plants and animals. The study considered a diverse array of organisms including plankton, plants, insects, amphibians, fish, birds and mammals.

Between 1976 and 2005, we found that most seasonal events had shifted their timing so that they now occur earlier in the year than they did just a few decades ago. We know from other studies that average flowering dates for a variety of plant species in Britain have been earlier in the past 20-30 years than at any other point in the last 250 years.

Although it is clear that the biological seasons have been shifting in recent decades, not all species have shown the same degree of change in their seasonal activities. The CEH study showed that changes have been most rapid for many organisms at the bottom of food chains, such as plants and the animals that feed upon them. Predators, however, showed slower overall changes in the seasonal timing of their life-cycle events. This general pattern was mirrored in a recent study comparing changes in fish spawning times and seasonal peaks in plankton food resources in England’s largest lake, Windermere.

This is important because, for many animals, the seasonal timing of reproduction is often matched to the time of year when food supply increases – so that offspring receive enough food to survive. If predators cannot keep pace with changes in the seasonal pattern of prey availability then their breeding success may falter and populations may decline.

It’s important to know whether these changes pose a threat to plant and animal populations, and we are already examining the evidence for such impacts in birds. A key question to study is whether animals higher up the food chain will be able to adapt to these changes in order to ensure survival.

So, while year-to-year changes are noteworthy, it is the longer-term patterns, and knock-on effects, that are key to understanding how our wildlife will ultimately respond to changes in the seasons. Indeed, 2014 has been an interesting year to date – but the jury is still out on whether we will see more, or fewer, such years in the future.

This article was co-authored by Chris Hickman from The Woodland Trust.

Stephen Thackeray receives funding from the Natural Environment Research Council (NERC). Chris Hickman works at The Woodland Trust, which receives income from a range of sources including members and supporters, corporate partners, grants and trusts and individual legacies. This article was originally published on The Conversation. Read the original article.