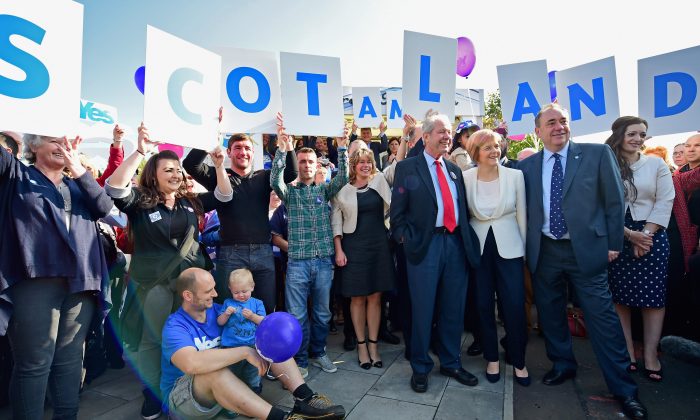 The Scottish Play: The Nationalists Win by Losing

Last week’s referendum on Scottish independence was an excellent illustration of the famous dictum of Frédéric Bastiat, the 19th-century French liberal economist, that the state is the means by which everyone seeks to live at the expense of everyone else. The defeated leader of the Scottish Nationalist Party, Alex Salmond, offered the Scottish people a vision of a fairer country (fairer than Scotland now, fairer than England ever), by which he meant larger subventions for more people, distributed by him and his party.

Not surprisingly, he did best in those areas where people had the most to gain from the promised subventions and where they believed that they were not getting their fair share of Scotland’s heavenly manna—oil and gas from the North Sea. This is not to say that those who voted against him were all sturdy burghers, anxious to stand on their own economic feet; many may have calculated that, with the oil and gas running out, the subventions would be larger and safer in the long run if derived from England rather than from the North Sea. But certainly most of those in the population hoping for some degree of independence from the state would have voted against him.

It was widely reported in the press that fear motivated the “No” vote, as if fear in politics were always an irrational emotion. But Salmond, the Chavista of the North, said that he would repudiate Scotland’s share of the British national debt, a pronouncement more than sufficient to sound alarm bells among the better-informed. And those who rejected independence (who turned out to be the majority of voters) were probably fearful, too, of the very enthusiasm of the opposite camp, which often took a mildly intimidating turn, as enthusiasm for political causes is apt to do. There were reports of people opposed to the Nationalists being branded traitors; the majority was, if not silent, distinctly muted.

The majority was also fearful that Salmond had not been specific enough about the many problems that would arise in the breakup of a union that had lasted 307 years. For example, would an independent Scotland offer citizenship to the million Scots living in England? Since they had not been allowed to vote in the referendum (though recently arrived immigrants were), to give them citizenship would have rendered the referendum upon which independence was based invalid; but to exclude them from citizenship would have seemed illogical and vindictive.

But though the referendum was lost, in certain respects the Nationalists won. Based on a single opinion poll in favor of independence, they panicked U.K. Prime Minister David Cameron into promising more powers to the Scottish government. This is an excellent result for the Nationalists: Edinburgh will have the powers, London the responsibility, especially when things go wrong. Moreover, London will be the lender of last resort in the event of Scottish profligacy, so that the Nationalists will probably be able to distribute more subventions after all. And if they can make enough people dependent on them, directly or indirectly, they will have won.

Another victory for the Nationalists is the arousal of what has never previously existed during my lifetime, English nationalism. If the English are excluded from Scottish affairs, why should the Scots have a say in English affairs? After all, Labor governments have often been completely dependent on the Scottish vote, which explains why the Labor Party was so opposed to independence. But if England were to have its own government, the distinct possibility arises of near-permanent political conflict between the English, Scottish, and British governments. England might eventually want to break free from the Scottish millstone.

The Nationalists have also achieved the reversal of the generally favorable view of the Scots in England. For the first time since I can remember, a mild dislike and irritation with them has become if not widespread, at least quite common. This is excellent news for the Scottish nationalists, who speak of hope and rely on antagonism.
Theodore Dalrymple is a contributing editor of City Journal, the Dietrich Weismann Fellow at the Manhattan Institute, and the author of many books, including Our Culture, What’s Left of It: The Mandarins and the Masses. This article originally appeared on the Manhattan Institute’s City Journal website.