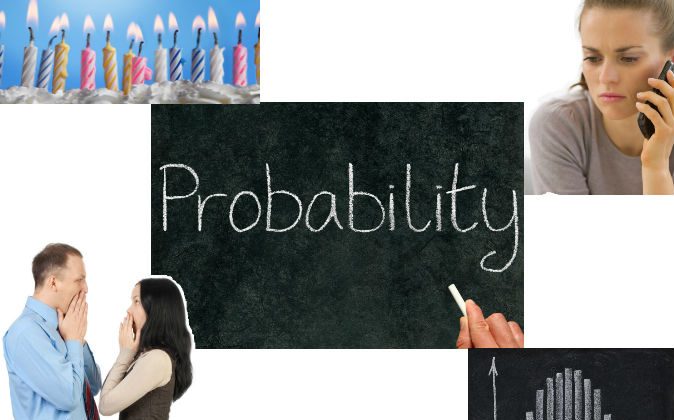 All images via Shutterstock*
Beyond Science

File image of woman on a phone via Shutterstock

“The fear in the stranger’s voice made me understand that staying with my husband was a mistake. When I met him at the airport, I told him my thinking had changed and he could not live with me,” the woman told Dr. Bernard D. Beitman, a professor of psychiatry at the University of Virginia. Beitman has called for the establishment of a new transdisciplinary field—”Coincidence Studies.”

In a 2011 paper, he looked at the different explanations various scientists or lay people would give for this woman’s coincidence. Some would say it’s statistically probable that among all the mis-dialed phone numbers in the world some such occurrence would happen eventually. Some would say the woman created this situation in some way or added meaning to it—she was dealing with a hardship in her life and maybe she is the type of person who tends to look for signs in her surroundings to advise her. Some would say she was being guided by a divine force. Some would admit that all of these possibilities could be true at once, that they are not mutually exclusive.

Beitman said that dismissing coincidence as a matter of chance “assumes that coincidences are inherently meaningless or insigniﬁcant. Without supporting evidence, this assumption is hardly scientiﬁc.” He recognized the difficulty in scientifically proving coincidences are anything more than chance.

Frederick Mosteller (1916-2006), founding chairman of Harvard’s statistics department, said in a 1980s study on coincidences: “We find it refreshing to be reminded that things that ‘we all know must be true’ can be very hard to prove.”

A look at probabilities makes some coincidences seem less surprising—such as winning the lottery twice or finding someone with the same birthday as you—but that does not necessarily prove coincidences are simply chance.

What Are the Chances?

Image of a bell curve via Shutterstock

Image of a birthday cake via Shutterstock

As for winning the lottery twice, it may not be as improbable as you would think. Odds were better than 1 in 30 for a New Jersey woman who won the lottery twice within a four-month period, said Mosteller, citing a study by Stephen Samuels and George McCabe of the Department of Statistics at Purdue University.

But what about the coincidences in which multiple factors seem to stack up?

Another example, one of many accounts found by Epoch Times in which multiple factors all line up to create bizarre coincidences, involves a set of twins who were separated at birth and adopted by different families. Both families independently decided to name the boys James. Both boys entered law enforcement—one as a security guard, the other as a deputy sheriff. Both married women named Linda. Both got divorced and remarried. Both remarried women named Betty. One named his son James Alan. The other named his son James Allan. When they eventually met, they discovered the eerie similarities in their separate lives. Their story is recounted in a People magazine article.

Probability a Description, Not an Explanation

“Vast numbers of coincidences arise from hidden causes that are never discovered,” wrote Beitman. He said probability “is not an explanation but instead is a description of what happens.”

In 1939, psychologist B.F. Skinner analyzed William Shakespeare’s sonnets and found his use of similar sounds, his alliteration, could have occurred coincidentally. Skinner stated, “So far as this aspect of poetry is concerned, Shakespeare might as well have drawn his words out of a hat.”

A painting believed to be the only authentic image of William Shakespeare made during his lifetime, c.1610. (Wikimedia Commmons)

He concluded that, although Shakespeare may have intentionally employed alliteration, it is possible for it to have happened by chance. One could also say then, that although coincidences could happen by chance, that does not mean intelligent design or some other force is not at play.

Coincidences have much to do with recall and recognition, said Beitman. Ruma Falk showed in a 1982 study that even how a story of coincidence is told can influence how surprising it is. Humans tend to seek patterns.

Beitman acknowledges this subjective aspect of studying coincidence, but he argues it does not have to be at odds with a scientific investigation.

“To notice a coincidence requires paying attention to one’s own thoughts, mental images, and feelings while also monitoring surrounding events. Some people seem coincidence-prone: that is, they possess a penchant for noticing coincidences that is not shared equally by other people,” he wrote.

He continued: “One of the biggest challenges in the development of the new discipline of Coincidence Studies is providing a systematic place in scientiﬁc research for subjectivity and for human consciousness. Meaningful coincidences depend upon the mind of the observer. The question of how to develop methods and an accompanying technical language that includes and respects the subjective element built into the fabric of coincidence needs to be answered.”

When Epoch Times asked him whether any universities had picked up on his suggestion of a Coincidence Studies discipline, Beitman answered via email: “I am not aware of any data based coincidence research going on right now, although there is plenty of theorizing and story collection. It will be years before this new field becomes part of a university course of study. Universities are notoriously conservative in including new ideas.”

*Image of the word “probability,” two surprised people, and a histogram via Shutterstock