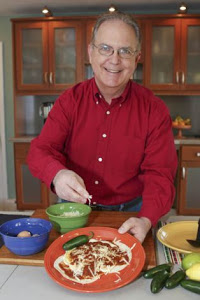 My Follow-up Conversation with Larry Sombke
By Get Busy Media

On June 20, I was lucky enough to reconnect with Larry Sombke, founder and owner of Larry’s Southwestern Sauces. I first spoke with Larry in March 2012 about the inspiration behind founding this company, how he reaches and has grown his customer base and how he engages customers through digital channels.

In this follow-up conversation, Larry and I discuss how he has expanded his distribution through brokers and new channels, while also touching on how he has amplified his efforts to reach potential customers through new online channels.

Q: Larry, it’s been 15 months since we last spoke. Fill me in on your last 15 months and how Larry’s Sauces has grown during this time?

The big change in the last 15 months was I went through the process of getting brokers. Brokers are the people who will become my sales staff. In the grocery industry, you have brokers who have relationships with the retailers and distributors. It’s a complex web of people who have known each other for a long, long time. It’s really hard to get into more than a few stores if you don’t have a broker.

I went through a period where I approached a couple of brokers and was turned down a few times, and was getting a little frustrated. Then, right around Thanksgiving 2012, my co-packer approached me with an idea: that I would join forces with them and I would become a part of their product line. So they now have taken on the burden of arranging for all of the brokers and the distributors. They have been in business for three generations and already have brokers and distributors who they work with. This is a major, major breakthrough.

Q: How has the distribution of Larry’s Sauces expanded since we last spoke? What new channels and stores have you entered? We spoke about Gluten Free Republic last year, and you mentioned that you were close to forming a partnership with them. I notice that you’re selling on Amazon now as well, tell me about that partnership and how it’s helping to drive your business forward.

Gluten Free Republic never came online, as far as I can tell. As far as I know, they don’t exist. But I am in three online catalogs that work pretty well. One is Amazon. Amazon has a million fees, so I started out with their premium. They charge you every month to have this premium presentation. That didn’t work out, I wasn’t getting enough orders. So I went back to basics. I get an order once a week, once every couple of weeks with Amazon.

One of the reasons I use Amazon is because it’s a recognizable name. People are impressed that I’m in Amazon.com. It’s a type of advertising.

Because you’re in Amazon, it helps move you up in the search engines a little higher. This is one of the main reasons why I am involved with Amazon.

AbesMarket.com is a national online seller. They are good because I sell quite a few jars a week through them. And I don’t have to do the fulfillment. I ship it out to them and they do the fulfillment. It’s a good business for me and it provides me with a good web presence.

I’m also in VeganCuts as well. This provides me with a good web presence and good presence with a niche market. My products are so vegetarian, they are vegan. It’s good, once again for a few sales and being in a niche market. This is how I’m managing my online catalog presence.

Q: Sounds like you have been busy attending national specialty food shows. How have these shows helped your business?

Last summer was the first big show I went to. I went to Fancy Food Show in Washington DC. Also in September, I went to the UNFI Tabletop Show in Chicago. Then I went to the Fancy Foods Show in San Francisco in February. In a week, I’ll be at the Fancy Foods Show in the Javits Center in New York City.  These shows are more for making connections; you don’t make a lot of big sales. One of the problems with those shows is a million vendors come around. If you’re not at some shows, you’re not a player. Even though they’re expensive, you have to be at some of these shows.

Because I have this relationship with my co-packer, Casa Visco Finer Foods in Schenectady, New York, because I’m with them, they present my products at shows that they attend. Distributors who have all of the grocery stores will attend these types of shows. I’m at a point now where I’m definitely going to do this show at the Javits Center. I’ll continue to partner with Casa Visco to do some of their shows. I’ll probably also go to the UNFI Show, maybe one of those a year. They’re a little expensive. Once again, you see people, you develop relationships and you are a player. You’re in the business.

Q: How are you continuing to use and tweak your social media marketing and digital marketing efforts?

Mad Mimi is a wonderful vehicle to keep your face in front of important decision makers. I have about 1,600 names on my email list. This includes everything from people who own Mom and Pop stores in Hammond, Indiana to people who are decision makers at the big distributor corporations and also, the media. I do that every two weeks and I lead with a recipe, then I tell them about the things that I am doing. Mostly it’s the recipe. I find that recipes are the way to get people’s attention, to show them how to use the product.

I’m finding that some people are deciding to share it, which is great. I can track that and see who’s opening up and reading it. I assume, from what people are telling me, that at least, the execs are looking at it.

I’m in the 15-17% open rate range. 20% is considered dynamite. So if I’m in the 15%-17% range, then I feel pretty good about my newsletter. When I do the newsletter, I also will then take the photo and post this on Pinterest. Pinterest is followed by women, 20-40 year old women, which is really good for recipes and cooking. I post it on Pinterest and from Pinterest; the post automatically goes to my Twitter feed, which then automatically goes to my Facebook page. I’m starting to integrate these different social media platforms.

My daughter, who’s 22, signed me up on Instagram. I have a social media presence that I find to be pretty valuable.

Q: You beat me to it, but I know that when we last spoke you were just dipping your toes into Pinterest. Do you have any insights into how much traffic Pinterest is driving for you?

I know that I’m getting new followers and new pins from people all the time. With my blog, I can go right in and see all kinds of statistics. With Mad Mimi, I can get all kinds of analytics. So far with Pinterest, I haven’t figured out analytics yet, I’m still working on that.

I have found advertising on Facebook to not be so valuable. The reason I have decided not to do anymore of that for the time being is because the people who will like your ads on Facebook, they’re not necessarily people who are going to go out and buy your product. They seem to be the type of people sitting around late at night, clicking on ‘like.’ I did them all of last year and I think I spent $1,000. I don’t think I got any ROI on Facebook advertising.

Q: I also notice that your site appears to be re-designed since I last checked it out. What sort of changes have you made to the site?

I did a little bit of a web redesign six months ago. I use a guy locally, that’s his specialty, is web presence web design. He’s telling me all the things that I should do. I can only manage so many different things. With the way I have things set up, with my blog as a website, Feedburnerit’s easy for me to refresh that, move things around and add new posts to the blog as often as I want. I have it hooked up to Feedburner. Not too many people have signed up for Feedburner. When I post something to my website, I will then send it out using my Feedburner email. I find that if I send things to reporters using Mad Mimi, I get a lot of bounce-backs. Their servers are set up to not accept mass mailings. If I take that and send that through my email system, I get better penetration. I don’t get that many bounce-backs.

Q: I know when we last spoke you were thinking about re-branding your company, and shortening the name to just “Larry’s Sauces.” Are you still going with “Larry’s Southwestern Sauces?”

I do want to make that change. In my presence, I usually just say “Larry’s Mole Sauce.”  I do want to shorten that. I was browsing around on the web…I can put a dedicated URL in there rather than using this long URL that I use now. I’m going to do that. I need to sit down and do it again. I own that URL Larrysauces.com, so I’m trying to decide whether to stick with Larrysauces or go with Larryssauces.

Q: What’s next for Larry’s Sauces?

Larry SombkeWe’re starting to get penetration….after a year; I’m now going to be in all ShopRite stores in the Northeast. They have about 250 stores and I know that I’ll be in 40 of them right away. They have cooperative relationships with another 200 stores, so I know I’ll be in a lot of ShopRite stores. I also got into Fairway stores down in New York City. I want to build my New York City presence. ShopRite is also in the greater New York City area as well.

I’m within about 150 miles of 30% of the US population. I really want to push my way harder into the New York City market through my new broker system. I’m making a big push into the Midwest now, getting into Minnesota, Missouri, Ohio and Pennsylvania. We’re also going to get down into a big grocery store chain in Texas, called H-E-B.

By the end of this year, we’ll be strong in the Midwest, Northeast and Middle Atlantic states.

Jim Armstrong is the Co-Founder of Get Busy Media and a paid search specialist. Since 2008, Jim has built his knowledge around emerging media and leveraged several experiences to develop a keen understanding of internet marketing. He currently works for Resolution Media, as a senior advertising strategist.