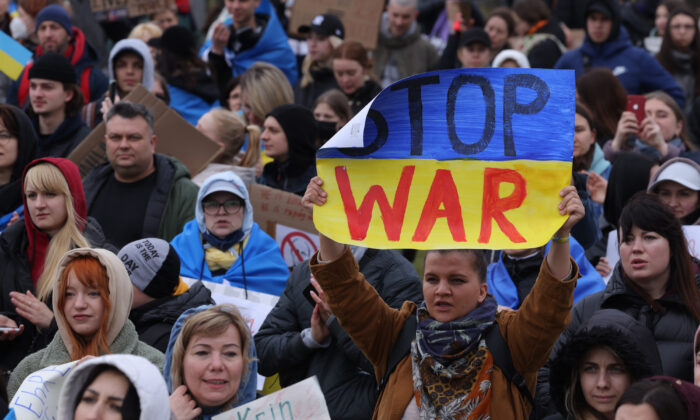 Protesters attend a demonstration against the Russian military invasion of Ukraine in Berlin, Germany, on April 6, 2022. Several thousand protesters, most of them Ukrainians and many of them refugees, attended the demonstration, in which protest leaders called for a full embargo against Russia and an end to civilian deaths in the war. (Sean Gallup/Getty Images)
Business Columnists

The Russo-Ukrainian War: A New Opportunity for Demagogues to Destroy Freedoms at Home 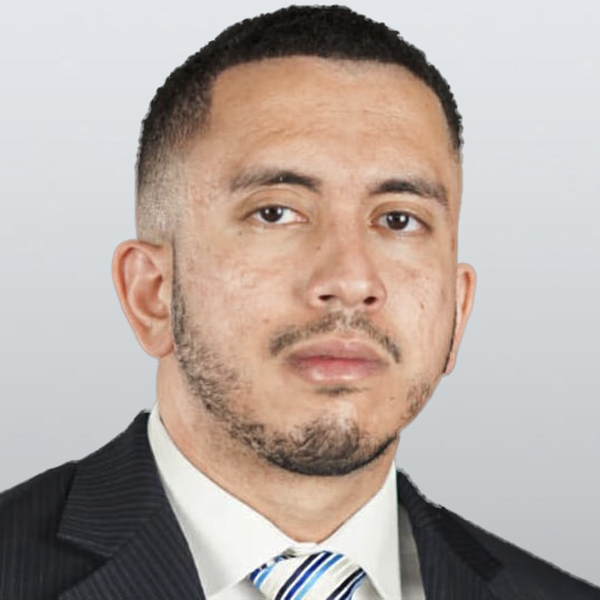 Politicians thoroughly enjoy times of war. Periods of bellicosity are when the most power-hungry members of the political class indulge in their most depraved political fantasies. The Russo-Ukrainian War has been no exception to this trend.

Since World War II, Western politicians have taken advantage of the largest conventional military conflict on European soil to crack down on civil liberties at home and drag their countries closer to an open conflict with a nuclear power. The domestic measures Western governments have pursued have been particularly breathtaking.

For example, the European Union has already banned Russian state media outlets such as RT and Sputnik for allegedly spreading disinformation. In the United States, which has stronger free speech protections, the assaults against freedom of expression had taken a more corporate hue. For example, Big Tech juggernauts such as Google have enthusiastically blocked channels receiving funding from Russia.

Even more egregious have been the actions of EU and North Atlantic Treaty Organization members such as the Czech Republic and Slovakia. These countries have criminalized any behavior that could be construed as being in support of Russia’s invasion of Ukraine.

The corporate press and governments are setting a startling precedent. The definition of “pro-Russia” content could be potentially broadened to attack antiwar activists and noninterventionists who are skeptical of Western countries trying to get involved in the Russo-Ukrainian war.

While the Russian invasion of Ukraine is horrific, there needs to be honest discussions about this invasion and what led up to it. International relations scholar John Mearsheimer has talked about how U.S. foreign policy moves such as NATO expansion helped create the conditions for the present great-power tragedy. For simply putting forth an alternative theory for what caused the present security crisis, Mearsheimer was nearly subjected to a struggle session by University of Chicago students, who adamantly refused to entertain the professor’s contrarian views.

Given the recent trajectory, it would not be a stretch to suggest that even realist critiques of Western foreign policy could be subject to social and political sanctions. The simple act of pointing out that the United States’s geopolitical ambitions have played a significant role in creating the present instability could be treated as “pro-Russian” speech if deep state proponents have their way.

Dissidents getting punished for their antiwar views is nothing new in American history. Socialist leader Eugene V. Debs learned this the hard way during World War I. To make sure that America’s war effort went unchallenged, the Wilson administration passed the Espionage Act in 1917, followed by the Sedition Act in 1918.

These bills imposed harsh criminal penalties. On June 16, 1918, Debs gave a speech in Canton, Ohio, imploring attendees to resist the World War I draft. Debs’s actions eventually landed him in trouble with the law, and he was charged with 10 counts of sedition. The socialist activist received a prison sentence of 10 years and faced a lifetime of disenfranchisement.

It took a pardon from President Warren G. Harding, one of the presidents most pilloried by court historians, to finally get him out of jail, and Debs was released toward the end of 1921.

Later, during the Vietnam War, there were several cases of the FBI surveilling antiwar groups or even infiltrating them to hinder their effectiveness. As Randolph Bourne proclaimed in an unfinished manuscript, “War is the health of the State.” It remains so, as Western governments are working overtime to augment their power during a great-power conflict.

Self-proclaimed liberal democracies already showed their true colors during the COVID-19 pandemic, when they treated their citizens like mere cattle to be poked and prodded by whimsical technocrats. Now, as the Russo-Ukrainian War rages on, they’re further manifesting their pent-up tyrannical desires.

An integral part of the West’s unique value proposition is its respect for civil liberties, something countless societies have never enshrined in their governing documents. But now, that has drastically changed. The haughty rhetoric coming from Western governments about being pro-freedom is vacuous at best when their actual behavior is observed.

The irony here is that the West has fallen down the classic “you become what you fight” path. The very Western countries that pound their chests about their exceptionalism are now morphing into the countries they rail against.

Politics is not without a sense of irony.

José Niño
Follow
José Niño is a freelance writer based in Austin, Texas. His Substack is "Jose Nino Unfiltered."