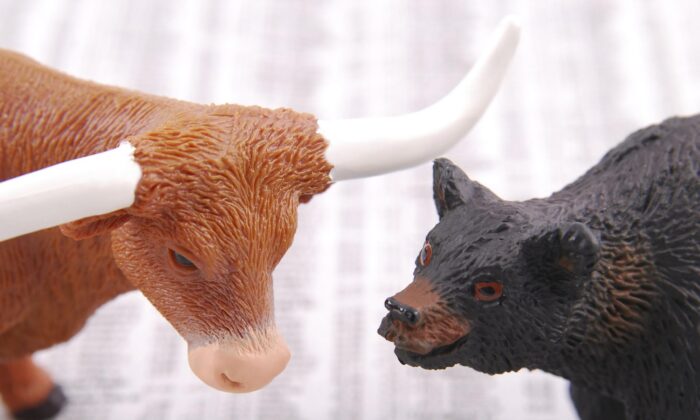 Bull markets are fueled by optimism and bear markets—which occur when stock prices fall 20 percent or more for a sustained period of time—are just the opposite. (Benzinga)
Business Columnists

The Rule of 20 and Why the Bear Market Remains

The “Rule of 20” says the “bear market” may just be resting despite much commentary to the contrary. In a recent Investing.com article, Bank of America strategist Savita Subramanian warned clients that stocks are still expensive despite this year’s drawdown.

“Our analysis of the ERP indicates a 20% likelihood of a recession is now priced in vs. 36% in June. In March, stocks priced in a 75% probability of recession. Even on Enterprise Value to Sales, where sales should be elevated by the tailwind of 9% CPI, the market multiple is excessively elevated (+40%) relative to history – possibly because real sales growth ex-Energy is essentially flat.”

Such is a critically important point due to the massive influx of capital in recent years.

With the Federal Reserve reversing that monetary accommodation, such poses a very significant, and likely unrealized, risk to investors. Such brings us to the Rule of 20, which suggests the stock market is substantially overvalued, as BofA noted.

“Outside of inflation falling to 0%, or the S&P 500 falling to 2500, an earnings surprise of 50% would be required to satisfy the Rule of 20, while consensus is forecasting an aggressive and we think unachievable 8% growth rate in 2023 already.” — BofA

Unfortunately, the last time the Rule of 20 was overvalued was in 2007. That was when Howard Marks wrote that passage above. In other words, while things always seem different, they are almost always the same.

The Rule of 20 helps us think about valuations and bull and bear markets. To calculate the Rule of 20 we combine the P/E ratio and inflation rate. Over the years, markets have shown a distinct tendency to revert to a sum of 20 for these two metrics.

The value of the markets is fair when the sum of the P/E ratio and the inflation rate equals 20.

This seemingly simplified insight is nonetheless surprisingly effective, as noted by Evercore ISI for the Rule of 20.

The rule peaked at the 2nd highest level in history earlier this year. Such levels suggest the market is more than “fully priced.” Regardless of what definition you choose to use.

As Howard Marks noted, the math suggests forward 10-year returns will be substantially lower than the last.

In a market where momentum drives an ever smaller group of participants, fundamentals become displaced by emotional biases.

If This Is a Bear Market, We Have More to Go

As I noted in “Don’t Fight the Fed,” David Einhorn once discussed the problem with valuations concerning the market in 2008.

“The bulls explain that traditional valuation metrics no longer apply to certain stocks. The longs are confident that everyone else who holds these stocks understands the dynamic and won’t sell either. With holders reluctant to sell, the stocks can only go up – seemingly to infinity and beyond. We have seen this before.”

Such is the problem that investors face today.

With the Rule of 20 very elevated, the Fed reversing monetary accommodation, and inflation and wages impacting earnings and margins, the risk of a further bear market decline is not entirely unreasonable.

As monetary policy becomes more restrictive and high inflation erodes economic growth, the market will have to reprice for lower sales, margins, and earnings. As such, if we are indeed in a bear market and not just a correction, then we have more work to do.

Even the 1974 Bear Market, where the Fed was hiking rates to fight high inflation, suggests the same.

Currently, with investor complacency surging and equity allocations still near record levels, no one sees a severe market retracement as a possibility. But maybe that should be warning enough.

With the Rule of 20 elevated, the risk of lower returns is significant. Such is particularly evident due to the “pull forward” of returns over the last decade due to repeated global Central Bank interventions.

The outsized returns, above the rate of economic growth, are unsustainable. Therefore, unless the Federal Reverse remains committed to a never-ending program of zero interest rates and quantitative easing, the eventual reversion of returns to their long-term means is inevitable.

Such will result in profit margins and earnings returning to levels that align with actual economic activity.

The only question is when the markets begin to realize it.