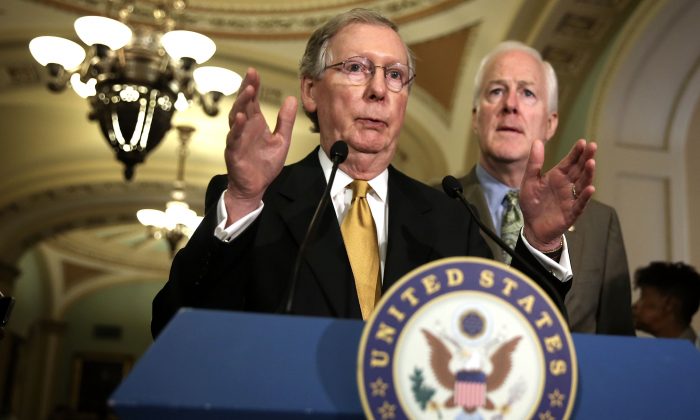 The Roots of Partisan Gridlock in the Senate

As immigration reform struggles to be born, one political analyst searched for the roots of gridlock in the Senate.

A group of “Gingrich Senators,” who served in the House after 1978, are responsible for nearly all the party polarization in that body, according to Dr. Sean Theriault, associate professor of political science and distinguished teaching professor at the University of Texas at Austin.

When former Speaker Newt Gingrich was elected to the House in 1978 he brought a new hyperpartisan style, which led to a government shutdown in 1995-1996, foreshadowing the repeated fiscal cliff impasses, the nation’s credit downgrade, and the sequestration.

Some who came after Gingrich was elected don’t know anything other than ideological name-calling and personal obstruction, Theriault said.

A casual attempt in 2011 to build collegiality supported his theory. U.S. Senator Al Franken (D-MN) wanted to try a secret Santa anonymous gift exchange to defuse tension, and he knew it had to be bipartisan. Republican Mike Johanns of Nebraska supported the Yuletide proposal.

For the senators not in the tea party, 70 percent of senators took part. Yet, among “Gingrich senators,” only 20 percent did the gift exchange.

“Imagine if half of your office would not take part in something like that, because they did not want people to get along,” said Theriault.

Theriault counted roll call votes, support for filibusters, and Sunday morning talk show appearances, and tracked who offered amendments and who forced votes on amendments. He found the so-called Gingrich senators acted differently than others.

An ugly partisan tactic is to add a controversial amendment to a bill, just so that a colleagues’ vote can be used against him or her in the future. The incumbent’s ‘no’ vote will appear in campaign ads in his next home state primary or election.

Theriault said it scares him when he sees senators introducing 24 of these amendments.

He said he wished he had written an op-ed when gun control legislation died. It died from partisan tactics. Immigration reform, which is badly needed and should be bipartisan, is in danger of the same kind of derailment, in his opinion.

Before the Civil War, Senator Preston Smith Brooks (D-S.C.) nearly killed Senator Charles Sumner (Free Soil-Mass.) on the Senate floor. Some have that kind of hostility today, but “they aren’t even fighting for big issues,” said Theriault.

“It’s not about ending slavery or dissolving the Union,” he added. “It’s just about getting reelected.”

The Senate of the mid-20th century, venerated by many, “is but today a distant memory,” Theriault stated in a press release. “Electioneering on the Senate floor, playing games with the legislative process and questioning your fellow senators’ motives have become commonplace.”

He hopes citizens will demand something better.

“It’s a cycle that feeds itself. It’s not the compromisers who are winning primaries. The only way out is … when the American public decides they have had enough and decide to elect people who will sit down and compromise,” he said.

Most Americans are moderate and want legislators to work together to solve the nation’s problems, in his opinion. Highly partisan people are a minority, only 5 to 10 percent, yet they are visible and vocal. “You don’t get a raging moderate writing letters to the editor.”

Nonetheless, he does feel hopeful because people are still engaged in civic matters. “At the end of the day, 60 percent of us are still voting in presidential elections.”

His new book is “The Gingrich Senators: The Roots of Partisan Warfare in Congress.”