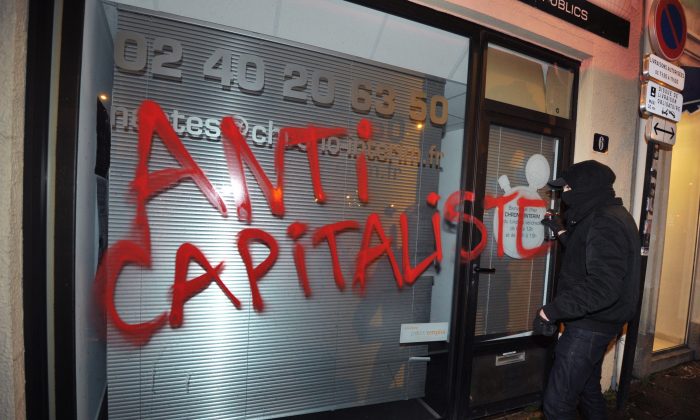 A member of the Antifa extremist group vandalizes a storefront in Nantes, France, on Feb. 14, 2014. (FRANK PERRY/AFP/Getty Images)
The Dead End of Communism

The Root of Identity Politics

In the United States and other democratic nations, narratives on racial inequality, social justice, and other issues dominate an increasingly divisive and polarizing political culture.

As an article by the National Review reads: “Americans have grown increasingly accustomed to the view that your politics are determined by your racial, ethnic, or gender identity.”

Prevailing leftist discourses frame appropriate forms of identity politics as opposition to social phenomena, such as racism, sexism, or perceived oppression of minorities by groups considered to possess undue privileges and power.

But despite stated opposition to these things, activism and political agitation based on group identity in fact causes and encourages people to view and judge others according to their gender, color of their skin, and other politically-charged social attributes—ironically causing them to become the discriminators they rally against.

Visceral manifestations of identity politics can be witnessed in a recent spate of violent incidents where members of the far-left extremist group “Antifaschistische Aktion” (Antifa) and other radicals clashed with groups of protesters including conservative activists and small numbers of white supremacists.

Beyond race, gender, or other notions of social and political groupings, identity politics has common roots with the Marxist idea of dialectical materialism and class struggle.

Dialectical materialism is a theory for understanding all politics, history, culture, and natural phenomena as a process of continuous conflict and struggle.

As explained in a previous Epoch Times article, “the communist dialectic looks at various issues in society, identifies their polar opposites, then takes their inversions as the communist viewpoints—which it then pushes as being absolute and unquestionable.”

Communist leaders such as Vladimir Lenin and Mao Zedong relied heavily on this theory to seize political power and establish the world’s two most murderous regimes, the Soviet and Chinese Communist Parties. These movements utilized resentment present among the working class and were catalyzed by the trauma of their host nations’ military defeats.

After coming to power, the Soviet and Chinese communists launched campaigns against classes of people accused of being oppressors, such as landlords, “rich” peasants, the nobility, and clergy. Tens of millions of people were killed as a result of these identity politics.

In Nazi Germany, Adolf Hitler used identity politics to paint Jews, eastern Europeans, and other ethnic and religious groups as inherently conflicting with the prosperity and survival of the German nation and the Aryan race.

By equating individuals with their race or social group, academics and activists who engage in identity politics make ideologically colored and extremism-prone judgements about their moral character, actions, and intentions.

While neither communism nor Nazism was capable of taking root in mainstream American society, the socialist Frankfurt School of sociology rose to prominence in the postwar U.S. academic community.

The concept of “critical theory” pioneered by scholars of the Frankfurt School expanded the economic-centered dogma of classical Marxism to include provisions for looking for and exacerbating contradictions across all facets of society and the human experience.

In his work “Dialectics and Logic” Marxist theoretician Georgi Valentinovich Plekhanov held that the communist dialectic follows the three laws of identity, contradiction, and to “exclude the middle.”

Decades after the Frankfurt School began their transformative work, the willful lack of nuance in contemporary U.S. political discourse and activism is all too apparent. In the 2016 U.S. presidential election, Democratic Party candidate Hillary Clinton typecast supporters of her rival, Donald Trump, as “deplorables;” criticism of Trump before and after his victory was characterized by violent political riots and obscenity-laced slogans.

For the identity-oriented political activist, Trump, his administration, and his supporters have been slapped with political labels of racism, sexism, and others. By conflating their political opponents with such absolute moral negatives, groups like Antifa and their supporters have been manipulated to see violent and uncivil forms of politics—as the totalitarians of the past demonstrated—an ethical and political obligation.

Traditional wisdom as embodied in the teachings of ancient sages like Jesus, Confucius, and Shakyamuni calls for a middle path on the way to moral elevation. Throwing out this heritage, identity politics and the communist dialectic that inspired it are harbingers of struggle and disharmony.