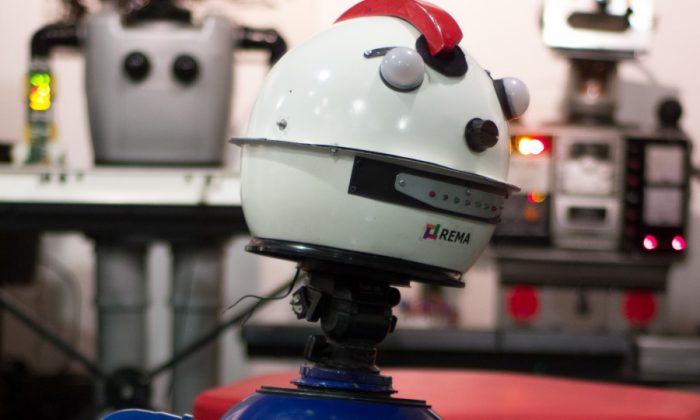 The Robots Return to Prague at Cafe Neu Romance

Invasion of the robots? More like a return home. This week at the National Technical Library in Prague is Cafe Neu Romance the first (to their knowledge) robot performance festival in the world.

Prague is a fitting location for a robot performance festival, having given birth to the word ‘robot’ in Karel ?apek’s 1920 play R.U.R. (Rossum’s Universal Robots).

The brainchild of Christian Gjørret, Cafe Neu Romance is a combination of films, performances, music, photography, and discussions, all either about or by robots.

The goal is to remove the barrier that tends to exist when the public interacts with robots at trade shows or galleries, and create a forum for discussion.

“Why not invite all of [the robot builders and artists] to a cafe, where they can meet each other in a laid back way, and present their works, stories, experiences, in different kinds of expresions to the general public,” says Gjørret.

Events include multiple screenings of the film “Bots High” (a film I directed) on U.S. high school robot builders and “J, Robot” (directed by Michael Garrigues) on robotics in Japan. Jana Horáková, a ballerina turned professor of early robotics, gave a lecture about ?apek and the origin of early robots. And you can’t go wrong when you mix alcohol and robots, with a presentation by the creator of Roboxotica (BarBot is the U.S. version).

Tons of LEGO Mindstorms are on hand to play, build, and watch, including a model of the Mars curiosity rover.

Gjørret only sees the festival getting bigger each year, and is filming everything at this festival to create a documentary to build momentum for next year.

The festival runs from November 26 – 29 at the National Technical Library in Prague.

Joey Daoud is a documentary filmmaker and photographer. Follow him on Twitter @C47 and view his work at www.joeydaoud.com.