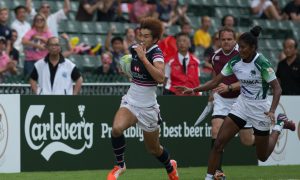 The Road to Rio: the Asian Rugby Sevens Qualifier Day-1
0 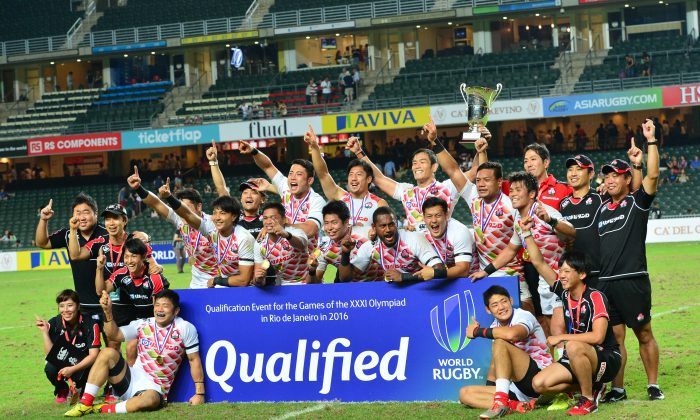 The Road to Rio: the Asian Rugby Sevens Qualifier Day-2

HONG KONG─The second and final day of the qualifying tournament for the 2016 Rio Olympics took place of Sunday Nov 8, 2015.

Men
Both Men’s Groups finished precisely to form, setting up the expected semi-finals, Japan vs. Sri Lanka and Hong Kong vs. South Korea.

Japan continued their impressive form from the Group and trounced Sri Lanka 43-0 in the first semi-final.

In the second semifinal, Hong Kong and South Korea contested a much closer match. Hong Kong eventually won 19-10. Korea opened the scoring, Hong Kong replied, and by halftime the score was 14-5. A yellow card against Hong Kong in the second-half gave Korea a scent of victory, but they could not make the extra man count. Once Hong Kong restored parity they added a final score to close out the game 19-10.

The final was between Japan and Hong Kong: Japan, the overwhelming favourites versus Hong Kong, the hometown heroes. In the first half, Hong Kong rattled and pressured Japan. They became the first team to breech the Japan defense, not once but twice; and led at half time, 10-0, with tries by Max Woodward and Alex McQueen. This was a match of two halves. Japan came back strongly in the second-half: and with for four minutes remaining had regained the lead, 12-10. Japan then dealt a hammer-blow to Hong Kong’s aspirations, with two quick tries to break Hong Kong’s heart and seal victory, 24-10 and take that coveted qualifying slot at Rio.

In 3rd and 4th play-off, South Korea beat Sri Lanka 26-21, in an entertaining match that saw Sri Lanka claw their way back into the game, but left themselves too much to do with too little time. South Korea deservedly held on for third place.

Women
There were two more rounds of matches before determining the finalists. The first game of significance was Hong Kong versus Kazakhstan. The Kazakh team proved the stronger, played better rugby, held possession and moved the ball wide to expose Hong Kong, and won comfortably 20-12.

In the next round, China upset Japan winning 12-5. China played with more precision, defended well, and forced Japan into uncharacteristic errors. The result did not alter the Group standings. Japan topped the Group but with equal points with Kazakhstan, but had a better points difference.

The final was a repeat of the opening match, Japan versus Kazakhstan. This time Japan did not let the physicality of the opposition upset them. They controlled possession and territory, and by half-time had scored three tries and established a 17-0 lead. Their task was made easier by Kazakhstan suffering a yellow card in both halves. Japan was the better team; their handling slicker, their tackling robust and their speed around the pitch impressive. The final score was 22-0, a thoroughly deserved victory, and one precious step closer to Rio.

In other games, China and Hong Kong contested another close match for 3rd and 4th. It was again spirited Hong Kong tackling that eked out victory. Hong Kong went ahead, China responded and in the second half, Aggie Poon broke through the Chinese defense and literally walked, almost exhausted, to the line to convert her own try. It gave Hong Kong a gritty 12-7 victory, much to the delight of the crowd.

At the end of the weekend, the Japan men’s team is heading to Rio, with Hong Kong sadly falling at the final hurdle, but not before they proved themselves worth opponents. The Japanese women, by winning their competition, are one step closer to joining them.