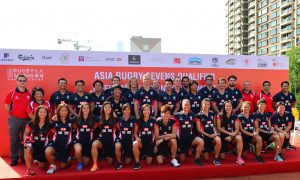 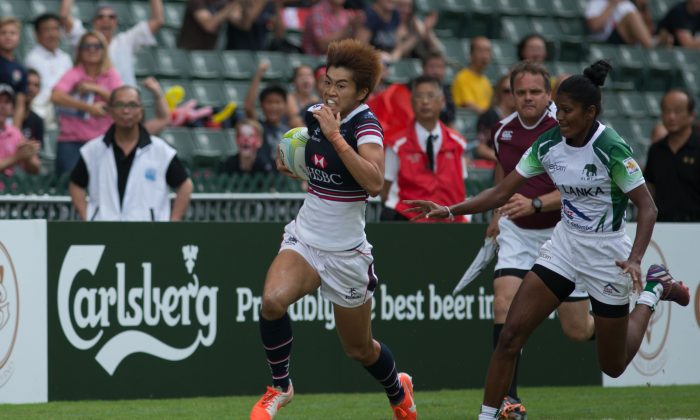 The Road to Rio: the Asian Rugby Sevens Qualifier Day-1

In front of an almost empty stadium, day-1 of the qualifying tournament towards the Asian representative Rugby Sevens teams at the Rio Olympics next year, for both men and women, kicked-off in Hong Kong on Saturday morning Nov 7, 2015, at the Hong Kong Stadium. The winner of the men’s event qualifies for Rio, the winner of the women’s event progresses to the next qualifier in Tokyo.

In Group A, Japan was absolutely dominant, winning all their matches on Day One, amassing 149points, including 23tries, and not conceding a point at all. Japan beat Singapore 66-0, Chinese Taipei 38-0, and South Korea 45-0. Japan is the form side and team to beat. The runners-up in Group A will probably be South Korea. They edged China in a close match 19-14 during the morning session, which should be sufficient to secure a semi-final spot.

In Group B, Hong Kong and Sri Lanka set the pace. Both teams won their opening matches. The final game of the day determined the Group leader. Sri Lanka raced to a 12-0 lead, breaking through patchy Hong Kong defense. But Hong Kong regrouped, kept possession, played tighter rugby and scored 27 unanswered points to win 27-12. Hong Kong faces Malaysia on Day Two; a win will see them top the Group. Sri Lanka, having beaten Malaysia 24-10, despite being reduced to 5 men in the second half, will be runners-up in Group B, and the other semi-finalist.

Kazakhstan gave Japan an early scare. Japan narrowly won 7-5, but not before Kazakhstan led at half-time 0-5. Japan came back in the second-half with a try and conversion, that went in off the post; and then held on whilst Kazakhstan squandered chances to win.

The Group came to life in the afternoon, when Hong Kong beat China in another close match. Aggie Poon scoring the only try towards the end of the first half. Both teams had gritty defense, especially the physically smaller Hong Kong team. A yellow card against China with 2mintutes to go in the second-half, gave Hong Kong a deserved edge, and helped them see out the match.
Later on, Kazakhstan again proved stern opposition; this time against China. They went out to a 10-0 lead by half-time with 2 tries by their impressive winger Lyudmila Korotkikh. China gamely came back in the second-half narrowing the score-line to 10-7. Kazakhstan scored again, China responded, but Kazakhstan had the final word with a well-worked try, rounding off the score to 22-12.

Japan later eased to a comfortable 36-0 victory over Hong Kong, scoring 6 unanswered tries. By half time Japan was already 19-0 ahead. They dominated possession and had the benefit of the referees whistle. It was uphill for Hong Kong, who missed key tackles and had player yellow carded. Japan was supreme. They stamped their authority on the Group and clearly the team to beat.

In tomorrow’s key fixtures in the women’s Group; Hong Kong face Kazakhstan. The winner of this match will be finalists. And finally, Japan face China. Japan will wish to keep their unbeaten record, and China would like to restore some pride.

On Day One, the men’s matches went to form throughout the day with no surprises. The women games did not. Hong Kong upset China. Later Kazakhstan, who should have edged Japan earlier in the day, also beat China. In both divisions, men and women, Japan look to be in different league to the rest of Asia, and the men can start making a tentative flight booking to Rio.