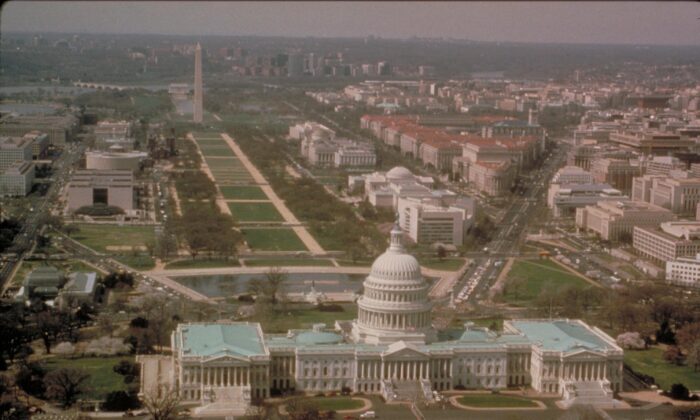 An aerial view of the National Mall from behind Capitol looking toward Washington Monument, on Nov. 18, 2003. (NPGallery.nps.gov)
Policies & Impacts

The Road to FOIA Was Paved With Good Intentions

Benjamin Weingarten
Ben Weingarten is a fellow of the Claremont Institute and co-host of the Edmund Burke Foundation’s “The NatCon Squad.” He is also the founder & CEO of ChangeUp Media and the author of “American Ingrate: Ilhan Omar and the Progressive-Islamist Takeover of the Democratic Party.” His website is BenWeingarten.com
View profile
Follow
and RealClearInvestigations

The federal Freedom of Information Act has been contentious ever since its enactment over a half century ago, naturally pitting citizens seeking to hold their government to account against officials whose impulse, nefarious or not, is to control information. Decades later, it is by and large a case study in good intentions gone awry.

When FOIA became law in 1966, it was the culmination of an 11-year push in the House and nearly six years of Senate deliberation. It prevailed over the initial objections of the 27 federal agencies and departments whose officials testified during hearings over the bill, and despite reported opposition from President Lyndon B. Johnson.

But the clinching 307-0 vote in the House vindicated the efforts of the bill’s creator, Rep. John Moss, a Democrat from California. He was ultimately able to muster such overwhelming bipartisan support with co-sponsorship by a young Illinois Republican, Rep. Donald Rumsfeld.

Moss had for years presided over hearings shining a light on government secrecy as the chair of the Committee on Government Operations’ Foreign Operations and Government Subcommittee, on which Rumsfeld also sat.

His Illinois colleague, the future Defense Secretary under the second President Bush, argued for the legislation by chiding the Johnson administration for its “continuing tendency toward managed news and suppression of public information that the people are entitled to have.”

FOIA established that the public had a right to access agency records of the executive branch and federal government departments, subject to nine exemptions, geared for example toward protecting sensitive national security information or trade secrets. Authorities are required to respond to requests within 20 business days.

As David McCraw, lead litigation attorney for FOIA lawsuits brought by the New York Times, recounted in a 2016 Yale Law Journal article, consumer advocate Ralph Nader conducted an early test of the law by sending one hundred students out to make FOIA requests of numerous federal agencies. Nader concluded in a 1970 article, “Freedom from Information: The Act and the Agencies,” that “government officials at all levels in many of these agencies have systematically and routinely violated both the purpose and specific provisions of the law.”

Given FOIA’s perceived deficiencies, including the ways the bureaucracy thwarted information seekers, such as through delaying responses, and liberally interpreting and applying exemptions—issues Nader had flagged from the jump—the law would be amended several times, most recently in 2016.

Yet decades after writing his critical article, Nader would do something of an about-face. While acknowledging federal agencies’ continued reluctance to openly share information, he lauded the statute, noting that “compared to the pre-FOIA laws, our ability to find out what the government is or is not doing is almost like night and day.”

McCraw concurs that FOIA “shift[ed] the transparency paradigm.” But he also contends—pointing to Nader’s early misgivings about agencies dragging their feet over requests, and manipulating exemptions—that: “[F]ive decades of litigation, which agencies have regularly won, have legitimized these practices as proper and legal, and constricted FOIA’s scope and efficacy.” “Legislative fixes,” wrote McGraw, “have fixed very little.”

You’d be hard-pressed to find an issue on which journalists and activists of all stripes are more united than in their frustration with the federal government’s treatment of FOIA requests.

It shows in the criticism even otherwise favorable sources have heaped on every president in recent memory.

A Columbia Journalism Review Trump administration retrospective noted that FOIA rejections and redactions increased under Trump, while delays grew at most federal agencies and the number of FOIA lawsuits skyrocketed.

“Just about by any measure, things have gone from bad to worse,” says Adam Marshall, who works on FOIA lawsuits for the Reporters Committee for Freedom of the Press.

Marshall said “things have gone from bad to worse” in part because as the article detailed: “The Obama administration … set records for FOIA non-compliance and was caught at one point … contradicting its public posture [in favor of transparency] by lobbying against FOIA reform behind closed doors.”

Despite the traditional media’s largely sympathetic treatment of the Obama administration, establishment journalist organizations criticized the White House directly over its perceived lack of transparency.

The George W. Bush administration elicited similar criticisms, not only from the likes of the American Civil Liberties Union, but also from conservative Judicial Watch, which characterized the administration’s FOIA posture as “arrogance throughout—that the government is not to be questioned.”

This past January, an open government coalition chastised the Biden administration for not issuing FOIA guidance to agencies during its first year, ignoring an April 2020 request that it do so, and past precedent.

As the coalition wrote in a letter to the DOJ—which typically issues such guidance and monitors FOIA compliance: “Noncompliance is at a decade-long high even while requesters are waiting longer than ever to initiate litigation. We once again appeal to you to act.”

In March, Garland did so, moving to “direct the heads of all executive branch departments and agencies to apply a presumption of openness in administering the FOIA and make clear that the Justice Department will not defend nondisclosure decisions that fail to do so.”

Reed Rubinstein, senior counselor for America First Legal, who has helped RealClearInvestigations draft several FOIA requests, does not believe the Biden administration is practicing what it preaches, telling RCI it has taken FOIA obstruction “to a different level,” and arguing that its email-related requests “suggest that the White House has imposed a new requirement to slow down or frustrate requesters.”

Those RCI interviewed suggest that administration guidance like Garland’s is typically perfunctory.

Michael Bekesha, a senior attorney at Judicial Watch, says that while some administrations distinguish themselves by saying “they’re going to be more proactive towards disclosure, like the Obama administration … That doesn’t mean they are. It just means they talk the talk. But the agencies very rarely walk the walk.”

Seth Moulton, senior policy analyst at the Project on Government Oversight, notes that “through almost every administration, what changes is in the margins … You get an administration that comes in that says, ‘We want you to … put more resources to it, release more information here or there,’ [generate] a little bit of improvement maybe …”

The numbers seem to tell this story.

The government’s backlog of FOIA requests swelled by a staggering 97 percent from 2012 to 2020—that is, across vastly different administrations.

The backlog has grown against a backdrop of ever-increasing requests, rising to 838,688 in 2021 alone—continuing a trend only interrupted by the 2020 pandemic year whereby requests increased 32 percent from 2012 to 2019.

In 2021 the GAO reported that several agencies were out of compliance with proactive disclosure requirements. 25 reported zero such disclosures in 2018 and 2019.

Cohan is adamant: “I think FOIA is a joke … to pretend that we have anything like a Freedom of Information Act that actually works and does anything for a working journalist is also a joke.”