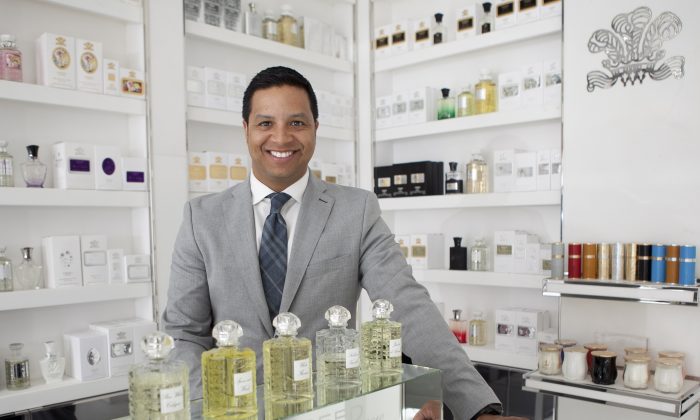 The Road to Finding Your Scent

Olivier Creed’s first creation when he became master perfumer at the age of 32, was Zeste Mandarine Pamplemousse.

He gave the scent as a gift to U.S. troops at Walter Reed Army Medical Center in Washington, D.C. when they came home from the wars in Iraq and Afghanistan.

With top notes of bergamot, mandarin, and grapefruit, it was a gesture to herald happiness and sunshine.

Creed had just succeeded his father in the iconic perfume company, which was founded in 1760 and has served more than 10 royal houses.

The Catharsis of Scent

Undoubtedly the effect of scent is powerful and not always easy to describe. It may be a the link to a time or place that has etched itself in the unconscious until the moment when you catch a whiff of a certain smell that takes you back in time. There is catharsis in finding and wearing a scent.

So, the process of choosing your signature perfume is not without its perils. A good perfume connoisseur should be able to help you navigate your way to the one scent that blends with your skin as well as personality and becomes part of you.

“The job of a fragrance is that it speaks for you, it tells people a little bit about yourself without you saying a single word, and it could be intriguing, it could be power, or attraction,” explains Creed store director Luis Cavallo. I add that it communicates subliminally, but much more powerfully, than words.

Cavallo explains that our noses are only able to cope with three scents, after which the going gets tough and confusing. If there was one place where you wish you had a few noses, it’s the Creed store where, among other perfumes, you can sample the scents created for history’s VIP’s as they requested them.

A Walk Through Memory and History

“When you come into Creed it’s like a journey, coming here is taking a walk through history, stopping, recognising where you want to be, finding who you are, and that’s how we match your scent, and hopefully we can find a signature scent for you,” Cavallo said. “Coming here is finding yourself through scent.”

Having tried Jardin D’Amalfi (or Amalfi Garden), evoking a lush grove of flowers on Italy’s glittering Amalfi coast, and liking it, Cavallo takes me on a floral journey with Fleur de The’ Rose Bulgare, commissioned by Theodore Roosevelt for his second wife. Undoubtedly rosy, the bottled scent is far more scintillating than when I try it on. The reaction with my skin reminds me of an old fashioned record player stuck on a high note—the rose is there, but it’s screaming at me.

The Land of Exotic Ingredients

I soldier to more exotic lands with Sublime Vanille. Despite the popularity of Vanilla, I express visible hesitation to wearing anything vanilla, since the link for me leads straight to ‘death by cupcake’.

“Vanilla got a bad rep over the years but it is a beautiful ingredient and you know what? Men love vanilla on women, it’s a fact,” Cavallo said. I register my disbelief and protest.

“And lots of men wear vanilla. If you smell like a cup cake—you’re choosing the wrong scent,” Cavallo added. Apparently lot of perfumers use vanilla molecules to extend the shelf life of a scent on the skin, because it holds on and is the last note.

“Vanilla is like a nuclear bomb, when you add one drop in your formula, it consumes everything, but then, your fragrance is going to smell like everybody else,” Cavallo said. He informs me that Sublime Vanille is the very first fragrance in the Royal Exclusives range that Olivier Creed created because he wanted to bring back the luxury of using vanilla. So it’s not vanilla per se, but “a very controlled, sheer veil of vanilla.”

I wasn’t brave enough to spray it on. I recognised the ‘sheerness’ of the vanilla but somehow the nuclear bomb stayed with me more, though it looked like a distant, less lethal explosion in the distance. I chose to be spectator with this one.

Moving on to the citrus family, it turns out that fall and winter are best for wearing citrus—as opposed to warmer months when the citrus molecule oxidises faster due to the heat. This is good news for me as anything remotely grapefruit has my full attention.

The best way of applying perfume comes into question. According to Cavallo, there is no right or wrong but a learned habit. But he advises that women should always spray a little fragrance on the hair as it will last longer.

One point to consider though is that spraying it on your wrist then rubbing, may not be a great idea as the heat generated from rubbing speeds up the oxidation process of the top notes, thus shortening the life of the fragrance on the skin.

Armed with this knowledge I was determined to finally commit to a scent of my own, but though Jardin D’Amalfi seemed to fit, I wasn’t fully convinced. Then, three gentlemen walked into the Madison Avenue store and started a rather animated discussion of a particular perfume. And then it happened, I caught a whiff of the plume of scent in the air and I knew it was the one for me.

“This is the one,” I said to Luis, like a child in a candy shop.

I decided to spray some on my wrist and let it ‘become me’. The result was fascinating. As I walked downtown, I could swear I had someone walking rather too close with their nose in the air trying to catch the mysterious scent exuding from me.

Wading through the crowds of 5th Avenue, I took courage every time I smelled it. There was a pleasant savory element, like freshly baked bread or slightly burned toast—rich and mysterious. Oh, and totally fruity.

In terms of personality it’s Alan Alda, meets Carmen Miranda, with a dash of Magellan.