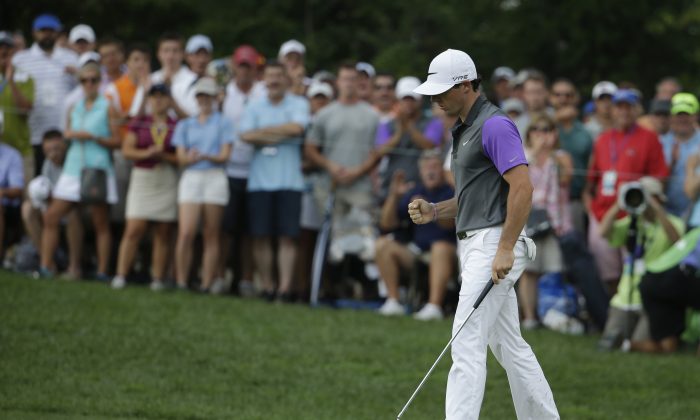 Rory McIlroy, of Northern Ireland, celebrates his eagle on the 10th hole during the final round of the PGA Championship golf tournament at Valhalla Golf Club on Sunday, Aug. 10, 2014, in Louisville, Ky. (AP Photo/Jeff Roberson)
Golf

The Road Ahead for Rory

Greatness and Challenges Abound
By M. James Ward, Epoch Times Contributor
Share
FacebookFlipboardTweetRedditEmail
MOREPRINTFONT BFONT S
LOUISVILLE—After winning in grand style his 4th major golf tournament and second PGA Championship in three years, Rory McIlroy has served notice that when his game is in top form he is the man to beat — and likely will be for a number of years given his young age of 25. Notwithstanding the likes of an injured and shell-shocked Tiger Woods who is off licking his wounds now.
A bit of perspective is needed to assess where the 25-year-old Northern Irishman is now. With his PGA win he becomes the third-youngest to win four major championships — 25 years, 3 months and 6 days — behind Tiger Woods (24 years, 6 months and 24 days) and Jack Nicklaus — 25 years, 2 months and 22 days.
McIlroy is the 5th golfer to win The Open Championship and PGA Championship in the same calendar year joining the likes of Walter Hagen (1924), Nick Price (1994), Tiger Woods (2000 and 2006), and Padraig Harrington (2008). Keep in mind that Woods has turned the trick twice — so in reality McIlroy’s double major triumphs to conclude the 2014 major season makes him the sixth golfer to do it. The world’s number one player is the first to win two majors in one calendar year since Harrington did so in 2008.
He is the fifth international player to win more than one PGA Championship –the last coming from Vijay Singh in 1998 and 2004. More importantly, he is the sixth player to win the PGA Championship shooting all four rounds in the 60’s. His scoring has been without peer as well — 32-under-par in his last 12 PGA Championship rounds and 48-under-par in his last 12 competitive rounds of 2014.
So what happens now?
McIlroy will be the lead member for Team Europe as it seeks to win its 8th Ryder Cup Match in 10 attempts when they meet at Gleneagles in Scotland in roughly six weeks time against a shaky American squad beset by various injuries and question marks  — most notably — whether Woods will play in the event.
Rory is golf’s story — he is what former baseball star Reggie Jackson said of himself — the stir that makes the drink. No question the bulls-eye is on his back but McIlroy’s play in the final round at the PGA was top tier pressure executed shotmaking. In his past three major wins the outcomes were foregone conclusion — this one was anything but. McIlroy played haphazardly over the first six holes — going two over and eventually trailing by as many as three shots — then simply turned things around by going five-under-par from the 7th with no blemishes on his card. His reaching the par-5 10th in two blows and dropping the seven-foot putt for eagle was the springboard that brought him quickly back into the fray for the final series of holes.
Once before Rory had climbed to the top of the world rankings but then went through a series of several distractions — some personal and some equipment related — that caused him to slide back in the shadows. Now the only shadow is the one he is casting on all of his competitors. Has Rory learned from those situations. It’s likely he has and his competitive fire is now more focused than ever before. And there’s no question — those competitors know full well that nothing but their supreme best golf has a remote chance in succeeding. The same feeling that competitors of Woods faced during his early ascension days.
The Masters is eight months away — will Rory claim the only major title that has eluded him thus far and join the five other members who make-up the most exclusive club in golf — career Grand Slam winners? Hard to deny the obvious. Augusta can’t come soon enough.
Post PGA Wrap-up
Rory McIlory’s one-shot victory over Phil Mickelson in the PGA Championship on Sunday produced the highest overnight ratings in five years, according to CBS Sports.

The household rating was 6.0 with a 13 share, up 36 percent from a year ago when Jason Dufner beat Jim Furyk at Oak Hill, said CBS, meaning that more than 6 million people watched on Sunday. That was the highest rating since a 7.5 and 17 share in 2009, when Y.E. Yang rallied from two shots behind to beat Tiger Woods at Hazeltine.