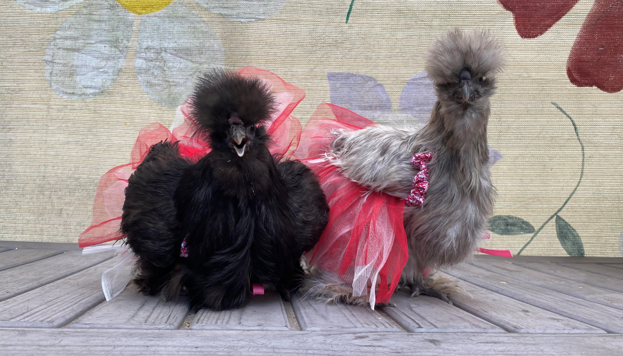 Silkies are a popular ornamental breed of chicken. Their small size, adorable features, and gentle temperament make them a favorite choice for children. (Patricia Tolson/The Epoch Times)
US Features

The Rise of the ‘Chicken Tenders’: More and More People Keeping Backyard Flocks

'The chickens are the only sanity I have'
By Patricia Tolson

In the wake of the outbreak of COVID-19 in 2020, when quarantines and lockdowns forced people to stay home and cope with food shortages, backyard chickens gained widespread popularity.

Now in 2022, supply chain issues are being exacerbated by the destruction of an alarming number of food processing plants as well as the latest strain of avian flu, which has led to more than 35 million birds in the United States being euthanized.

As the move from grocery store dependency toward self-sufficiency is again on the rise, so too are the number of people choosing to raise their own chickens, affectionally known in some circles as “chicken tenders.”

“People who once never considered raising chickens are now looking at those $5 per dozen eggs in the grocery store and thinking, ‘maybe it’s time,'” said Laurie Neverman, founder of Common Sense Home (formerly Common Sense Homesteading), in an interview with The Epoch Times.

In fact, Neverman said the interest in self-sufficiency isn’t just growing in rural communities. It’s gaining popularity everywhere, with people of all backgrounds.

While headlines about bird flu cases are stirring some concern, Neverman said that danger has more to do with factory farm chickens than those raised in a backyard setting. A home environment is cleaner, and “backyard birds aren’t stressed the way factory farm birds are,” Neverman said.

“People love their birds when they raise a small laying flock. They are treated more like pets,” she said. “They are happier and healthier, so it isn’t a serious concern.”

Neverman herself raises chickens. One of them, a golden laced Wyandotte named Miss Mimi, recently became “broody,” meaning she refuses to lay more eggs and prefers instead to hatch fertilized eggs and raise her own brood of chickens. But Neverman doesn’t have roosters, and therefore, no fertile eggs.

“Since she was sitting, we placed some duck eggs under her,” she said. “She hatched three out of four eggs. Then she stayed with the ducklings and raised them until they were teenagers.”

Food prices and empty grocery store shelves aren’t the only factors that lead people to have their own chicken flocks. For many chicken tenders, their birds provide companionship and emotional support.

Kimberley Johns of Antioch, Florida, “became a chicken tender” when she was a little girl. Her mom had taken her to a local farm supply store. She saw the baby chicks and fell in love, so her mom bought some. Today, Johns lives in the country and cares for her elderly mother. Johns suffers from chronic migraines and she said her chickens are the only thing that helps her cope.

“I tried to stay strong, but there were times I just couldn’t stay strong anymore,” Johns told The Epoch Times.

She said she would go out daily to sit with her birds, who would peck at any pattern on her clothes they didn’t think belonged there.

“They also loved pecking gently at my freckles,” she said. “It gave me so much happiness in the middle of so much pain to just lay my head on my knees and let these birds peck around on me and give me the attention that I longed for.”

To keep her “feathered babies” happy and healthy, Johns plants things “that are not just decorative but also edible.” For summer treats, she freezes corn and peas in ice cube trays. Her frizzle rooster, Leroy, is particularly fond of yogurt.

“It is hilarious because he always gets it all over his wattles,” she laughed. “I am so grateful and thankful for these precious little cluckers. They’ve brought me smiles and happiness when nothing else could. ”

John Snyder of Binghamton, New York, said he lives in “a typical neighborhood.” What isn’t typical is what he’s created there. Tiered gardens frame a staircase that leads to a beautiful chicken coop that Snyder built himself during the COVID-19 quarantine.

“I needed a healthy distraction,” Snyder told The Epoch Times. A particularly difficult breakup had left him depressed and lonely, so he thought of chickens. “I have a pretty decent sized garden,” he explained, but his plants didn’t provide much company.

“I love the idea of homesteading,” Snyder explained. “I like self-sufficiency and I always wanted to raise chickens.”

Snyder has three buff Orpingtons and one black Australorp, and he spoke of the joy of becoming an “egg daddy” for the very first time. Then he laughed. “Now I have dozens of eggs in the fridge and I’m trying to get rid of them!”

Joe Heinz of Hernando County, Florida, was introduced to chickens when he went to Germany as a 6-year-old and stayed at his grandmother’s house.

“She said I could go to the chicken coop and get the eggs,” Heinz reminisced for The Epoch Times. “When I came back, she pulled one of the eggs out of the basket and threw it on the floor near my feet. I jumped out of the way. But it was one of those fake ones,” he said, referring to replica eggs used to teach young hens where to lay their real eggs.

“My grandmother wasn’t much for laughter,” Heinz recalled, “but she let out a belly rolling laugh I will never, ever forget.”

When his grandmother passed away, Heinz inherited some of the fake eggs and displayed them on a shelf in his home to remember her. When he found out Hernando County, Florida, was allowing people to have chickens, Heinz said he had to get some. He built his own coop and got an assortment of chickens. He has a black Australorp and a lavender Orpington. He also has an Easter egger that lays green eggs and a cuckoo Maran that lays deep chocolate-brown eggs.

“That one was an accident,” Heinz laughed, referring to the cuckoo Maran. “It was in wrong the batch when I bought my chicks. But it was a happy accident.”

All these years later, to teach his own chickens where they’re supposed to lay their eggs, Heinz places his grandmother’s fake eggs in his nesting boxes.

For Aimee Ward of Frostproof, Florida, chickens provide a calm place in her often stressful world.

Ward said she started raising chickens to help her cope with the stresses of a challenging illness suffered by a close family member.

“The chickens are the only sanity I have,” she told The Epoch Times. “My kids love them, but not as much as I [do]. I’m also growing different herbs and plants to help not only me but also my babies.” Ward and her family live on a lake, and the chickens are free range, she said.

“They helped my banana trees grow better, helped clear it out. We got five new trees this year!”

Sheilah Sepe Maples got her first chickens in 2015. Her fiancé had them, so she wanted some.

“As soon as we brought the first four home I was in love,” Maples told The Epoch Times. Then, four turned into “something like 30.” It’s a phenomenon known among chicken tenders as “chicken math.”

The fiancé didn’t work out and Maples was “stuck in apartment life for the next two years.” Then her mother gave her 2.5 acres of land in DeLeon Springs, Florida. From there, Maples started building a house. “Meanwhile, I got chickens to keep me happy,” she said.

Maples is now married and has two children. “When I’m around the chickens I feel like my stress dissolves, like they suck up the negative energy,” she said.

Most chicken tenders will tell you that it doesn’t stop with chickens.

“Chickens are the gateway drug of farm animals,” Maples warned. “It starts with a chicken and then you end up with other kinds of birds, and now we have three pigs and we’re thinking about getting goats.”

For Elisabeth Rich of Winter Haven, Florida, the introduction to chickens came after she started a homeschool co-op out of her house during the 2020 COVID lockdowns.

“We began training the parents to teach with an open curriculum and started a botany unit for science,” Rich told The Epoch Times in a text message exchange. “Everyone came together to plant a garden in our side yard and another family gave us chickens, all to help educate the children!”

“This year, we are helping four families get started with their own backyard chicken set-up and gifting them adult laying hens, as we raise new baby chicks to refresh our flock,” she wrote. “We are also helping others learn vegetable gardening. If other instabilities occur in our country, our neighbors and friends are taking steps towards stable food sources for their families. This makes us very, very happy to be a part of it!”

Lexi Smith of Melbourne, Florida, got her first chickens in December 2020 after going to a pumpkin carving party where the host had chickens.

“My 2-year-old was obsessed, lifting his shirt and showing the chickens his belly button,” Smith told The Epoch Times. “After that my husband built a coop and we began our chicken journey.” In all, she has seven chickens, one of which is broody and currently sitting on eggs.

Cassidy Bowling of Floral City, Florida, became a chicken tender around the age of 11 when her mom gave her some baby chicks.

“I’ve been in love ever since,” Bowling, now 18 years old, told The Epoch Times. “I would cuddle them and sleep with them and grew to learn that each one has its own personality and actions.” Her favorite chicken breeds are silkies and Australorps.

“I know silkies are common,” Bowling explained. “They’re sweet, cuddly, soft, and dorky. But I feel like Australorps are under appreciated.” While they are a “plain looking breed,” Bowling said that every single one of her Australorps “has such a sweet outgoing personality.”

Unlike silkies, which are a somewhat fragile breed, Australorps are “a lot tougher.”

Meredith Meeks of Polk County, Florida, said she started gardening as a way to eat more naturally, but she told The Epoch Times that “having chickens was just the next step.”

Back in 2017, Meeks said she wanted chickens and a coop. While her husband thought she was “insane,” she said he “lovingly made” a large mobile coop that can be pulled by a tractor to different locations on their 2-acre homestead. They started with three chickens, and they now have five. Her son kept saying he wanted “baby chee-chees,” so she got some for him. He is in charge of feeding them, caring for them, and collecting the eggs.

“It’s a way to teach him responsibility,” Meeks said. “Chickens are really easy to care for, and they produce,” she added. Meeks gets about three eggs a day. “I feed you. You feed me. That works!”

Kathy Beyer lives with her four adopted children in Spring Hill, Florida. While all of them suffered trauma during their time in the foster care system, it was particularly debilitating for her 8-year-old daughter, Elysia, Beyer said.

One weekend, the family stayed at Beyer’s adult daughter’s farm in Georgia, where there were horses, goats, sheep, and chickens.

“Every time Elysia was missing, we found her in the chicken coop,” Beyer told The Epoch Times. “She loved the chickens. She was at peace with them.” Beyer herself had wanted chickens before, but her husband was reluctant. That changed when he saw Elysia with the chickens. They’ve had chickens for about a month now.

“We’re newbies,” Beyer said. “But the change in Elysia’s countenance has been overwhelming.”