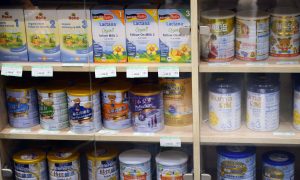 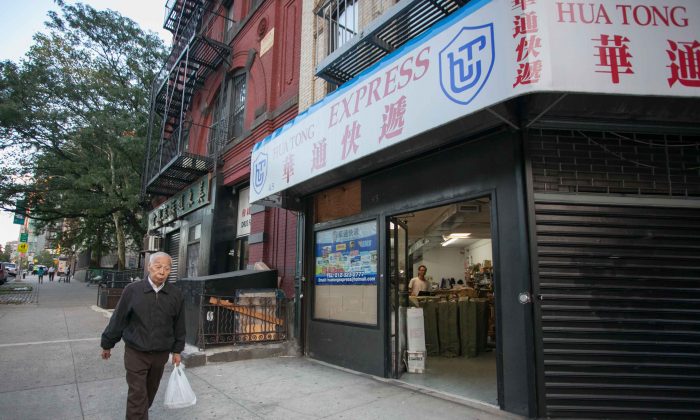 The Rise of Milk Formula Boutiques in NYC

NEW YORK—The throughfare in Flushing, Queens, is replete with the kind of shops one expects to see in overseas Chinese communities—restaurants, groceries, bubble tea cafes, more restaurants, and herbal apothecaries—but the past half-decade has seen a new mainstay amongst the crammed storefronts of Main Street: milk powder and infant formula delivery boutiques.

At JK Express, a delivery boutique that focuses on jewelry and infant formula, a clerk said that the store easily sells more than a hundred cans of infant formula per day. Most of the cans are between one and one-and-a-half pounds, and there are dozens of similar shops within a half-mile radius.

An uninformed visitor to the neighborhood might surmise that Chinese Americans in New York City had collectively caught baby fever, but only a tiny fraction of the cans of Enfamil and Similac sold there will ever be consumed in New York; most will be packed into air cargo, destined for mainland China.

China’s domestic milk and infant formula industry saw an exodus of its customers after a 2008 scandal, where at least six infants died and 13,000 children were hospitalized from drinking milk products containing melamine. It was later found that unscrupulous manufacturers added the hazardous chemical to boost the apparent protein count of their products.

No longer able to trust local products to be safe, Chinese parents are seeking the products elsewhere.

At the same time, Chinese demand for infant formula has been growing at a breakneck pace in the past five years, with sales soaring from $6 billion in 2009 to $14.6 billion in 2013. The market size is expected to reach $41 billion by 2019, according to the research firm Euromonitor International.

In China, only 28 percent of infants are breastfed in their first six months, compared with 46 percent in the United States.

Supermarkets in different countries—among them Germany, England, and the Netherlands—have introduced rationing measures to curb infant formula shortages caused by informal exports to China, either by limiting purchases to one to two cans per customer at a time, or by requiring the ID of the child the formula is meant for.

Due to its proximity to China, Hong Kong has had to adopt more severe restrictions to control the outflow of milk products to Chinese consumers. Since March 1, 2013, people leaving Hong Kong could only carry with them 1.8 kilograms, or two cans, of powdered formula, with offenders facing a maximum $64,500 fine and a two-year prison sentence.

Just hours after the limits came into effect, Hong Kong custom officials made 45 arrests, with 115 cans of milk powder being seized, according to a South China Morning Post report on March 4, 2013. More recently, 64 smugglers were arrested in January, with nearly 900 pounds of milk powder exports seized.

In 2013, the dairy price index averaged a record high 243, according to the UN’s Food and Agriculture Organization. Countries like Argentina and India restrict exports with quotas and export price floors to keep milk affordable for domestic markets, said Alan Levitt, a member of the U.S. Dairy Export Council, but the United States—the top dairy producer of milk and milk products in the world—has no such tradition.

“We tend to be more of a free market player, and tend not to put those sorts of restrictions on commodities,” Levitt said, adding that if the state were to tighten dairy exports it would be a shocking occurrence. “It would be unprecedented, I can’t even conceive of that happening, it’s just not how we do business in the United States.”

The abundant supply of dairy, lack of regulatory barriers, and the size of the Chinese community in New York City all point to Flushing as a prime location for a milk formula pipeline to China.

With low barriers to entry and identical merchandise, the formula delivery market in Flushing resembles a textbook market of perfect competition. The boutiques canvassed by the Epoch Times all offered the same flat rate of $3.75 per pound for delivery to China within 2-3 weeks.

One group of customers are Chinese expats who have their children raised by family in China because they’re too caught up with work, said Ben Zhang, who immigrated to the city from China’s Fujian Province.

“Before the milk scandal in 2008, [families in Fuzhou] simply used local baby formula—now we have to spend so much effort to bring baby formula from the U.S. back to China,” he said.

But many of the customers who walk into these boutiques buy infant formula in bulk, said a clerk at HuaYun Express, because they’re not purchasing it for relatives back home, but for wholesalers who operate online vendors on e-commerce sites like TaoBao, the Chinese counterpart to eBay.

On TaoBao, the top sellers are dominated by official accounts from infant formula brands. Netherland’s Nutrica has sold over half a million 2-pound cans of its Karicare for Toddler formula. But the ecosystem still leaves plenty of room for individual merchants. A vendor called “Zhu-Zhu-Le Baby Room” has sold 3,700 cans of Aptamil.

At the Flushing stores, the most popular brand is Enfamil, most likely because the U.S. infant formula producer doesn’t operate as an official vendor on TaoBao.

There are a few reasons why Chinese parents prefer the same infant formula delivered from overseas, rather than purchasing it at a retailer. First, buying formula from overseas is cheaper due to the morass of retail and import-export red tape businesses face in China. Second, formula bought from the U.S. is inspected by the Food and Drug Administration, which has a sterling reputation among Chinese consumers. Third, online vendors are numerous, competitive, and transparent—TaoBao uses a customer ratings system similar to Amazon.

The Chinese regime has tried to shore up the position of its domestic milk powder firms repeatedly since the 2008 scandal. In the past two years it has levied antitrust fines on foreign brands, imposed new registration standards for sellers, and the China Dairy Industry Association published a report touting the superior quality of domestic milk powder, but to no avail.

Rejected as specious propaganda by the public, the association’s report was even roundly rebuked by the various state-controlled press outlets in China, according to Hong Kong’s South China Morning Post.

Workers, surrounded by cardboard boxes stacked two stories high, were busily packing everything from shoes and toys to diapers and, of course, infant formula, boxes and boxes of it.

Asked how the business was faring, the warehouse manager cheerfully declined to give details, citing trade secrets, before hurrying to answer another call.