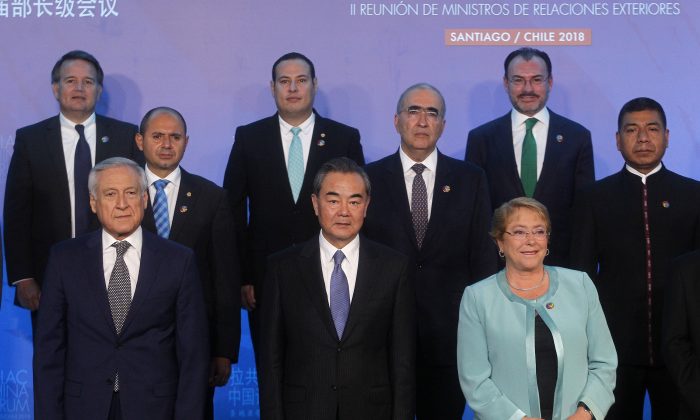 The Rise of Chinese Imperialism in Latin America

China's soft and hard power initiatives are threatening US influence

China’s communist regime is lending and investing heavily throughout Latin America, and not for charity. Slowly but surely, the strategy is eating away at U.S. foreign-policy dominance in the region.

Foreign investment from the People’s Republic of China is never an act of mere capitalist enterprise or altruism. Rather, the totalitarian regime is picking up where totalitarian Cuba left off and is expanding its sphere of influence via the underbelly of vulnerable, poor, and often unsuspecting nations.

The Chinese regime’s ulterior motives are thinly veiled and evident both in the structure and locational choices of such enterprises. The ventures reward ideological, anti-U.S. friends, strengthen geopolitical alliances, and serve as a platform for espionage. The case of Venezuela is illustrative, since that socialist nation is a black hole for foreign investment, yet China continues to roll over many billions in favorable debt and allows interest payments only.

As made clear in a recent report from the Center for a Secure Free Society (SFS), titled “The Dragon and the Condor,” the threat of imperialist influence from China is no longer an academic topic. Rather, it has already arrived and grown ominously for the last decade.

A slate of major infrastructure projects on the horizon—most notably in Chile and Nicaragua—are ready to transition China’s influence from “soft” to “sharp,” as reported by the National Endowment for Democracy. The pressure is becoming more combative and is backed by threats of retribution—the stick rather than the carrot.

In their report, SFS fellows Ricardo Neeb and Fernando Menéndez identify an array of current and future activities, and they fit these into a five-stage, long-term plan with seven objectives for the Chinese regime. The pivotal initial step is the development of intelligence capabilities, and these are growing swiftly in the face of Latin America’s weak cybersecurity systems.

One symptom of the intelligence priority is the devotion of investment to the service sector and infrastructure, where the regime can insert its people, garner know-how, and set up protected avenues for information sharing back to Beijing. A blatant example of an effort to “seize digital networks and gain access to politically and commercially advantageous information” is the proposed underwater fiber-optic cable to connect China and Chile, which makes little economic but plenty of geopolitical sense.

Under the broader goals of challenging U.S. leadership and realigning world geopolitics, the sought-after outcomes include the monitoring of regime opponents, the undermining of Taiwan’s presence, cyberwarfare, identification of commercial opportunities, and corporate espionage. The latter two are particularly important because, in the words of Neeb and Menéndez, “it is often difficult to distinguish between state-controlled companies and PRC government agencies.”

Wards of the State

When business ventures are wards of the state, as tends to be the case with China, they naturally utilize each other’s resources for mutual benefit. On the one hand, the Chinese regime will use ventures as propaganda vehicles; on the other, these ventures will get a leg up from the state’s intelligence on competitors.

In 2012, for example, Canadian journalist Mark Bourrie reported that the Xinhua News Agency (the Chinese Communist Party mouthpiece) used him to monitor regime opponents in Canada. Another smoking gun in the Americas targeted Peru in 2012, when malware of Chinese origin stole tens of thousands of industrial blueprints.

The proposed interoceanic canal in Nicaragua, to compete with the Panama Canal, would take China’s power in the region to a new level. Although the $50 billion project is bogged down in legal fights over environmental and property concerns, if completed it would be right in the backyard of the United States.

Handed over to the communist Sandinistas by then-U.S. President Jimmy Carter in the 1970s, Nicaragua still has the same guerrilla ruler at the helm, Daniel Ortega. He has delivered a no-bid contract to Chinese developer HKND, along with 50 years of authority over maintenance and administration, with the option for renewal. Astute observers have pointed out the likely prospect of an extraterritorial zone governed by China in Central America.

These developments should be a warning not only to the United States but even more so to those nations getting into bed with the Chinese regime. Although the initial bait may be enticing and the Chinese may not be seeking explicit financial gain, the interest cost in terms of autonomy, privacy, and independence will be heavy. You can be sure the communists in Beijing are determined to cash in on their investment, albeit in geopolitical currency, and they won’t be promoting liberal democracy and free markets.

Fergus Hodgson, based in Guatemala City, is executive editor of Antigua Report. Follow him on Twitter @FergHodgson