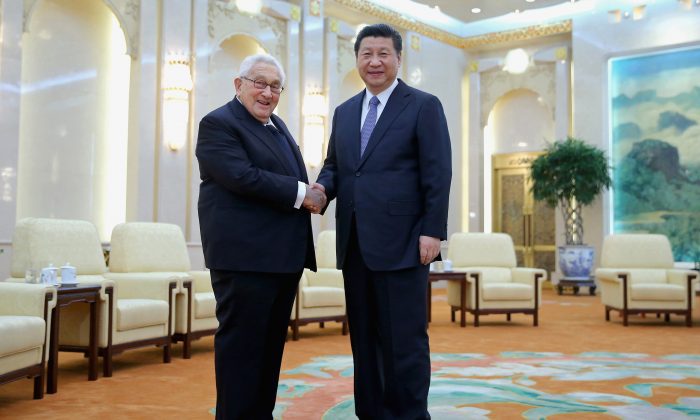 Chinese head of state Xi Jinping shakes hands with former U.S. Secretary of State Henry Kissinger at the Great Hall of the People in Beijing, China, on March 17, 2015. Since helping bring about the opening of China to the United States in 1972, Kissinger has been one of the foremost advocates for engaging China. (Feng Li/Pool/Getty Images)
Thinking About China

The Rise of China: Is Henry Kissinger to Blame?

Henry Kissinger spoke about the Chinese Communist Party (CCP), as well as the threat it poses to Taiwan, in an interview with CNN’s Fareed Zakaria on Nov. 22.

Asked if he expected China to invade Taiwan, the politician, diplomat, and geopolitical consultant said “no”—at least not for now.

What if Kissinger is wrong? Arguably, China is the strongest country in the world—militarily and economically. The CCP acts with a great degree of impunity. With a belligerent dictator in power, the CCP has aspirations of global dominance. This involves capturing Taiwan and permanently dislodging the United States from the geopolitical throne. Both of these ambitions are distinctly possible.

In many ways, Kissinger’s infamous secret meeting, which occurred 50 years ago, opened the door to a dominant, more destructive China. Kissinger’s role in facilitating communist China’s rise should never be forgotten.

In the CNN interview, Kissinger—who served as U.S. secretary of state and national security adviser under the presidential administrations of both Richard Nixon and Gerald Ford—spoke about President Joe Biden’s recent virtual summit with CCP leader Xi Jinping.

Asked if anything had changed since the 1970s, when Kissinger was at his strategic prime, yet again, he said “no.”

“I believe that the ultimate joining of Taiwan and China, the ultimate creation of one China, is the objective of Chinese policy,” said Kissinger, the author of a new book on AI and the future of the human race.

The nonagenarian continued: “As it has been since the creation of the current regime and that it probably would be in any Chinese government since Taiwan has been considered a historic part of China that was taken away by Japan, by force. That was exactly the situation Nixon and I faced when we first began contact with China.”

In 1971, Kissinger made a secret trip to China. Publicly available documents show the many ways in which the former secretary of state and former President Richard Nixon enabled the CCP to grow in power.

The success of Kissinger’s journey into enemy territory, which paved the way for Nixon’s 1972 trip to China, depended on one thing: an admission from the U.S. government that it wasn’t interested in “two Chinas” nor a “one China, one Taiwan solution.”

On July 9, in his historic talk with then-Premier Zhou Enlai, Kissinger gave China what it so desperately wanted, by declaring that the U.S. government was “not advocating a`two Chinas’ solution nor a `one China, one Taiwan’ solution.” Enlai, clearly pleased by what he had just heard, responded with: “The prospect for a solution and the establishment of diplomatic relations between our two countries is hopeful.”

Kissinger had opened the meeting with the now infamous words, “We have come to the People’s Republic of China with an open mind and an open heart.”

Such open minds and hearts opened the door to the China of today, a country that poses an existential threat to both Taiwan and the United States.

In the CNN interview, Kissinger said China has come a long way since he first visited the country. Then, it was “a poor and weak” yet highly “assertive country. Now, “it is a fairly rich, quite strong and still fairly assertive country.” Indeed.

This is not to say that a China forever devastated by poverty would have been a better alternative. Not at all. The Chinese people, it’s important to note, are victims of a tyrannical regime. They deserve a chance at a better life.

Nevertheless, when Kissinger and Nixon essentially agreed to give Taiwan to the CCP, they sent an unambiguous message to Beijing: “Act as you wish. Just let us access your markets. In return, you can access ours.” The CCP agreed, and here we are. It’s not that the trip should never have occurred; it’s that more demands should have been made by the United States, then the most powerful country in the world (by quite some distance).

The year 1971 ushered in a new dawn in Sino-U.S. relations, allowing China to join a number of influential, global economic organizations, including the World Trade Organization (WTO). Since joining the WTO some 20 years ago, the Chinese regime has upped its efforts to influence the world in the most nefarious of ways. From the Belt and Road Initiative (BRI), which saddles countries with unimaginable levels of debt, to the exporting of highly-invasive, digital surveillance technology, China has become a one-stop-shop for destructive goods and services.

Kissinger’s friendly visit resulted in a more prosperous China, but this economic prosperity has given a veneer of legitimacy to autocratic governance. Is Kissinger to blame? Not entirely. But he certainly played his part in creating the China of today, a fact that bears repeating over and over again.