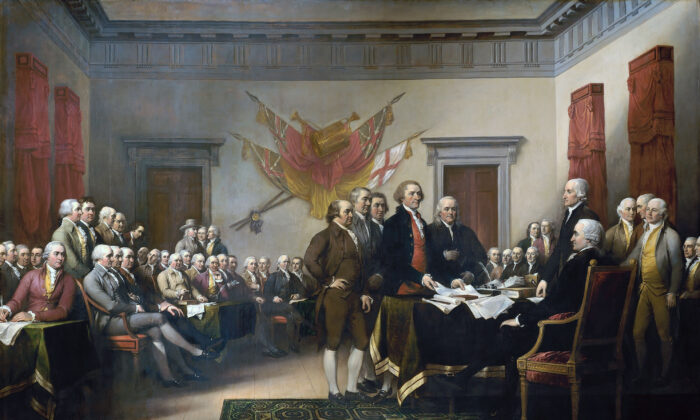 "The Signing of the Declaration of Independence," painted by John Trumbull, 1819. (Public Domain)
Viewpoints

The Revolutionary War and the Origins of Liberty

One of the most common and widespread charges made against our nation’s history is that the American War for Independence was somehow executed for the purpose of protecting, perpetuating, and spreading the institution of slavery.

In fact, the 1619 Project even states that “one of the primary reasons the colonists decided to declare independence from Britain was because they wanted to protect the institution of slavery.” Another writer, parroting the leftist vision of the past, wrote that “patriot leaders weaponized prejudice about African Americans … to unite the American colonists.”

However, just like nearly every other similar claim, once one starts to review the actual historical record surrounding the Revolutionary War, a radically different picture comes into view. One that instead shows that the War for Independence was the spark that ignited the fires of anti-slavery action, not only in America, but for the entire world.

To start with, many of the colonies at the time were in the process of attempting to approve laws limiting, restricting, and reducing slavery at a time when literally no other place in the world was attempting to do so. In fact, these actions were so out of step with the prevailing opinions of the time that the King of England and his royal governors in the colonies would regularly veto these attempts. There was so much budding anti-slavery belief that it appears prominently in the original draft of the Declaration of Independence. Thomas Jefferson, who worked to end the practice despite owning slaves himself, denounced the king.

“He has waged cruel war against human nature itself, violating its most sacred rights of life and liberty in the persons of distant people who never offended him, captivating and carrying them into slavery in another hemisphere. … Determined to keep open a market where MEN should be bought and sold, he has prostituted his negative for suppressing every legislative attempt to prohibit or to restrain this execrable commerce,” Jefferson wrote.

This grievance is significant for many reasons, but you’ll note that Jefferson wrote “MEN” in all capital letters to highlight their humanity and definitively include African slaves as among those “created equal” and “endowed by their Creator with certain unalienable rights.” Even British leaders recognized the validity of Jefferson’s grievance, remarking that the American colonies, “have made laws to prohibit the importation of them [African slaves]; but these laws have always had a negative [veto] put upon them here because of their tendency to hurt our [English] Negro trade.”

Eleven out of the 13 colonies voted for the anti-slavery grievance to be included in the final version but, unfortunately, “the clause too reprobating the enslaving the inhabitants of Africa was struck out, in compliance to South Carolina and Georgia.” However, this means that a supermajority of the American colonies were in favor of the motion—a far cry from the lies taught by the 1619 Project.

Many other patriot leaders voiced their abhorrence of slavery and their desire to see emancipation. John Adams said he “would never oppose” efforts to limit the evil. Benjamin Franklin wrote as early as 1773 that “a disposition to abolish slavery prevails in North America.” At a political convention led by George Washington, they decided to “take this opportunity of declaring our most earnest wishes to see an entire stop to such a wicked, cruel, and unnatural trade,” referring to slavery. Framer of the Constitution George Mason likewise said that opposition to slavery “was one of the great causes of our separation from Great Britain.”

Indeed, people on all sides and from all political persuasions understood the widespread anti-slavery ideals that were propagated by the Revolution. One delegate to the Virginia ratification convention for the Constitution said “it was one cause of the complaints against British tyranny, that this trade was permitted.”

Thomas Hutchinson, the king-appointed royal governor of Massachusetts, said that in the years immediately prior to the Declaration of Independence, “all the Americans who had bought Blacks, had, as far as I knew, relinquished their property in them, and rather agreed to give them wages, or suffered them to go free.”

Upon separating from England, several of the states began the process of ending slavery on their own. In 1777, Vermont’s new constitution included a prohibition of slavery, and in the 1780 constitution of Massachusetts, they laid the groundwork for complete emancipation. Similarly, in 1780, Pennsylvania approved a law for the gradual abolition of slavery, stating that “we conceive that it is our duty, and we rejoice that it is in our power, to extend a portion of that freedom to others. … It is sufficient to know, that all are the work of an Almighty hand.”

I could go on and list dozens of other examples as proof of the central fact that the American Revolution wasn’t, to any extent, intended to secure slavery. Indeed, the evidence points to the fact that, for much of the nation, a leading motivation for independence was the desire to end slavery and the slave trade.

Ultimately, “Slavery had been considerably buffed by the ideas and events of the American Revolution.” Of course, this isn’t to say that all of the Founding Fathers were perfect advocates for freedom, but it does show that, during the origins of the United States, many of our Founders tirelessly worked to increase freedoms for people of every color, every class, and every creed.

If you would like to read more about this, please check out my book “The American Story: The Beginnings” on the WallBuilders store.