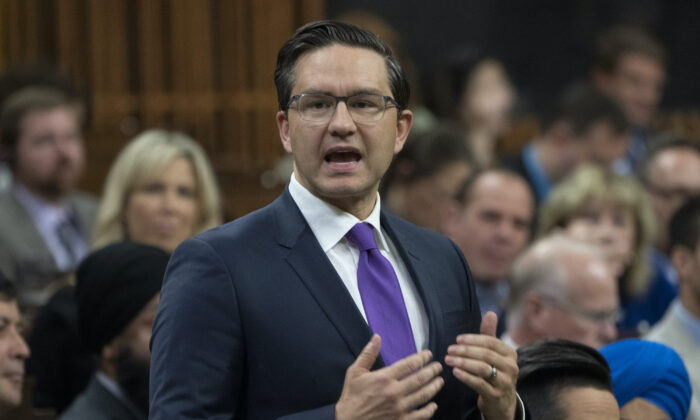 Conservative Party Leader Pierre Poilievre rises during Question Period at the House of Commons in Ottawa on Sept. 22, 2022. (The Canadian Press/Adrian Wyld)
Viewpoints

The attempt by pundits in Canada’s mainstream media to portray Pierre Poilievre as a simplistic, unsophisticated thinker resembles past attacks that the media levied against Ronald Reagan in the United States and Margaret Thatcher in the United Kingdom, both of whom would go on to dwarf their critics and be recognized as transformative, consequential leaders.

If there’s a deficit in seriousness, it isn’t in Poilievre, a Conservative with a platform so revolutionary that its success would convert Canada from being the Western world’s dullard to being among its brightest.

Poilievre has one fundamental, overarching goal—to make Canada the freest nation on Earth—and one sophisticated yet straightforward mechanism for accomplishing it is to “fire the gatekeepers” that block Canadians from achieving their ambitions.

Health care—where Canada’s single-payer system vies with Cuba’s and North Korea’s in barring the private sector—illustrates how Poilievre’s reforms would play out.

Under the current system, according to a recent Angus Reid survey, over 60 percent of Canadians describe the current state of their local health care as “poor” or “very poor,” and 50 percent either don’t have timely access to a family physician or don’t have one at all. The shortage of physicians stems from numerous bureaucratic impediments, not least from the multiple roadblocks gatekeepers install to refuse licences to qualified foreigners.

Poilievre would dismantle the gatekeepers’ barriers by incentivizing provinces to adopt what he calls “the 60-day guarantee”—a requirement that licensing bodies expeditiously decide whether immigrants are qualified to practice medicine in Canada based on “a single proof of ability through testing and other skills exams that everyone—regardless of where they studied—must pass.”

This simple, common-sense approach would do more than ensure that Canada’s many qualified foreign physicians are no longer forced to support themselves in less skilled occupations such as driving taxicabs, and do more than encourage immigration of other foreign physicians to ensure that Canadians are abundantly supplied. Firing the gatekeepers for family doctors—and specialists, nurses, and all others who are qualified yet are now excluded from the health care field—would transform Medicare.

With patients no longer beggars but choosers, physicians and the health-care system as a whole would suddenly be subject to competition, forcing Canada’s antiquated systems to upgrade and improve service while driving down costs. As a 2021 Commonwealth Fund analysis of 11 developed countries found, lack of competition hasn’t served Canada well: Canada spends more on health care as a percent of GDP than Norway, the United Kingdom, the Netherlands, Australia, and New Zealand—countries that allow competition—yet ranks near the bottom, in 10th place, on performance criteria, including access to care and health outcomes.

Poilievre would also stop the gatekeepers that exclude architects, engineers, and other qualified professionals and tradesmen. And gatekeepers who censor what students can debate on campus or what Canadians can say and see online. And gatekeepers who micromanage and meddle in matters that should not be the government’s business.

Poilievre’s is a recipe for small government, achieved not bluntly through across-the-board budget cuts that would inadvertently curtail needed government services—Canada needs more courts to remove the backlogs that delay justice and more highway crews to fix potholes—but surgically through cuts to perverse taxes and a sophisticated freedom agenda that remove middlemen who substitute the desires of Canadians with those of bureaucrats.

Poilievre’s sophistication is also on display in his preferred way of tackling today’s destructively high inflation, the product of the government having printed more money than justified by the size of Canada’s economy. Rather than lowering inflation by raising interest rates to crushing levels—the blunt conventional approach that burdens homeowners and businesses with higher mortgage and financing costs—Poilievre would end wasteful spending and emphasize growing the Canadian economy to a size justifying the excess funds previously printed. “Simply put: Make more goods that cost less by growing paycheques, not debt.”

How to grow the economy and the paycheques that come with it? Remove the gatekeepers that stymie homebuilders in cities, resource developers in our rural areas, and pipeline developers between the two. Under the prohibitively restrictive laws passed in the last decade, environmentalists and social activists have been empowered to obstruct all-new resource developments. By firing the gatekeepers, Poilievre would energize industries across the country, not least those run by the many native communities who are also stymied by activists.

To enable these developments, such as at northern Manitoba’s Port of Churchill, Poilievre would negate the gatekeepers by pre-approving the permits required to export oil to global markets.

“Creating regulatory certainty for investors will allow the port and rail line’s owner, Arctic Gateway Group, to secure the financing needed to restore the rail line and unlock the Port’s potential,” Poilievre explained in the campaign literature that led to his landslide leadership victory. “The Arctic Gateway Group is owned by OneNorth, which is owned by 29 Indigenous and a dozen non-Indigenous communities that own and operate the 627-mile rail line from The Pas to Churchill, as well as the grain terminal at Canada’s only deep-water Arctic port.”

Poilievre’s goal of making Canada the freest country in the world won’t resonate with his critics in the media, but they will with many in the public at large, given the lockdowns and vaccine mandates that so severely limited freedom, and given Canada’s truckers, who came to symbolize freedom around the world. Poilievre’s approach to achieving his goal—his identification of gatekeepers as a general evil to be vanquished wherever feasible—will resonate with many, many more.

“Fire the gatekeepers” stands to represent, like the truckers, a revolutionary cry heard around the world.