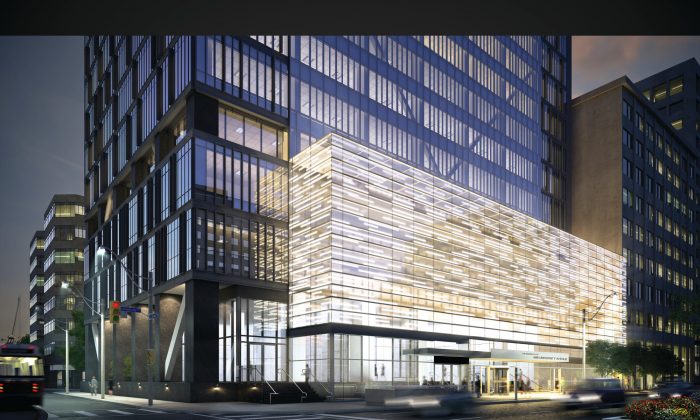 Artist's rendering of The Residences of 488 University Avenue, a 55-storey mixed-use project at the northwest corner of University Ave. and Dundas St. West in Toronto. (Amexon Development Corporation)
Canadian Content

The success of The Residences of 488 University Avenue by Amexon Development Corporation has exceeded the expectations of Jason Shiff, executive sales manager for the 55-storey mixed-use project at the northwest corner of University Ave. and Dundas St. West.

What explains the project’s appeal? Two things, according to Shiff: 488 University boasts a downtown location that’s second to none, perfectly positioned along Toronto’s grand ceremonial avenue, close to the entertainment and financial districts overlooking Queen’s Park, and connect-ed to a subway station. “We’re in the sweet spot of the city.”

Plus the building will offer an array of top-flight amenities, including two saltwater pools and a high-end restaurant in the podium. “The amenities are one of our big selling features here,” Shiff says.

The mixed-use development will have a glassy shimmer that was inspired by the city’s luxury hotel-condo buildings, like the Ritz-Carlton, Four Seasons and Shangri-La.

488 University’s podium will include a 50-foot high atrium, as well as a five-star restaurant and high-end shops and services. And the building will offer direct access to St. Patrick subway sta-tion and the Yonge-University-Spadina line.

“We wanted to do something that would really add to the infrastructure of this location,” ex-plains Shiff. “We wanted to create a fusion of uses, because we know a lot of people these days want to work and live close by—everything has changed. So we think having a residential and retail component will add quite a bit to this location.”

488 University residents will access the building via a porte-cochere entrance to be located on Simcoe Street, with a marble archway, valet parking and 24-hour doorman.

The residential lobby will have an express elevator that delivers residents to a sky lobby on the 18th floor. Floors 18 and 19 are where the Sky Club will be found, with 30,000 square feet of lifestyle amenities that Shiff says could rival those of a five-star resort. This includes SkyBar, a private residents’ lounge, as well an outdoor terrace with firepits, and indoor and outdoor saltwater pools.

There will also be a fitness centre, yoga/Pilates studio, hot tub, screening room and billiards room. The Sky Club will offer great views of the downtown skyline and the lake beyond, Shiff points out.

488 University will be a green project, with suites individually metered for electrical and water consumption, double-pane low-emission windows, and individually controlled and programma-ble heating and cooling systems, plus Energy Star rated appliances. The building itself will have LED light fixtures, motion sensors in corridors and common areas, and electric car charging sta-tions.

The suites, designed by II BY IV Design, will have nine-foot ceilings, floor-to-ceiling windows and herringbone-patterned flooring. Kitchens come with stone countertops and Liebherr and AEG integrated appliances.

Suites will be equipped with automation systems that enable residents to control temperature, lighting, music, television and other multimedia items in their home using a built-in touchscreen panel or mobile device.

“We want people to know that luxe is standard here,” says Shiff, adding that the residences will have walk-in closets and custom cabinetry, as well.

If early sales success is any indication, The Residences of 488 University Avenue—with its eye-catching design and abundance of amenities—could be on its way to earning armfuls of acco-lades all its own. “We wanted to do something Toronto hasn’t done before,” Shiff says.