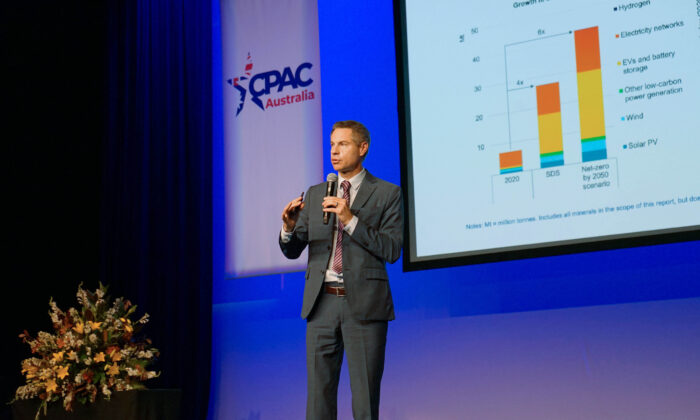 A California-based leading eco-modernist has disputed the widespread claim that renewables are a cheap and clean energy source, arguing that it’s the opposite.

Michael Shellenberger, founder of Environmental Progress, said one of the “most misleading ways that renewable salespeople sell their technology” is they claim the electricity produced by wind and solar is cheaper.

However, the paradox about renewable energy is when deployed at scale, they actually make electricity production more expensive, Shellenberger told CPAC Australia in Sydney on Oct. 1.

“There are basically two reasons,” he said, “It requires more machines, more backup power generators, more transmission systems, and more people to manage the chaos of an electrical grid with a large amount of unreliable weather-dependent energy.”

Shellenberger pointed to a prediction by German economist Leon Hirth that the economic value of wind and solar declines significantly as they take up a larger proportion of the electricity grid.

He said the ideal situation was for the electricity supply to keep up with demand at “all times.”

“Every time you take electricity off the grid and put it back on, you’re paying energy penalties, which increase the cost of that energy somewhere between 20 to 40 percent.”

Shellenberger said this was the case whether it was using electricity to pump water uphill to operate hydroelectric dams or siphoning excess electricity supply into lithium batteries. He noted that it would cost the United States three-quarters of a trillion dollars to create enough storage to back up the entire country’s electricity grid for just four hours.

“We don’t need to backup the grid for four hours, we need to back it up if you’re relying on solar and wind for weeks or months because there are periods of time where there’s no sunlight, no wind, including often at night,” he said.

What About the Waste?

The comments from the environmentalist come as Western countries ramp up their efforts to decarbonise to move towards net zero by 2050, with renewables believed to be the solution as they produce neither greenhouse gases nor polluting emissions.

But Shellenberger, author of “Apocalypse Never: Why Environmental Alarmism Hurts Us All” and “San Fransicko: Why Progressives Ruin Cities,” argued that renewables were more environmentally damaging than fossil fuels and nuclear energy.

Renewables produce 300 times more waste than nuclear plants do, while every solar panel removed from a rooftop was categorised as hazardous waste, the environmentalist noted.

“The problem is that renewables actually degrade the natural environment,” he said.

Shellenberger also said the push for more renewable power sources like wind and solar would result in Western countries moving “in the opposite direction towards a ‘higher material intensity’ society than we have under fossil fuels and nuclear.”

According to a report from the International Energy Agency, natural gas and coal only require a small fraction of mining to support their operations compared to what is needed for offshore wind and solar.

“We use about 10 percent of the materials in the world today for energy production, if we move towards 100 percent renewables that would rise to between 40 and 50 percent, and that’s going to be inflationary.”

He further said that “as a result of the war on natural gas, and this obsession with renewables, the world’s actually going to burn more coal in 2022 than it ever has before.”