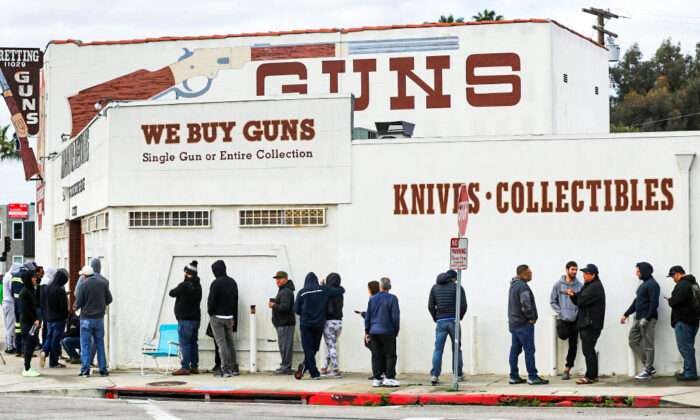 It’s typical of the biased coverage of gun rights that the Los Angeles Times’ article on the Remington gun case in Connecticut got its implications wrong. On Tuesday, the families of those killed in the 2012 Sandy Hook massacre at a Connecticut school reached a $73 million settlement with Remington, the manufacturer of the gun used in the killings.

But the article did not note how crime actually has gone down sharply the past three decades as gun purchases nationally have soared. Homicides have dropped almost in half, from 9.71 per 100,000 population in 1991, to 4.96 in 2018. During this time conceal-carry laws, which let law-abiding citizens carry guns on their persons, have proliferated and now are on the books in most states.

This has been detailed by John Lott and other gun scholars, as in his book, “More Guns, Less Crime.” The fact is criminals most fear a well-armed citizenry. Disarming law-abiding people only emboldens armed crooks.

The Remington case will encourage similar lawsuits, raising the cost of guns. That means only the wealthy will be able either to afford guns or to live in gated communities protected by armed guards. The poor and the middle class could end up being priced out of defending themselves.

Indeed, the Times itself wrote, “Los Angeles City Atty. Mike Feuer, who has filed several lawsuits along with other government litigators seeking to hold the gun industry accountable, agreed that the settlement ‘may provide a road map for other victims of gun violence seeking accountability.’

“‘The success in this lawsuit points the way forward and will be relevant in California,’ Feuer said. ‘It shows a way to attack the marketing practices of gun manufacturers.’”

Remington’s marketing in question involved their rifle using a 30-round magazine, or “clip,” such as that used by the Sandy Hook killer. But this shows ignorance all around—by Feuer, the journalists and the Times’ publisher. Although it didn’t happen in that case, anyone familiar with rifles knows bigger magazines, although looking more potent in ads, are more prone to jam.

In the 2012 killings at a theater in Aurora, Colo., the 100-capacity magazine used in a similar rifle jammed, ending the rampage. That’s because bigger magazines require a larger spring to push the bullets into the weapon, and bigger springs are more likely to malfunction.

Another aspect is how guns are viewed by critics as mere instruments for massacres. Actually, the AR-15 and similar weapons primarily are intended for self-defense by families. Estimates are at least 20 million of these rifles are owned legally in America, with incidents like Sandy Hook exceedingly rare.

How is owning an AR-15 different from owning a car or truck? Just last November, a maniac in Waukesha, Wisc., drove a Ford Escape SUV into a Christmas crowd, killing six people and injuring 62. He has been charged with homicide. Should Ford be held accountable for those actions?

In 2020 in America, 38,680 people were killed in auto accidents, compared to 19,384 homicides by guns. Wouldn’t it make more sense to ban cars than guns—also reducing greenhouse gas emissions substantially?

This assault on gun rights is part of a pattern. Earlier this month, California joined 12 other states and the Mexican government in accusing “a group of American gun manufacturers of facilitating the trafficking of weapons to criminals in Mexico, fueling gun violence,” reported CNN.

Said California Attorney General Rob Bonta in a Feb. 1 statement, “In today’s brief, the attorneys general oppose the defendants’ motion to dismiss the suit and argue that the federal Protection of Lawful Commerce in Arms Act (PLCAA) does not shield the companies from accountability.

“‘Gun manufacturers and sellers seem to believe PLCAA gives them a free pass to make and distribute weapons they know are being trafficked and used to terrorize communities in Mexico,’ said Attorney General Bonta. ‘In most industries, companies are well-aware that they can be held accountable if their product is defective or harmful to consumers—firearms should be no different.’”

Actually, the U.S. Constitution gives the federal government, not the states, the authority to deal with foreign governments. It’s strange that these state AGs think they can form their own State Departments.

And Bonta simply is wrong in alleging the products are “defective.” As I noted above, the primary purpose of guns is self-protection, which is performed well in the United States, where an estimated 400 legal guns are owned by our citizens.

Mexico’s real problem is the opposite of that alleged: It has some of the most strict gun control laws in the world. Bonta’s statement even affirms this, “In Mexico, legally purchasing a firearm is nearly impossible. The country has one gun store and issues fewer than 50 gun permits per year. Despite this, an estimated 200,000 firearms are trafficked into Mexico from the United States every year.”

The Mexican gangs, of course, ignore those laws. Which means innocent, law-abiding Mexicans are left disarmed against the mayhem now consuming the country. Bonta and the other AGs should be encouraging Mexico to adopt its own Second Amendment “right of the people to keep and bear arms,” not eviscerate our own.