The Recycling Game Is Rigged Against Consumers 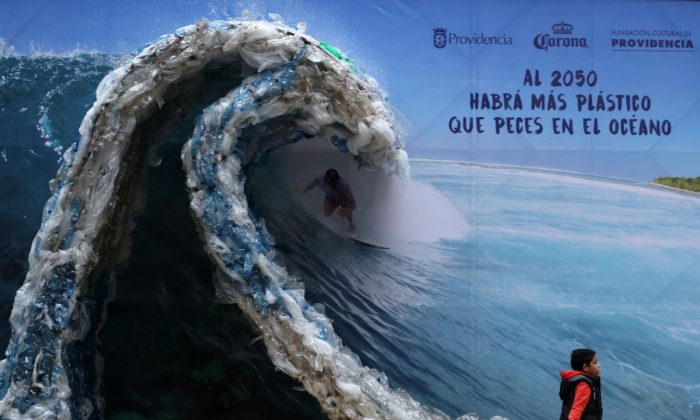 TOPSHOT - A billboard portraiting a man, surfing a wave made out of plastic bags and bottles, to denounce ocean's pollution is pictured in Santiago on the eve of the World Environment Day, on June 4, 2018. (Photo credit should read CLAUDIO REYES/AFP/Getty Images)

Americans were not set up for success in recycling plastics. Even before China stopped accepting plastic refuse from abroad, 91 percent of potentially recyclable plastic in the U.S. ended up in landfills – or worse, in the oceans. Europe does a little better, with only 70 percent getting tossed.

Why such terrible rates? Partly because some changes that were supposed to make recycling simpler ended up making it almost impossible.

University of Georgia engineering professor Jenna Jambeck said that indeed, part of the reason China is now refusing to process American and European plastic is that so many people tossed waste into the wrong bin, resulting in a contaminated mix difficult or impossible to recycle.

In a paper published last week in Science Advances, she and her colleagues calculated that between now and 2030, 111 million metric tons of potentially recyclable plastic will be diverted from Chinese plants into landfills.

Jambeck said that China used to turn a profit by importing the stuff from American and European recycling bins and turning it into useful material. But as other countries attempted to simplify things for consumers with “single stream” recycling—think of one big blue bin for paper, plastic, metal a, d glass—the material reaching China became too contaminated with nonrecyclable items. The instructions to put everything in one bin seemed appealing but made it much easier to do recycling wrong.

Plastic matters because it takes centuries to degrade, and there’s a lot of it. Jambeck has estimated that the world has produced more than 8 billion metric tons since the 1950s. To help grasp this quantity, paleontologist Jan Zalasiewicz has estimated that this is enough to wrap our entire planet in cling wrap. Others have calculated that it would make four mountains the size of Everest.

A study Jambeck led in 2015 calculated that about 8 million metric tons of plastic garbage is added to our already polluted oceans each year, killing seabirds, turtles, marine mammals and other creatures. Some breaks down into particles that infuse the fish and shellfish people eat.

How did things go so wrong? I posed the question to Princeton University historian Edward Tenner, author of the new book “The Efficiency Paradox,” as well as a classic on unintended consequences, “Why Things Bite Back.” He wrote back that single-stream recycling has burdened us with a heavy cognitive load:

This very morning I finally found out how to treat a milk carton with a plastic spout. What about film-protected take-out coffee cups? Toothpaste tubes? Only after your message did I pay any attention to the Wikipedia article on resin codes – and I, like you, am a science and technology writer!

Yes, trash has become complicated, with products that used to come in cans now in combinations of cardboard and plastic. And then there’s the brain-draining complexity of yogurt tubs – one of the items, along with dirty take-out containers, that The New York Times said Americans are recycling incorrectly. I put on my reading glasses and studied a carton of Greek yogurt. I discovered all sorts of mysterious symbols, which may have something to do with the lack of GMOs or gluten.

There were explicit instructions not to put this product in your freezer, which I might have guessed to be the case, but not much help with the container disposal. A tiny, barely perceptible resin code was stamped on the bottom. It was a 5, I think, which means it’s polypropylene and is accepted as recyclable in some communities and not others.

“Making efficient systems work can be surprisingly inefficient for the human mind, at least for mine,” said Tenner. “It’s easy to do the ‘right thing’ only to discover you’ve made it more difficult to protect the environment.” It’s not just a few of us messing up: Remember that 111 million metric tons of plastic headed to Chinese landfills.

Well-intentioned recyclers probably aren’t the worst offenders; one Waste Management executive quoted in The Times said he had seen “everything from Christmas lights to animal carcasses to artillery shells.”

While there ought to be a fine for the carcasses and Christmas lights, for the most part, the answer to contaminated recycling streams is not to keep berating consumers over getting Resin Code 5 wrong, but to commit to advancing clean plastic technology. Even if consumer participation in recycling were 100 percent, we wouldn’t be close to recycling 100 percent of the material, said chemical engineer Megan Robertson, who co-wrote a piece in Science last November on the future of plastics recycling. Much consumer waste is simply not recyclable, often because it combines materials.

Given what scientists already know how to do, the future could bring a greener, more fool-proof system. Right now, she said, she and other scientists are starting to develop ways to recycle mixtures of plastics – a tough job because many plastics repel one another like oil and water. One of the reasons China imported recycling was that it was possible there to hire cheap labor to sort the different plastic types by hand. (Worth noting: Over that same span in which recycling streams have become more contaminated, labor in China has also become scarcer and more expensive.)

Another problem is that nearly all current “recyclable” plastics can’t go back into packaging but get a second life as a handbag or lawn chair before settling into landfills as their final resting place. They’re not really recycled so much as “downcycled.” The other author of the Science paper, Jamie Garcia of IBM Research, has invented a new kind of plastic, which can be recycled back into the same kinds of containers hundreds of times. Adopting such a material would require a new approach at recycling facilities, and in the short term could cost more.

Curing the plastic problem is a lot like fighting cancer. Even if everyone stopped smoking, there would still be cancer. And even if we all figure out whether our municipalities accept yogurt containers, plastic waste will still pollute the environment. Compliance won’t be a cure until innovations from the lab set us up for success.