Editorial: The Reality of China’s Pandemic and the CCP’s Demise 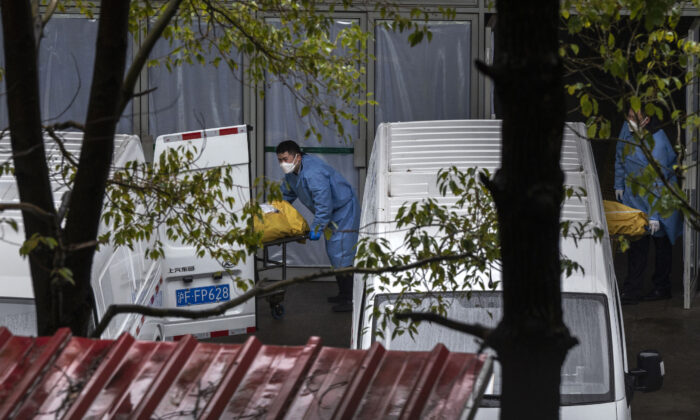 Funeral workers load bodies into vans to be taken for cremation at a busy local funeral home in Shanghai on Jan. 13, 2023. (Kevin Frayer/Getty Images)

The pandemic is spreading like wildfire again across China. Since December, an estimated 900 million people in China have been infected, according to Peking University. The number could reach as high as 80 to 90 percent of the population, according to prominent Chinese infectious disease experts.

Ever since the first wave of the virus in Wuhan in 2019, the Chinese Communist Party (CCP) has done everything in its power to cover up the true extent of the outbreak and its death toll.

In reality, the spread of the virus in China has continued over the past three years, resulting in an immense societal impact and a massive death toll.

Sources on the ground in China have described the severity of the situation to Epoch Times reporters. Residents say it is difficult or impossible to secure a cremation or burial site for their loved ones.

Cremation centers across China have been overloaded and are working nonstop. In many cases, crematoriums have weeks of backlog, and refrigerator units for meat storage are being repurposed to store dead bodies. Cremation centers and funeral homes have sharply increased their spending on items such as body bags and cold storage containers.

For example, Reuters reported on Jan. 20 that in Shantou city, a funeral home made an “emergency purchase” of two additional cremation ovens. In the city of Zigong, a funeral service center ordered nearly 200,000 liters (more than 52,000 gallons) of diesel after being “almost exhausted.” And in Jieshou city, officials said “the funeral hall’s remains refrigerator cannot meet the current unit demand,” leading them to order 10 additional large-scale freezers. A manufacturer of incinerators in Shandong Province says its plant has recently been operating at full capacity and “working overtime 24 hours to meet the urgent procurement needs.”

One way the CCP has kept the death toll artificially low is by forcing family members to sign papers claiming the deaths of their loved ones are unrelated to COVID-19, in exchange for allowing the bodies to go through the system and actually be cremated. Meanwhile, staff members at cremation centers have received strict instructions not to share with the outside world any information on the number of bodies being burned.

The CCP has more than 100 years of experience in lying to deceive the public. Whenever a disaster hits China, no matter how bad, the CCP will turn it around and use it as an opportunity to glorify the Party and its response.

Between 1958 and 1961, at least 40 million people died in the Great Famine caused by the CCP. While starving its people, the regime celebrated its achievements, and the true death toll wasn’t known until decades later.

Recently, the CCP publicly celebrated its self-proclaimed “success” in combating COVID-19 and claimed the death toll was as low as 60,000 people. However, this is statistically nonsensical, as it would suggest that the virus was over 160 times more deadly in the United States than in China.

The regime’s nearly three-year-old “zero-COVID” policy has proven to be a humanitarian catastrophe. In the name of combating the outbreak, the populace has been forced to endure extreme conditions. Hundreds of millions of people have been put in quarantine centers or confined to their homes, leading to prolonged isolation and lack of access to food, basic supplies, and crucial medical care. Many have even been forcibly sealed inside their apartments.

With Beijing’s draconian control over all parts of society, no official number in China can be trusted. Even the total size of China’s population is disputed. Last year, a data breach suggested that the CCP had been manipulating the country’s official birth rate, and a 2020 analysis suggested that the actual population could be 130 million fewer than the official number of 1.4 billion.

Foreign research firms, such as London-based Airfinity, Ltd., are now estimating that 36,000 people will die from COVID-19 per day in China by the end of January.

The real number is likely many times higher.

Citing accounts of crematoriums operating continuously, Sean Lin, a virologist and former lab director at the viral disease branch of the Walter Reed Army Institute of Research, estimated that Chinese funeral homes may have burned 6 million bodies in the past month. And because people in the countryside lack access to cremation services, the actual death toll could be as high as 10 million for the month—a conservative estimate, he said.

The Epoch Times reported in March 2020, just months after the initial outbreak of COVID-19, that the number of cellphone users in China had dropped by 21 million within three months. Cellphones in China are an indispensable part of everyday life, even being used for official identification. Data points such as this one suggest the real death toll over three years could be in the hundreds of millions.

During previous disasters, top CCP officials considered themselves protected by their ill-begotten wealth and power.

However, in recent weeks, information has leaked out about the deaths of many high-ranking CCP officials, including former senior military members, retired officials, academics, and industry experts. These officials, who are typically entitled to privileges, including every medical and life-saving treatment at the Chinese regime’s disposal, are now dying in high numbers.

Notably, the astronomical spike in infections and the massive death toll in China since December haven’t been seen in other parts of the world, despite China opening its borders in early January.

So why is the situation in China disproportionately worse than in the rest of the world?

The ancients believed that plagues punished humankind when its sins became too great.

In Eastern thought, specifically, there’s the concept of karma, which is acquired as a result of committing bad or immoral deeds.

The Chinese Communist Party has, for the past 70 some years, committed numerous sins. Not only did it destroy China’s rich traditions and culture, but it went so far as to destroy those who believed in the divine. Its campaigns have resulted in an estimated 80 million unnatural deaths.

Most recently, the CCP has engaged in a whole-of-society persecution targeting an estimated 100 million practitioners of the spiritual discipline Falun Gong. The persecution was launched in 1999 by then-CCP leader Jiang Zemin, who died in November last year.

The persecution has affected all Chinese people and all aspects of society, with the CCP spending upward of a quarter of its GDP on carrying it out in the early years. Students are indoctrinated with propaganda smearing Falun Gong in school, while university applicants have been forced to sign a statement opposing the practice as a requirement for college entry. The regime has demanded that neighbors, family members, and coworkers report Falun Gong practitioners to authorities, turning members of society against one another.

Practitioners themselves, who believe in cultivating goodness based on the principles of truthfulness, compassion, and forbearance, have been subjected to torture, arbitrary detention in labor camps, and the harvesting of their organs while still alive.

“Pandemics and plagues are part of a divine plan and inevitable in the course of history. When people become immoral they generate karma, become sick, and experience disastrous things,” wrote Mr. Li Hongzhi, the founder of Falun Gong, in an article titled “Stay Rational” at the outset of the pandemic in March 2020.

“But a pandemic like the current Chinese Communist Virus (or “Wuhan Virus”) comes with a purpose behind it, and it has targets. It is here to weed out members of the Party and those who have sided with it,” Mr. Li wrote.

History has shown us previous examples of this. In ancient Rome, the persecution of Christians resulted in four plagues, and the powerful Roman Empire declined and eventually perished. In China’s history, a change of dynasty often occurred when the court became corrupt and social morality had degraded; plagues frequently resulted.

Ultimately, the best cure for this plague is to reject the CCP.

We hope every person can survive this disaster safely and help to usher in a brighter tomorrow.