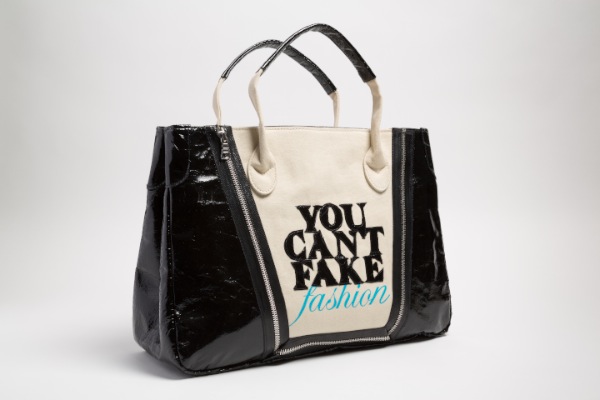 The Reality of a Fake

Unless you have been super vigilant and only bought your clothing and accessories directly from designer boutiques throughout your life, you have more than likely owned a knock off, a copy, an imitation, ‘inspiration’ or, worse case scenario, a counterfeit of a designer creation–a fake.

But what is a fake? And why should you care that much? When it comes to fashion, it’s a matter of ‘out of sight out of mind’ for the majority of consumers who are already bearing the brunt of hard economic times.

The Museum at the Fashion Institute of Technology (FIT) presents Faking It: Originals, Copies, and Counterfeits, an exhibition that explores various levels of authenticity in fashion and aims to throw some light on a topic that has been around ever since the idea of commerce.

The exhibition features approximately 100 clothing and accessory items spanning more than 150 years, from the museum’s permanent collection. It is accompanied by video footage that explains some of the issues surrounding the creation of designer goods versus the manufacturing of fakes and copies.

A Thing of Beauty

“I wanted to show the original next to the counterfeit so that you can tell the difference between the two, but also to show the beauty and the craftsmanship that goes into these designer bags,” said Ariele Elia, assistant curator of costume and textiles at The Museum at FIT.

“There’s so much time and labor that goes into these, and all of the luxury brands are producing these things ethically. Whereas if you look at a counterfeit, where it is produced and how it is produced, it’s really quite horrifying,” she said.

There can be a fine line between an item of clothing or accessory ‘inspired’ by a designer original, but the line is definitely there.

The first garments in the exhibition are two ensembles. One is the real McCoy Chanel day suit from 1966, while the other is an authorized, licensed copy in the same wool boucle material but made in the U.S. in 1967.

When worn, the copy could easily pass for the real Chanel, but on display it’s plain to see which one has the label and which one doesn’t. Chanel herself did not lose any sleep over copies of her designs. In this, she is quite unique.

“Fashion should slip out of your hands. The very idea of protecting the seasonal arts is childish. One should not bother to protect that which dies the minute it is born,” reads the quote attributed to Coco Chanel in the exhibition press release.

Most other designers went to great lengths to protect their designs from being copied.

Madeleine Vionnet, for example, resorted to marking each label bearing her name with her own thumbprint as well. This was not much of a deterrent, and the unauthorized copy of her “Little Horses” dress from 1924 is included in the exhibition. In her original creation Vionnet went as far as developing a special beading method that would be hard to recreate. But for someone who had never seen the original, the fake would be a credible dupe.

What Is a Fake?

Getting back to the original question: What is a fake?

Elia explains that fakes come in a variety of ways. There are the garden variety knock offs— unauthorized copies of designer wear but made of inferior quality materials. Lower end chain stores specialize in selling knock offs, but the consumer is not under any illusion that they are buying the original designer garment.

Then there are counterfeit products that are illegal because they aim to deceive the consumer. In this category there are what “experts refer to as ‘super fakes’ where it is hard for even an expert to identify, because the material can be the same. Some also come with a serial number, and some also originate from the same factory that the originals come out of,” Elia said.

Point in case is a pair of counterfeit Louboutin “Pensee” shoes that are also part of the exhibition. They came with an authentication card and label, but are made in China.

The U.S., unlike France and Italy, has no law that allows for U.S. fashion designers to copyright an entire garment or accessory design. Nevertheless, according to a video commentary in the exhibition, recently the NYPD closed down 18 counterfeit manufacturing sites in New York.

What You’re Buying Into

When I asked Elia what laws the counterfeiters might have infringed on, she said that intellectual property protection is one law, but apart from that, counterfeiters on U.S. soil can be prosecuted on tax evasion, organized crime, and links to drug cartels, among other issues.