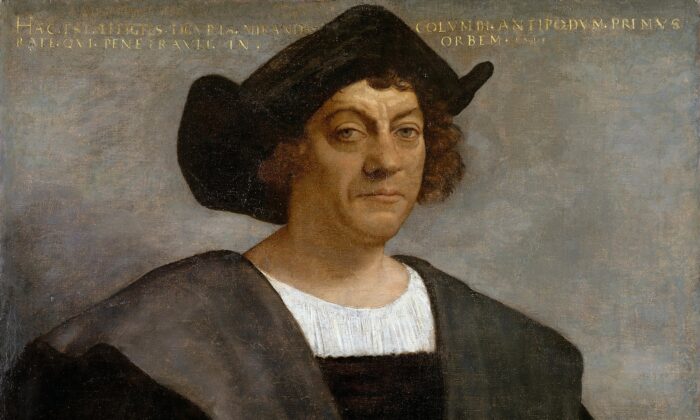 The Real Story of Christopher Columbus

One of the most notable attacks from the political left is on American history, with the 1619 Project, the criticism of America’s historical figures, and the defamation and accusations against historical people and events. Thankfully, knowledge is power, and with the proper knowledge of true American history, Americans can stand in the way of leftist lies meant to deceive the next generation and tear down the United States.

I highly recommend watching one of the latest episodes on EpochTV, “A Brave New World & Christopher Columbus,” the first of a three-part series entitled “The American Story,” to arm yourself with knowledge about true American history.

In this EpochTV episode, host Timothy Barton, president of WallBuilders, and Jonathan Richie, assistant director of the American Journey Experience, sit among 160,000 items and artifacts from American history and tell the true story of Columbus, which runs very differently from what the political left would have Americans believe. Together, they address a rewriting of American history that ignores the existence of documents and artifacts to tell a story that Barton says may be more “politically motivated than historically honest.”

What most people know about Columbus is that in 1492, he “sailed the ocean blue.” However, there is much more to his story. Today, many people are critical of Columbus. What many don’t know is that he sailed four voyages to America, and each one was very different. So if indeed he was evil, which voyage was he evil on? “If you don’t know the story of the voyages, how do you even know he was bad in the first place?” Barton asks.

Why Did Columbus Sail to America?

Columbus lived in Spain, while the country was struggling to reestablish itself after the various wars and conflicts of those days. Because of the conflicts, the trade routes to get to India had been shut off, causing people in the West to look for other options to get to India over land. While many pursued new routes, Columbus took to the history and science books dating back to the ancient Greeks and Romans, developing an idea that they could sail across the Atlantic and eventually reach India. Given the knowledge of the earth and the world at that time, this was an impressive plan he formulated. Technically, he did not discover America—there had been Vikings who had landed there, among others—however, in the Western world, no one had accomplished what Columbus did or documented it so well.

The First Voyage: Columbus Makes Friends With the Natives

Columbus’s first voyage he believed was to India, but he instead landed in northcentral and south America. He moved from island to island, encountered some of the natives there, and tried to communicate with them. Richie says this is one of the most significant moments in world history because it begins the process of the Old World and the New World coming together. They discovered a world untouched by outside societies for hundreds if not thousands of years. Columbus was an Italian but was funded by Spain, therefore sailing for Spain. The hosts show the document with the signatures from the queen and king of Spain paying Columbus to go on his voyage. He journals and documents the culture and customs of the tribes he had met and become friends with, and wrote very highly of them, saying “a better race there cannot be on earth.” This does not go along with the narrative that he was a racist genocidal figure.

Things did go awry, however. Columbus was sent with three ships, but one ship was lost. The tribes helped save the crew, but not all the crew fit on the two ships, which led them to leave some of the crew behind. The native tribe tells Columbus that they aren’t the only tribe on the island. They warned of another very warlike tribe, which would raid their villages, steal their men and women, and also were cannibals, eating the people they captured and enslaving the rest. Columbus was skeptical of this, thinking the world to be more civilized than that. So he left, returned to Spain, and began preparing for a second voyage. This was more of a colonizing voyage, meant to establish a trading post and find the mainland, as well as rescue the men they had left behind.

Upon Columbus’s return, they found the men they left behind, but they did not find them alive. Instead, they discovered bodies that had been cannibalized. Outraged, Columbus and his men were ready to go to war to defend the honor of the men who had been eaten. Their native friends asked to create a coalition force and go with them because one of the king’s wives had been stolen and another killed by the cannibal tribe. They sailed out, found the tribe, and defeated them in battle. Columbus enslaved some of the captives and sent them back to Spain. This instance is where Columbus is often painted as a slave trader, but Richie says you have to contextualize it. In the 1400s, after a war where you conquered a people group, there were two main options: you could kill all the people you defeated, or enslave them. The cannibal tribe would have a third option where you would eat some of the people. The only natives Columbus ever approved of enslaving were natives he had conquered in a justified war, where his men had been attacked and eaten, and that he had fought with his allies who were other native Americans.

The EpochTV episode notes that Columbus did not turn on the natives but that he and other natives conquered this particular tribe. Interestingly, the tribe Columbus conquered (the Carib) is also a well-documented historical tribe, known for their horrific practices towards conquered people, such as castrating infants and fattening them like animals, then eating them. The Carib would keep women to be slaves or rape them, and any children born from the captives would be eaten. This was shocking and evil to Columbus and his men.

The 3rd Voyage: Trouble in the Ranks

On the third voyage, Columbus found that the Spanish he had left on the second voyage were in full revolt against him and did not want to be told what to do anymore. These men were not missionaries trying to cultivate or convert the native tribes, they were Spaniards who wanted to take the wealth and resources of the native lands. Columbus had put policies in place saying they could not take from the natives without giving something of value in return, and many did not like this. Columbus also found the Spaniards doing other bad things, such as enslaving and killing some of the natives. When he put a stop to it, the Spanish got upset and sent word to the king and queen accusing Columbus of being a tyrant and of doing the very things they were doing. So, the king and queen sent someone to investigate and get to the bottom of what was happening. Upon arrival, this person found Spaniards who had been hung for their crimes against the natives. This person put Columbus in chains and sent them back to Spain to stand trial before the king and queen. Interestingly, the only people the investigator had interviewed were the Spaniards who were revolting against Columbus. In Columbus’s trial, he was able to tell the other side of the story, and upon hearing all the information, was exonerated of every charge against him. Reinstituted of his titles, Columbus was sent on another voyage.

On the fourth voyage, Columbus was shipwrecked for over a year. The Spanish ignored his request for aid due to the previous tensions, but eventually, Columbus got back to the colonies and returns to Spain. Barton notes that all this information is laid out in detail and footnoted in the book “The American Story,” which is available on the Wallbuilders website.

“So here’s the reality: There’s a lot more to the story than we hear most of the time,” says Barton. He encourages people to refer to the original historical documents, which can be done by following along with this three-part series on EpochTV. “We as a people need to stop trusting what somebody else tells us and we have to do the research for ourselves,” says Barton.