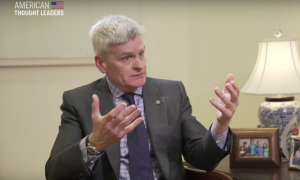 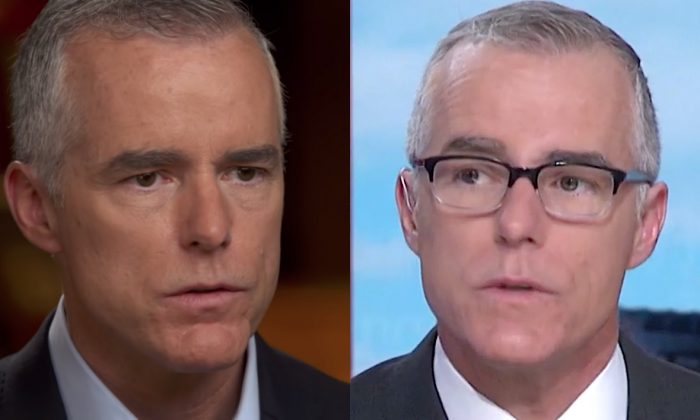 Former Deputy FBI Director Andrew McCabe sent shockwaves across the nation earlier this week when he admitted during an interview with CBS News’ “60 Minutes” to having discussed invoking the 25th Amendment in an effort to remove President Donald Trump from office.

McCabe, however, began to downplay the significance of his comments in a subsequent interview on MSNBC’s “Morning Joe” program, contradicting facts he had previously stated.

The real story goes even deeper.

A review of the transcripts of closed-door testimonies given to congressional investigators by former senior FBI officials helps to reveal what McCabe had told them.

McCabe’s own congressional testimony reveals that, despite his focus on the 25th Amendment comments in his interviews with media, he never brought up the issue with congressional investigators.

To understand the full scope of McCabe’s actions, it’s important to revisit the events in early May 2017, when Trump fired FBI Director James Comey on the recommendation of Deputy Attorney General Rod Rosenstein.

Two days after Comey was fired, on May 11, 2017, McCabe testified before the Senate Intelligence Committee. While the hearing’s original intent had been to focus on national security threats, Trump’s firing of Comey completely altered the topic of the hearing.

McCabe, who agreed that he would notify the committee “of any effort to interfere with the FBI’s ongoing investigation into links between Russia and the Trump campaign,” told members of Congress that there had been “no effort to impede our investigation to date.” In other words, McCabe testified that he was unaware of any evidence of obstruction from Trump or his administration.

McCabe, however, failed to inform the committee that he was actively considering opening an obstruction-of-justice probe into Trump—a path he would initiate in a meeting with Rosenstein just five days later.

On the morning of May 16, 2017, Rosenstein allegedly suggested to McCabe that he could secretly record Trump. It was at this meeting that McCabe was “pushing for the Justice Department to open an investigation into the president,” according to witness accounts reported by The Washington Post.

In addition to McCabe, Rosenstein, and special counsel to McCabe, Lisa Page, there were one or two others present, including Rosenstein’s chief of staff, James Crowley, and possibly Scott Schools, the senior-most career attorney at the Department of Justice (DOJ) and a top aide to Rosenstein.

According to comments in the Washington Post article relayed by one of those present at the meeting, the conversation between McCabe and Rosenstein was framed in an entirely different light, noting that Rosenstein responded with sarcasm to McCabe, saying, “What do you want to do, Andy, wire the president?” It was most likely Crowley who was being referenced.

Sometime later the same day, both Rosenstein and Trump met with former FBI Director Robert Mueller in the Oval Office. Rosenstein would appoint Mueller as special counsel the following day, on May 17, 2017, and in doing so, Rosenstein removed control of the Trump-Russia investigation from McCabe and put it in the hands of Mueller.

This was confirmed by a statement last week by a DOJ spokesperson, who said, “The deputy attorney general in fact appointed special counsel Robert Mueller, and directed that Mr. McCabe be removed from any participation in that investigation.”

McCabe was later fired for lying to the DOJ inspector general and is currently the subject of a criminal grand jury investigation.

In the “60 Minutes” interview, McCabe said the issue of invoking the 25th Amendment was actively discussed between Rosenstein and himself—to the point where the issue of how many Cabinet members might support such an action was raised:

McCabe: Discussion of the 25th Amendment was, was simply, Rod raised the issue and discussed it with me in the context of thinking about how many other Cabinet officials might support such an effort … It was really something that he kind of threw out in a very frenzied, chaotic conversation about where we were and what we needed to do next.

Pelley: Rosenstein was actually openly talking about whether there was a majority of the Cabinet who would vote to remove the president?

During a subsequent interview on MSNBC’s Morning Joe, however, McCabe struck a notably different tone, saying there was not an active discussion to remove the president. Gone was any participation by McCabe, nor was there any discussion of possible participation from other Cabinet members:

McCabe: We felt like if the president has obstructed justice for the purpose of negatively impacting our ability to investigate Russian interference with the campaign and Russian potential connections with his own campaign effort, why would any president do that? Why would a president not want the FBI to understand exactly what the Russians have been up to in our political process?

Geist: And based on that you were discussing the 25th Amendment, which removes a duly elected president from office?

McCabe: The conversation was not about removing the president.

Geist: Well, that’s what the 25th Amendment is.

McCabe: Rod brought up the 25th Amendment—mentioned it in the course of a wide-ranging and frenetic conversation. It is not something that I’m aware of he took any action to pursue. I don’t know about any other meetings that included discussions of it. It was simply one thing, one topic, in the midst of a whole host of issues that we were thinking about and kind of working through our heads at that time.

Geist: Did he present that idea to other Cabinet officials, because as you know, you have to count heads to see ‘Do I have the votes to remove the president.’

McCabe: Not that I’m aware of. I have no indication of that.

Some media have suggested that FBI general counsel James Baker provided corroboration of McCabe’s original version of events—that Rosenstein offered up the idea of wearing a wire to record the president and discussed invoking the 25th Amendment. There’s one significant problem with that line of argument: Baker was never part of the actual conversations with Rosenstein.

Everything Baker understood to have transpired, every detail, came from McCabe himself, and perhaps Lisa Page. We know this from closed-door testimony given by Baker to congressional investigators that was reviewed for this article.

Rep. Meadows: Were you in the meeting when deputy AG Rod Rosenstein suggested to wire tap or record the President of the United States as has been recently reported allegedly in the McCabe memos?

Rep. Meadows: And how did you hear about those meetings?

Mr. Baker: I heard about them, I believe, from Andy and from Lisa.

Baker, who indicated that McCabe had several conversations with Rosenstein, told investigators he didn’t “connect the 25th Amendment thing to the wire. Maybe it was my mistake mentally. I connected that more to the obstruction matter.”

Exactly who these Cabinet members might be has never been elaborated on and, according to McCabe’s most recent interviews, probably don’t exist. As to precisely why Rosenstein might elect to wear a wire and what that might accomplish, Baker seemed a bit uncertain, telling lawmakers, “that is a good question. It was not exactly clear.”

Nowhere in McCabe’s own testimony before congressional investigators on Dec. 12, 2017, are the Rosenstein conversations mentioned. Nor do any such references occur in the testimony of Page. Given the importance that McCabe has recently placed on these alleged discussions, their omission from his testimony seems telling. Both transcripts have been reviewed by The Epoch Times.

No Follow-Up After Alleged Comments

We know from Baker’s testimony that despite the supposed concerns raised by McCabe, no notification or follow-up actions were ever taken with the DOJ with respect to the comments McCabe attributed to Rosenstein.

Rep. Meadows: All right. So multiple people at the FBI knew that there was this conversation about invoking the 25th and taping the President of the United States, and you didn’t tell the Attorney General?

Mr. Baker: Correct, to my knowledge. I did not.

Trump Didn’t Know He Was Under Investigation

All of this activity was supposedly precipitated by Trump’s firing of Comey and subsequent fears that he was engaging in some sort of obstruction into the FBI’s investigation. But again, there was a problem. Trump was never told he might be the subject of a criminal investigation, a fact that even Baker admitted to during his testimony:

Mr. Baker: I think—my understanding and belief is that he never told—that he told the President the opposite.

In other words, if Trump was never told he was under investigation, his firing of Comey could not have been for the purpose of obstructing an investigation of himself.

Baker responded to Ratcliffe’s observation by claiming, “But he could have tried to obstruct the investigation with respect to others.”

However, this line of logic quickly led to another conclusion that was captured in a sequence between Ratcliffe and Baker:

Mr. Ratcliffe: Okay. So your notion is that President Trump may have obstructed justice possibly because of the actions of others. Are there any limitations on a President’s pardon authority?

Mr. Baker: Well, the contours of the President’s pardon authority, I think, are not completely clear. So the question, for example, can the President pardon himself?

Mr. Ratcliffe: But we’re talking about others. I’m trying to figure out why President Trump would obstruct justice into an investigation of Michael Flynn or Paul Manafort or anyone else if he had the ability to pardon those folks, which I believe is an absolute authority under the Constitution.

No Evidence of Collusion Found by FBI

“You and I both know the odds are nothing. If I thought it was likely, I’d be there, no question. I hesitate, in part, because of my gut sense and concern there’s no big there there.”

Page, who was asked about this text during her July 2018 testimony, said, “So I think this represents that even as far as May of 2017, we still couldn’t answer the question.”

Baker, who was questioned about the Strzok text, was then asked if he’d seen any evidence to the contrary. He stumbled a bit in his reply:

Rep. Meadows: Do you have any evidence to the contrary that you observed personally in your official capacity?

Mr. Baker: So the difficulty I’m having with your question is, what does “collusion” mean, and what does “prove” mean? And so I don’t know how to respond to that.

What McCabe’s FBI Was Really Investigating

Toward the very end of Baker’s final day of testimony, he finally disclosed the actual substance of the discussions taking place at the upper echelons of the FBI:

Rep. Ratcliffe: So there was—there was a discussion between those folks, possibly all of the folks that you’ve identified, about whether or not President Trump had been ordered to fire Jim Comey by the Russian Government?

Mr. Baker: I wouldn’t say ordered. I guess I would say the words I sort of used earlier, acting at the behest of and somehow following directions, somehow executing their will, whether—and so literally an order or not, I don’t know. But—

Rep. Ratcliffe: And so—

Mr. Baker: As a—it was discussed as a theoretical possibility.

Rep. Ratcliffe: When was it discussed?

Mr. Baker: After the firing, like in the aftermath of the firing.

The FBI, with no actual evidence of collusion after 10 months of investigating, began discussing a complete hypothetical at the highest levels of leadership as a means to possibly open an obstruction-of-justice investigation of the president of the United States.