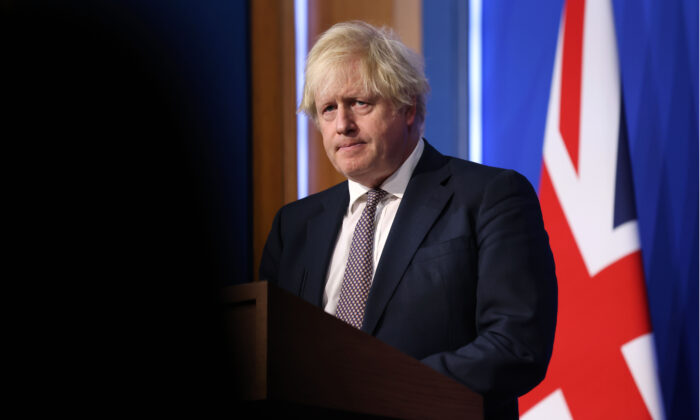 UK Prime Minister Boris Johnson speaks during a press conference after cases of the new COVID-19 variant were confirmed in the United Kingdom in London on Nov, 27, 2021. (Hollie Adams/Getty Images)
Viewpoints

Students of scandal-ology like myself have been looking across the Atlantic lately. For some reason, the scandal-hungry American media has lapsed into somnolence since this time last year—about the same time when President Joe Biden took office.

I mean, of course, apart from occasional outbursts of vestigial rage directed at his predecessor in office—who is still seen as what The New York Times calls an “existential threat” to the Republic.

Of course he is. The NY Times has been harping on the same string for more than six years and has seen steady growth in digital subscriptions from fellow Trump-haters around the world over that period. Trump-as-existential threat is the paper’s bread-and-butter.

Elsewhere, the scandal of Donald Trump and Trumpism isn’t selling as well as it used to. Perhaps that’s one reason why CNN’s viewership has crashed into the cellar during the past year.

Meanwhile, a hundred and one potential Biden scandals continue to leave our media cold. They seem to be determined that he shall come to the end of his term still able to boast, as President Barack Obama did, that his administration has been “scandal-free.”

But over in Britain, formerly known as the mother country, there’s a nominal Conservative in No. 10 Downing Street who is as much God’s gift to the scandal-hungry British media as Trump was to their American counterparts.

For the last week or so, they’ve been licking their chops at the prospects of Boris Johnson’s imminent defenestration by his fellow Conservatives in Parliament—since there, they have the admirable custom of allowing party leaders to be cashiered only by members of their own party or coalition of parties and not, as in the United States, by the opposition.

Why would the Conservatives, who are also known as Tories, want to do this when they have a working majority of 77 seats in the House of Commons over all other parties?

Check that. It’s now 75 seats, since one Tory member of Parliament, the MP for Bury South, “crossed the floor,” as they say, to join the Labour opposition on Jan. 19.

Lots of other Tories are cross with their own prime minister, too, because he approved—or possibly didn’t approve, or even know about—a garden party for staff in the prime ministerial garden of No. 10 in May 2020.

In that month, as you may remember, both the British and the American governments had recently imposed a lockdown policy on the people, ostensibly to protect them from the spread of the coronavirus—something thought to be so terrible that it was worth devastating the national economy and social life in order to prevent.

In short, no garden parties were allowed—at least not for ordinary people. Nor was any other sort of socializing, even visiting friends and relatives who were sick or dying.

Therefore, no more than a suspicion that the prime minister might have winked at a purely social gathering in his own backyard has been enough to drive the media, the opposition, and even significant numbers of Tories wild with indignation at the thought of such hypocrisy.

It seems possible that Johnson, elected in a landslide just over two years ago, may soon be an ex-prime minister.

A few cooler heads have thought to ask this question: If the government and senior civil servants were so insouciant about the risk of ignoring pandemic precautions for themselves, why were they so punctilious about applying them to everyone else? Could it be that they thought the danger of ignoring them less than they were pretending to think it was in their public pronouncements?

I believe it could. But then we must ask, why did they play up the danger in public and minimize it in private?

I believe the answer is fear of scandal. “The science,” as it was then called, was issuing apocalyptic warnings of the terrible social consequences of any failure to observe the prescribed precautions against spreading the virus, and no politician with a healthy respect for public opinion would dare to disagree with “the science” about the stringency of these precautions, lest he be blamed for thousands and hundreds of thousands of deaths—which, by the way, “the science” was predicting in any case.

We saw exactly that happen in this country, when President Trump initially sought to play down the threat of the virus—in order, as he said, to prevent a panic—and was later said by his opponent in that year’s election campaign to have been responsible for 200,000 deaths as a result.

Biden, by the way, has now presided over even more deaths himself, but now that’s just one of the queue of scandals in his case that are waiting—in vain, as it seems—for the media to pounce on them.

It seems entirely plausible to me that Johnson, like Trump, should have been privately skeptical that the draconian measures proposed by “the science” were really necessary while being unwilling to say so in public for fear of just such a scandal as now engulfs him anyway. Oh, the irony!

Interestingly, shortly after Trump himself caught the disease and recovered from it, as Johnson had done earlier, a group of highly qualified scientists also called into question, in the Great Barrington Declaration, the recommendations of “the science”—which is to say those rival scientists who had been chosen by the media to represent science itself.

We now know that Dr. Anthony Fauci and Dr. Francis Collins, two of the media-approved scientists, conspired to suppress the Great Barrington Declaration as the work of a scientific “fringe.” Where, after all, would they have been if people had come to think that the sacrifices of the previous six months (at that point) had been unnecessary? Wouldn’t they have been immersed in scandal themselves?

Just kidding. Of course they wouldn’t. They knew that the media would have their backs. And so the Great Barrington Declaration didn’t even need to be publicly denounced, and was instead largely ignored by the media, leaving the power of “the science” and its media-approved exponents to dictate which restrictions on people’s freedoms were necessary and which (if any) were not.

The real scandal, in other words, both here and in the UK, is (or ought to be) the abdication by our political leaders, for fear of media and scientific blackmail with the threat of scandal, of their constitutional responsibility to consider the wider social and economic consequences of their policies for dealing with the pandemic.

Don’t look for that scandal to appear on the media’s radar screens anytime soon. Much better that we focus our rage on Boris Johnson (or Donald Trump, if you prefer) for daring to doubt, even in private, the omniscient “science” that the media demand we worship.