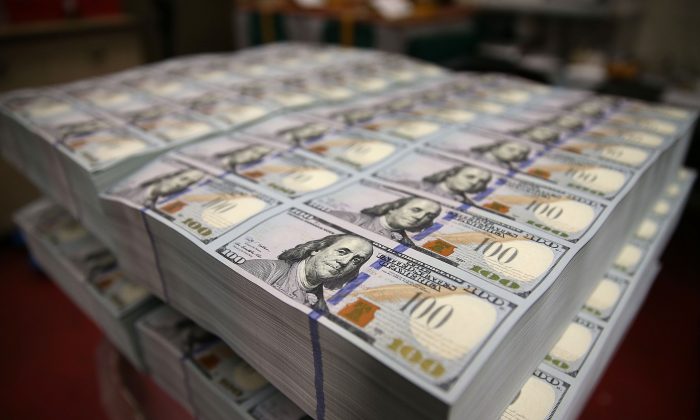 James Grant, the chief editor of Grant’s Interest Rate Observer, recently said about negative interest rates and a ban on cash: “What precedes implementation of these ideas is a discussion of them. I think this is coming.”

Indeed, the orchestrated support from the usual suspects among the mainstream media, pundits, think tanks, banks, and governments around the world is astounding.

Willem Buiter, the chief economist of Citigroup, summed up the benefits—at least from the government’s point of view: All financial transactions can be taxed by the government or charged a fee by the banks, and bank runs are eliminated because there is nothing in the bank that’s worth making a run for.

Something is going to go wrong is what I’m saying.
— James Grant

Germany wants to introduce an initiative in the European Union to ban the 500 euro note and also ban all transactions above 5,000 euros in cash.

All of the proponents know that negative interest rates, a key element in central banks’ objective to achieve meaningful inflation, needed to reduce the debt burden of overextended speculators and businesses, won’t happen unless they also ban cash. That’s why the two ideas often go hand-in-hand in public discussion.

“They will try negative rates to some extent. I think it’s going to be hard to push the Fed Funds rate below negative 1. That’s going to be difficult. People can basically take out cash and put it in a vault and they get a zero return on it,” said Joseph Gagnon, a senior fellow at the Peterson Institute for International Economics and former associate director at the Federal Reserve board.

Buiter and Gagnon are honest and cut straight to the chase of the economics involved. Banning cash and imposing negative rates allow one to tax and charge consumers even more than today, forcing them to either spend more in the process or invest in more speculative arenas, such as the stock market.

“There is an alternative to saving which is called investment or speculation. It involves much greater risk. A negative interest rate is not only a tax on saving, it is the destruction of saving,” said Grant.

Most other proponents of a ban on cash say the measure would reduce money laundering, crime, and terrorism.

While this is essentially true, it is somewhat odd that the same people didn’t think about this 10, 20, or 30 years ago, as crime, money laundering, and terrorism unfortunately have been around since at least then. Instead, it took them until now: Conventional and unconventional monetary tools have reached their limit, and negative interest rates seem to be the only choice left.

“Radical monetary policy begets more of the same, that has been the rule. What doesn’t work … there’s more of it,” said Grant.

What is not astounding, however, is the way the general public meets the two ideas with wholesale skepticism. To illustrate Mr. Gagnon’s point, the sales of safes are booming in Japan, one of the countries further along in the quest to pass negative interest rates to the public.

In fact, there are many indicators that pushing negative interest rates on to consumers—many institutions are happily paying them in the form of negative yields on government bonds—will not be a linear move from 1 to 0 to -1. The system may break crossing the magical number zero.

According to a survey undertaken by Dutch bank ING, 77 percent of respondents said they would take their money out of the bank if interest rates went negative, precisely the bank run that Buiter would like to avoid and precisely the reason negative interest rates would have to go hand-in-hand with a ban on cash.

In addition, lower rates don’t mean savers will spend more; instead, it seems to have the opposite effect. Data compiled by Bank of America shows that in countries with very low or negative deposit rates, savers tend to save more, not spend more.

In Switzerland, for example, as the deposit rate moved from a bit less than 1 percent in 2008 to close to 0 percent in 2015, the savings rate increased from 21 percent to 24 percent. The same move can be seen in Denmark and Sweden in more recent years. The motto: If I am getting a lower return on my savings, which lowers my total savings goal, I just have to save more to achieve my target.

“So negative interest rates are a conceit of the academic economists who run the monetary institutions of the world. I think the theory is dubious and the practice, as we have seen it so far, is equally doubtful,” said Grant.

People can basically take out cash and put it in a vault and they get a zero return on it.
— Joseph Gagnon

Even if all cash were banned and people were forced to accept negative rates on their bank deposits, it may well not lead to more consumption, but merely bid up the prices of other stores of value, like gold.

And while stocks and real estate will certainly get a boost, most studies show that real, inflation-adjusted returns are often negative because wrong incentives distort the pricing mechanism. Capital is misallocated, and transactions slow down if people are trading goods and services in gold ingots rather than wire transfers.

In short, the push for negative interest rates and a ban on cash has nothing to do with terrorists or money laundering. It has everything to do with bailing out the banks and trying to remedy central bank policy that didn’t work in the past. As James Grant put it: “Something is going to go wrong is what I’m saying.”