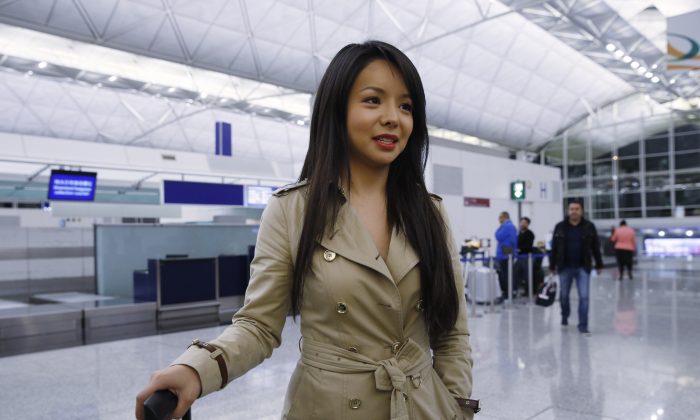 Anastasia Lin, a 25-year-old Canadian actress who holds the title of Miss World Canada, has made headlines for the last week after being denied an invitation letter, and then a visa, to enter China for the finals of the pageant, which is being held in the glam-city of Sanya, on Hainan island.

Lin has starred in several films depicting human rights abuses in China, spoken to U.S. Congress, and is herself a practitioner of Falun Gong, a practice of meditation and moral instruction that has been brutally suppressed in China since 1999.

The clash (“Beauty vs. the Party,” one reporter called it) has captured the world’s attention. Aside from the obvious appeal of the story—the idea of a beauty queen being barred from a pageant because a government objects to her activism is at once alarming, amusing, and ridiculous—there is a deeper message lurking beneath the surface about the People’s Republic of China and its place in the world.

The message is that the Communist Party is happy to join in global institutions, as long as those institutions shape themselves to the political needs of the Communist Party. It is a straightforward demand, and to a large degree mirrors the demand made upon the Chinese people. The stalwart activist Guo Feixiong, just sentenced to six years imprisonment, would never have been placed in a dank dungeon with no yard time for 800 days, for example, if he simply did what the Party expected of him.

Punishment for international actors takes other forms, mostly economic, but the principle is the same. In the Party’s ideal world, punishment would not even be necessary: all would simply align themselves with the Party’s needs, not challenging or questioning, but standing in loyal support, a bit like the eight minor parties in China, which form China’s “System of Multi-Party Cooperation and Political Consultation” (under the unified leadership of the CCP!)

These ideas have been explored at wonderful and erudite length by Christopher Ford (among others), in his books and speeches. An excerpt:

The central focus of PRC policy is thus about power-maximization insofar as this entails status-maximization, and thus also the solidification of a global guiding role for China at the center of all human affairs. Chinese officials are remarkably candid about this. “Countries with powerful cultural values,” it is said, “… export these to the whole world, which countries with poor cultural appeal have to accept.”

And as China’s power grows, it is expected that Beijing will speak with ever greater authority in the world, and will use this authority to fashion the “harmonious world” it desires. Chinese officials have set it as their aim to “control the discourse” in the international arena by pushing their own “message- and agenda-setting” agenda in global affairs, winning for the PRC what they have called “discourse control” for the whole human community as a component of China’s long-anticipated “return” to greatness.

In another article, Ford recalls his experience participating in a forum with People’s Liberation of Army thinkers:

Rather than being about adjudication between or management of competing claims in a pluralist world, the PLA participants seemed to view preventing international conflict and ensuring future “trust” as aiming principally at keeping competing claims from being conceived or asserted in the first place—specifically, by obtaining others’ validation of and agreement with China’s own claims, and its narrative of itself in the world. In this essentially monist conception of order, identifying and managing differences within a framework of competing interests took a back seat to the construction of a moral hierarchy among strategic players, as a result of which interests wouldn’t ultimately really have to compete at all. (Participants did not have to be homogenized, but they had to be “harmonized” by being fit into a status-gradient within a single system of hierarchic moral order, acceptance of which was a prerequisite for “trust,” and which would in fact produce peaceable and orderly behavior.)

There is a final thought to add to this, though—which explains why, no matter the public relations cost, the approach is utterly necessary.

Simply consider the alternative. Hollywood is allowed to freely create films about any aspects of modern China it pleases; foreign journalists (and Chinese ones) are able to report on China without obstruction or censorship; Anastasia Lin is free to participate in the Miss World pageant in Sanya and speak her mind.

In each case the Communist Party’s lies would be laid bare: that China is not such a People’s Paradise after all; that a government which soaks up, channels, and controls so many social resources is more than a little responsible for the consequences of the problems that result; that Falun Gong isn’t the menace to society the Party claims, and that the persecution is wrong. Fundamentally, free debate and information—would it be too old-fashioned to simply say ‘the truth’?—would expose and undo the basis of the Party’s claim to legitimacy.

Incidents like Miss World Canada are only notable because they are glitches in this marvelous system. If the contestant from Canada this year made a cause of exposing domestic violence, rather than persecution in China, we would not have been reminded of the kind of system the Chinese Communist Party imagines, and ever strives to create, for the rest of us. When it comes to China, let’s celebrate the glitches.