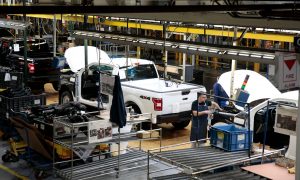 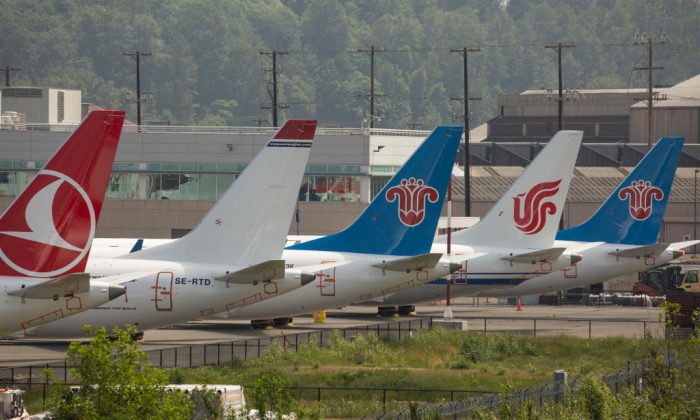 The tails of Boeing 737 MAX airplanes are seen as they sit parked at a Boeing facility adjacent to King County International Airport, known as Boeing Field in Seattle, Washington, on May 31, 2019. (David Ryder/Getty Images)
US News

Business investment slowed sharply in recent months, prompting some analysts to read it as another recession sign and blame the U.S.–China trade war for the slowdown.

However, the main culprits could be falling oil prices and aircraft setbacks, which “are unlikely to cause serious harm to the broader economy,” according to Jim Glassman, head economist for JPMorgan Chase’s commercial banking operation.

“A closer look shows that the decline in capital investment, much like this summer’s softening industrial output, has been concentrated in the energy and aviation sectors,” Glassman wrote in a note.

“This implies that trade tensions with China are not derailing business investments. Instead, idiosyncratic forces, including falling oil prices and the grounding of Boeing’s 737 Max 8 jet, are skewing capital investment trends,” he added.

Second-quarter gross domestic product (GDP) slowed to a 2.0 percent annual rate from a 3.1 percent pace in the first quarter. One of the major drags on GDP growth was business investment that declined for the first time since early 2016.

Nonresidential fixed investment—which consists of spending by businesses on software, research and development, equipment, and structures—fell sharply to a 0.6 percent rate from a 4.4 percent rise in the first quarter.

Company executives are eager to invest during an economic expansion. When a recession hits, however, they take a more cautious approach and slow their business investments.

Capital investment trends have sent mixed signals this year. Investments in software and intellectual property climbed by more than 7 percent annually in the first half, indicating that businesses were eager to invest in technology, according to Glassman. However, outlays for construction and equipment slowed sharply during the same period.

In addition, the slowdown was concentrated in the oil exploration and aviation sectors instead of sectors that were heavily exposed to China trade.

The oil and gas industry slashed investments after the price of crude oil dropped to $56 per barrel from nearly $70 per barrel a year ago. Drilling activity in the sector is highly sensitive to oil prices and therefore, lower prices bring about cutbacks in oil and gas exploration investment.

“Approximately one-third of this year’s total capital investment slowdown has been concentrated in the mining exploration, shafts, and wells category, which includes investment in new oil wells,” Glassman said, adding that capital spending in the sector has dropped by 8.5 percent in 2019 after growing 14.4 percent last year.

In addition, the grounding of Boeing’s 737 Max 8 airliner has been a significant drag on the economy this year.

Since the worldwide grounding of the aircraft in March, following accidents in Indonesia and Ethiopia, Boeing has been struggling to fix software and clear regulatory demands.

The company hasn’t completely halted the jet’s production. The new planes are being held as inventory until they’re recertified to fly. But the production backlog may be reducing capital investment by $61 billion annually, according to Glassman.

This crisis “led to a 20 percent cutback in production, accounting for much of this year’s national manufacturing slump and shaving approximately half a percentage point from GDP growth in the second quarter,” he wrote.

The negative impact of the Boeing crisis on the U.S. economy will rapidly reverse once the aircraft receive regulatory clearance to fly, he said.

Many Wall Street analysts are crunching data to understand the effects of the trade war on companies’ investment activities. There is evidence that the trade dispute is leading some companies to scale back investment.

Nearly one-fourth of the companies in the S&P 500 discussed the term “tariff” on earnings calls for the second quarter, a more than 40 percent jump from the first quarter, according to data provider FactSet.

In the second quarter, Dow Chemical, for example, announced that it would reduce its planned capital expenditures for the year by $500 million because of “ongoing trade and geopolitical uncertainties.”