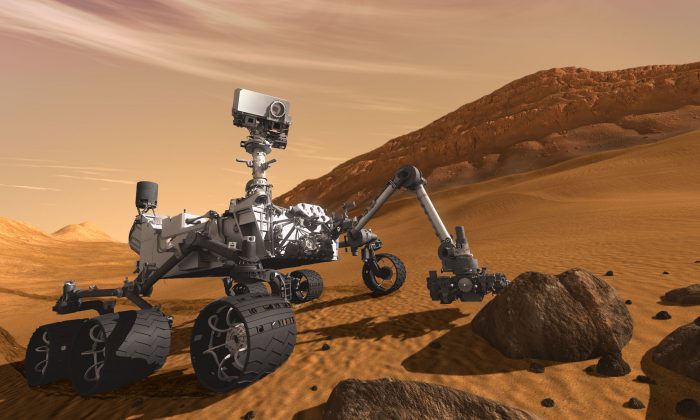 The Real Martian: What Needs to Be Done Before Humanity Can Take a Step on the Red Planet

Andy Weir, the author of the 2011 novel on which the new film “The Martian” is based, strove for realism in his fictional world; everything from the type of plant life that could grow on the red planet’s arid crust to its gravity (one-third of Earth’s) was based on up-to-date science.

But Weir had to depart from the realm of fact to that of speculation when deciding when the story would take place: He picked Nov. 7, 2035, as the day that NASA’s seven-man crew would land on Mars.

The reality is, a manned mission to Mars requires overcoming a wide range of technological hurdles, as well as ethical and financial problems.

The 2030s is the most popular decade for the planned mission to Mars—NASA set a tentative date of 2039 for when space-boots will first hit the ground . But the reason for NASA’s date may be as much psychological as practical—2039 still sounds reasonably close, compared to the 2040s or beyond.

Abhijeet Rathore, a former engineer at the Indian Space Research Organization, India’s official space agency, believes this is the case. He said over email that “2040 would be very far and any proposals for funding or motivating people would be difficult.” He may have a point.

The reality is, a manned mission to Mars requires overcoming a wide range of technological hurdles, as well as ethical and financial problems, such that the 2030s is more likely the earliest possible date rather than a practical expectation.

The towering distance between Earth and Mars—it’ll take astronauts nine months to get there, when the two planets’ orbits are aligned—means that the existing equipment used for International Space Station (ISS) missions will have to be modified and the new technology could take decades to build, perfect, and test.

A few of these tools already exist: NASA launched Dawn, the first space probe that uses ion propulsion, into space in 2007. Ion thrusters use electricity, which can be abundantly generated through solar panels in outer space, instead of rocket fuel, which would be too weighty for such long-distance missions.

Ion propulsion is enough to push spacecrafts around in space, but a denser thrust is needed to take off from Mars for the return journey to Earth. SpaceX is already testing Raptor engines that use methane, a substance commonly found on Mars, as rocket fuel.

The astronauts will also need plenty of space for moving around and exercise on their way to Mars —in zero gravity, the human body can quickly deteriorate without constant exercise — which calls for a bulky “space habitat.” NASA has already designed a 56-foot-long, 16-foot-diameter Deep Space Habitat, not including the ion thruster and the space capsule that transports the astronauts. To save on mass, the space habitat could be made out of inflatable material, and NASA is currently testing an inflatable module on the ISS.

Other space gadgets are still only in the conceptual stage. NASA plans to send an oxygen generator on a rover to Mars in 2020. The device, called the Mars Oxygen In-Situ Resources Utilization Experiment (MOXIE), will take in carbon dioxide from the planet’s thin, dusty atmosphere and turn it into carbon monoxide and pure oxygen.

“We can’t carry all the oxygen from Earth. So there are plans to send cargo beforehand, which will produce oxygen for the later arriving crew,” Rathore said.

The Martian atmosphere is far thinner than the one on Earth, which translates into a much faster atmospheric entry and more accompanying friction and heat. A space capsule landing on Mars will need a special heat shield that’s light enough and resilient enough to create drag to slow down the capsule’s fall, but at the same time not burn up in the process.

Heat shields for smaller capsules have already been used on previous Mars missions, but humans are more delicate than a rover, and NASA is currently taking ideas from students on how to build an inflatable heat shield large enough for a multiton space capsule in its annual BIG Idea Challenge.

But the biggest obstacle to a manned Mars mission concerns less with logistics and technology than with human health and safety. In space, astronauts absorb cosmic ray radiation, which unlike solar rays can’t be easily shielded, and exposure to them is a risk factor for cancer.

A 2014 study from the Public Library of Science found that spending a mere 18 months on the ISS for women, and 24 months for men, is associated with a 3 percent increase in cancer risk, which is the maximum NASA allows for its astronauts. A round-trip to Mars could easily exceed that amount of time.

Even if all of these challenges were surmountable, whether the public is willing to put up the funds to solve them is another question altogether.

Even if all of these challenges were surmountable, whether the public is willing to put up the funds to solve them is another question altogether. The construction of a Deep Space Habitat and testing all of the equipment in space could easily reach the hundreds of billions, and NASA is already strapped for cash.

The recent delay of the launch of the Orion space capsule from August 2021 to April 2023, expected to cost $8.5 and $10.3 billion, was attributed to lack of funds  by House Science Committee Chair Lamar Smith. Moreover, the public has shown its reluctance to spend more.

In a 2012 General Social Survey, only 20 percent of Americans supported more space funding; 40 percent thought that funding was adequate, and 30 percent wanted to lower it. During the Cold War, NASA could rely on the public’s fear of the Soviet Union for generous pecuniary support; today, there’s only an eclectic group of Mars colony enthusiasts.