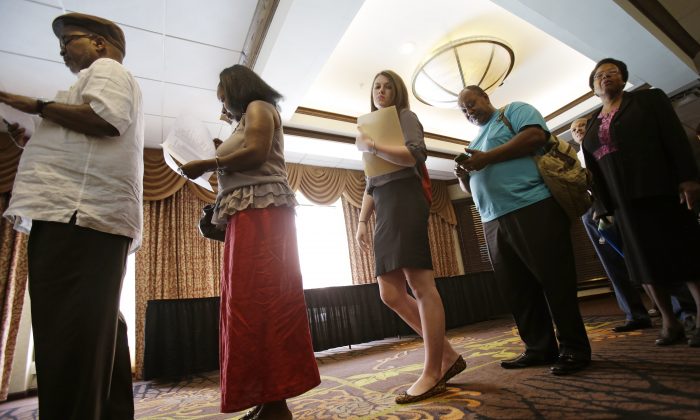 The Truth About Employment in the US

Employment statistics are a marvel of modern invention. Apply the right formulae, and you can get practically any number you want. Numerous indicators say employment is improving—and it is—but digging deeper reveals some disturbing statistics.

So today’s so called JOLTS survey provided another positive data point. The survey (Job Openings and Labor Turnover) said there were 4.671 million job openings in June, more than the 4.6 million Wall Street expected. This is a seven-year record high. Voluntary leaves also increased, confirming workers have more choice and can afford to quit their current job.

However, there are several problems with this, and practically all other employment numbers, like Non-Farm Payrolls, Initial Jobless Claims and the private ADP poll.

First, it is important to know that none of these statistics represent actual hard and fast data. Most of them are based on sample surveys of households and businesses, which are then statistically remodeled and seasonally adjusted. Nobody apart from the agencies who issue the data, such as the Bureau of Labor Statistics, knows how the data is massaged.

In addition, the BLS admits that the so called statistical “confidence” with which the data is modeled is not solid. “The payroll data are haphazard at best, and the BLS has no idea of potential reporting error,” says John Williams of ShadowStats, an independent aggregator of economic data.

The impact of GFC & the ageing population. Will we ever return to the pre-GFC employment to population ratio? pic.twitter.com/IlK3KL85jo

As a consequence, we find severe discrepancies between the different data series. For example, the change in hires in the JOLTS survey is lagging the change in the total number of non-farm payrolls significantly over the last five years.

The most widely misunderstood measure of employment is the official unemployment rate. The headline U.3 unemployment rate stands at 6.2 percent, a rather low ratio traditionally associated with capitalist economies, which usually have some slack when it comes to employment.

However, apart from the above named statistical problems, this number excludes so many unemployed people by definition, it is very much understated. For example, it excludes people who work part time because they cannot find full time work and short term discouraged workers who have given up looking for a job.

Most people who are not statisticians would posit that if you are not working, you are unemployed, regardless of the reason. Not so the government. But the BLS also publishes a series which includes these workers, the U.6 unemployment rate (12.6 percent); it’s just that nobody cares about it.

Even worse, this series excludes long-term discouraged workers, who are again unemployed, but have given up looking for more than one year. If you add them back (all 741,000 of them), the real unemployment rate is 23.2 percent, a record high.

All of these figures also exclude full time students, who are also unemployed, though they should have a very good chance of finding employment later. Should. The reality in today’s society, sadly, is that a degree does not guarantee adequate employment. So a big part of the students are bound to wind up as waiters and retail clerks, i.e. the underemployed category.

The official unemployment rate is calculated by dividing the people defined as unemployed by the people defined to be in the labor force (156 million). The labor force is supposed to reflect the number of people willing and able to work. By excluding part-time workers and discouraged workers, both numbers and therefore the ratio are artificially deflated.

One number which is harder to manipulate is the employment to population ratio. It divides the labor force by the population over the age of 16. If you take people out of the labor force, the ratio will go down and adequately reflect lower employment. Both parts of the ratio are based on Census data but are also statistically massaged in between Census surveys.

Regardless, this ratio is the most solid and it’s at a multi-decade low of 59 percent. The last time we saw fewer people working was at the beginning of the 1980s. Such a low level of employment activity indicates economic weakness. The only good news is that the economy and employment only improved in the 1980s and the ratio peaked at 64.7 in 2000.

Alas, the circumstances are different and one can only hope for a sustained recovery.