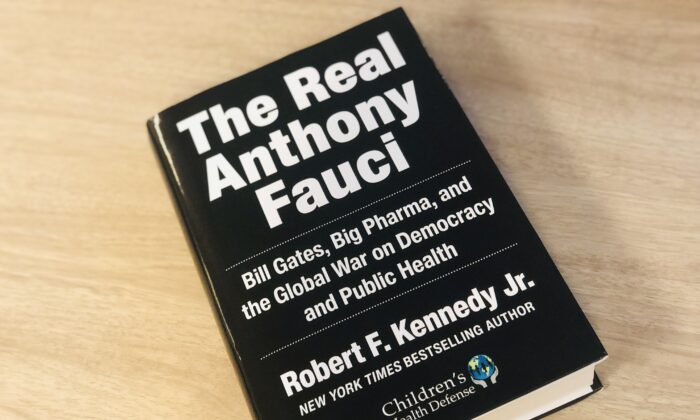 At the closing of the second year of the CCP (Chinese Communist Party) virus having caused havoc in the world, “The Real Anthony Fauci” made the #1 best seller on Amazon Charts, was also the top seller toward the end of November on Wall Street Journal’s list, and still appeared on the top 5 in USA Today’s list by mid-December.

The author, Robert F. Kennedy Jr., is an attorney, environmental activist, and founder of Children’s Health Defense. He is also the nephew of former Democrat President John F. Kennedy.

Kennedy said the book is directed to everybody who is puzzled about what has been happening in the last 20 months, in respect to what he calls a “controlled demolition of liberal democracy globally.”

With over 2,000 footnotes in the book, it serves as an encyclopedia that encompasses Big Pharma’s meddling in public health and even people’s liberties.

“Everything I put in the book is cited and sourced to peer-reviewed publications or to government database or some other reliable source. And I do not do conspiracy theories, and I don’t speculate, and I don’t look at motivations,” Kennedy told The Epoch Times.

The New York Times didn’t list “The Real Anthony Fauci” as #1 on its best sellers list. At the time of publishing, it had “The 1619 Project” listed as #1 instead.

“My book has been the #1 best seller for several weeks, and I’m not surprised that The [New York] Times has simply, petulantly refused to list it and is lying to its readership. [They] have not been a paragon of accurate reporting at any point during the pandemic,” he said.

Kennedy’s Instagram account, which boasted more than 800,000 followers, was removed earlier this year for sharing what the tech giant considered to be “debunked claims” about COVID-19 and the vaccines.

“It’s very bizarre. Instagram deplatformed me, allegedly for promoting vaccine information, but Instagram has been unable to point to a single statement that I made that is actually factually erroneous,” he asserted.

“The term ‘vaccine misinformation’ is a euphemism for any statement that departs from government proclamations, from official orthodoxies, and from the representations of [the] pharmaceutical industry about the safety and efficacy of its products,” Kennedy added.

“We’re living in an Orwellian world now where liberals who once championed freedom of speech are now are enforcing the censorship of any criticism of government policies, and of questions about pharmaceutical products.”

Kennedy has been a lifelong Democrat, and is disappointed with his party for having supported his censorship.

“Everybody in the Democratic party knows better in their hearts. But the orchestrated use of fear by government and industry has incapacitated critical thinking on a mass scale. So there you have an entire political party that is acting against its own core values, and worse yet, with the conviction of rectitude.”

The Epoch Times reached out to The New York Times and the office of the National Institute of Allergy and Infectious Diseases for comment.