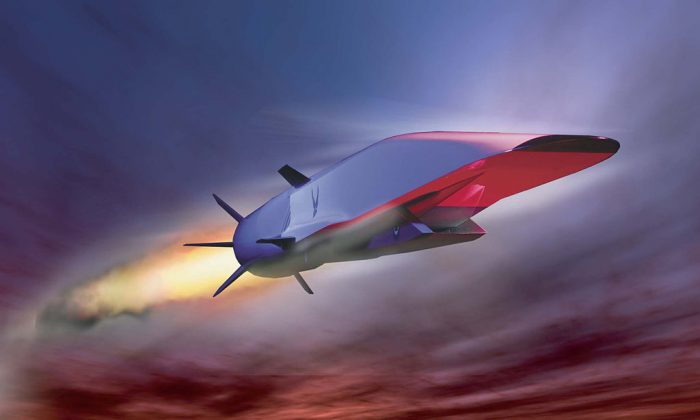 The Race to Hypersonic Speed: Will Air Passengers Feel the Benefits?

When Concorde entered service 40 years ago, it more than doubled the speed of air travel at a stroke. Following Concorde’s retirement, airliners today fly once more at subsonic speeds, but engineers worldwide are looking to a future in which high-speed flight is an everyday occurrence. Except they want to go one better: not at supersonic, but hypersonic speeds.

Aerospace giant Airbus was last year awarded a patent that details how a future hypersonic aircraft, with delta wings reminiscent of Concorde, could travel at Mach 4.5—fast enough to carry passengers between Paris and Tokyo in just three hours.

But inevitably, technology that has reached the commercial realm will already have been investigated by the military. The United States, Russia, and China have all carried out test flights of hypersonic vehicles—those which travel at around five times the speed of sound—with varying degrees of success. Each also has plans for weapons systems that could be developed from them.

Because while these are often referred to as “fighter jets,” in truth the machines are more similar to missiles. Without pilots, they sit atop rockets which boost them to high supersonic speeds (Mach 4 and above), at which point they start up their own engines (if equipped) and accelerate to even faster cruise speeds—but not for long, as they usually run out of fuel quickly, and most of their flight time is spent in a glide, albeit an extremely fast one.

Current missiles have operated in this fashion for decades. Intercontinental ballistic missiles (ICBM) and some shorter-range versions use the same sort of flight path, with the missile formed of multiple rocket stages to provide enough power to arc high into the atmosphere, only flying faster and higher. The now retired U.S. AIM-54 Phoenix air-to-air missile had a top speed of Mach 5. What makes the current generation of hypersonic aircraft designs different is their capability to maneuver, making them harder to intercept.

The Need for Speed

Why bother? There are two main reasons for the fresh interest shown by the military in hypersonic aircraft. The first is that a very fast, highly maneuverable weapon is not easy to counter: it can be difficult to detect and its speed means that there is little time for defenses to react, much less to actually take any action to stop it. This makes it a threat to supposedly heavily defended targets—and most discussion of the Chinese hypersonic craft, dubbed Wu-14, and the Russian equivalent, the Yu-71, mention penetrating U.S. missile defense systems as a primary aim.

The second relates to a requirement that has become more urgent in recent years, namely to shorten response time and to attack mobile targets. While drones, satellites and the like can locate them easily enough, highly mobile enemy units—anything from terrorist groups to Scud missile launchers—will not hang around waiting for the inevitable airstrike to be called in. A very fast weapons platform with the ability to maneuver means that once found, a target will have little time and less opportunity to escape.

Of course, to create a workable hypersonic vehicle, engineers have to overcome, or at least cope with, the severe environment encountered by something moving that fast. The main problem (from which most if not all the others stem) is heat—heat from air friction and from the shock waves generated by moving faster than the speed of sound.

The temperatures a hypersonic vehicle encounters are so high that conventional materials can’t withstand them and maintain their strength. There are materials that can insulate a structure from the heat, but they tend not to be very strong in themselves, and so any breach of insulation can quickly lead to catastrophic failure—as demonstrated by the tragic loss of the space shuttle Columbia in 2003, and also of some current test vehicles. Research into new heat-resistant materials and suitable manufacturing techniques is therefore a priority.

High air temperatures also reduce the thrust of an air-breathing jet engine, so new propulsion concepts are also needed—relying on rocket engines tends to lead to overly large and heavy aircraft. Among the companies leading the way on propulsion technology is British company Reaction Engines, which is testing the revolutionary Sabre variable-cycle engine.

Supersonic Jet: Airbus to Help US Company Build One

Travelling at very high speeds will also require advanced sensors and controls. New materials will be needed again, as conventional radomes and antennae would never withstand the heat. Conformal antennae—where the craft’s fuselage skin is used as the transmitter and receiver—are a possibility, though this is not guaranteed to work. Depending on just how fast the vehicle is designed to travel, ionization of the air around it could interfere with radio-frequency sensors and communications.

Hypersonic Flight for All?

Whether it’s possible to create a crewed or passenger hypersonic aircraft is still up for debate. But producing any sort of hypersonic vehicle is a long-term project that will take a lot of time and effort—and a whole lot of money. Patents mark the ground as to where some may follow. But who out there has the will, the persistence, and the funds to do so?

Phillip Atcliffe is a senior lecturer in aeronautical engineering at the University of Salford in the U.K. This article was originally published on The Conversation.