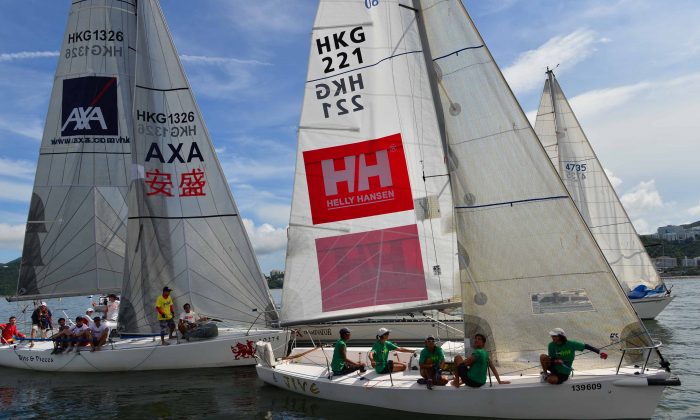 Helly Hansen title sponsored boat ‘Jive’ tries to get some motion at the start of the HKPN Race-7 of the Summer Saturday Series to start on Saturday July 26, 2014. After some delay and an unsuccessful attempt to run the race, racing for the day was cancelled due to insufficient wind. (Bill Cox/Epoch Times)
Hong Kong

The Race That Never Was

Yacht racing in Hong Kong during the typhoon season congers-up aggressive racing conditions with winds blowing at high speeds intermingled with heavy downpours. But over the last few weeks although typhoons have drifted past, creating some weather disturbance, on weekend race days the weather has generally been quite low key.

For the Helly Hansen Summer Saturday Series last weekend at Hebe Haven (Saturday July 26) it was no exception. Another 2-Races were planned for Day-4 of the series with experienced Race Officer Joseph Chan in charge together with his “Temujin” team.

Setting off from the jetty, no one was optimistic of a “full-on” racing afternoon as the forecast was for very light winds and this was confirmed on arriving at Port Shelter the designated spot for the races. There was the hint of a North Easterly and Race Officer Chan repositioned the Committee Boat and set up a course accordingly.

But when the race start time approached the wind had completely died away. The race was delayed for half an hour and then excitement… excitement, a little breeze arrived and “bang” went the 5-minute gun for the first race.

“Bang” and IRC and Sports Boats are off.

The gun sounded again to signal the start sequence for the HKPN boats. All sounded good, but IRC and Sports boats from the first start did not move… They just sat on the start line. After setting off the start for the HKPN boats there was no way for the boats to get to the start line let alone cross it… and after another 5-minutes a double blast sounded halting proceedings.

It was brave of Race Officer Chan to try… perhaps he was playing a joke on his friends? Or perhaps he was intrigued to see what would happen? It was an interesting experiment.

On the way back to the Jetty, Chan took the opportunity to explain the reason for the poor conditions – it was purely because he and his crew were the Race Officer team and suggested that he should not be called on to act as Race Officer again this year!

We hope for better weather conditions for next week’s races.

Next Race
The Hebe Haven Typhoon Series continues this coming Saturday Aug 2 with the Mirs Bay Passage Race and a non-series pursuit format return race (for those who want to take part) on Sunday Aug 3.