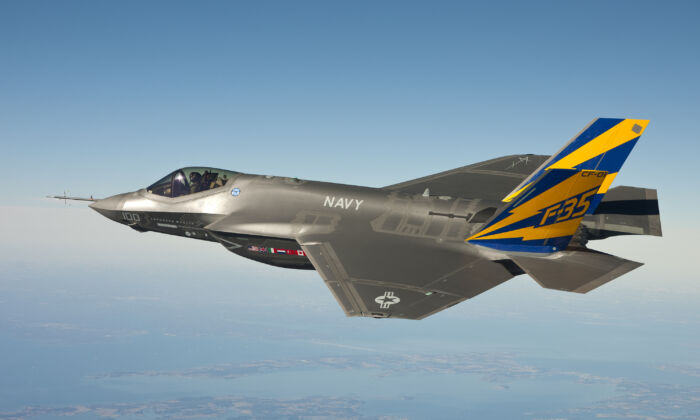 An F-35C, the U.S. Navy variant of the Lockheed Martin F-35 Joint Strike Fighter, conducts a test flight over the Chesapeake Bay on Feb. 11, 2011. (Lockheed Martin/Getty Images)
Thinking About China

The Race for a Downed US F-35C Jet

An American military F-35C jet, which was full of classified equipment, recently crashed into the South China Sea. The U.S. Navy is racing to reach the wreckage before the Chinese get to it first, for fears of the technology being copied and reverse engineered.

A $100 million U.S. Navy F-35C jet came down in the South China Sea after a “mishap,” which occurred during takeoff from the deck of the USS Carl Vinson on Jan. 24. As the plane crashed into international waters, it is technically fair game for China’s People’s Liberation (PLA) Navy to recover the plane and extract its secrets.

The U.S. Navy is keeping the exact location secret as well as the timeframe needed to recover the plane from the seafloor, but it appears that a U.S. salvage vessel is a few days away from the crash site. The black box is expected to run out of power before then, however, making the plane harder to find.

The F-35C is one of most sophisticated planes in the world, a kind of “flying computer” designed to link with other assets, which the U.S. Air Force refers to as “linking sensors to shooters.” This is technology that China does not yet have. Acquiring it from the fallen plane would give the PLA a major step-up in its military hardware, while also undermining the U.S. aircraft carrier battle strategy. Presently, it is U.S. naval superiority, keeping the PLA Navy at bay, which maintains free and open seaways in the region.

The salvage operation is being complicated by the depth of the water. Consequently, the recovery team is expected to use a deep-diving vehicle that can lift the plane off of the ocean floor. Fortunately, the U.S. Navy has experience in these types of operations. In 2019, the Navy successfully recovered a C-2A Greyhound aircraft, from 3 miles under the Philippine Sea. The U.S. Navy also assisted the British Royal Navy in recovering an F-35B fighter in the Mediterranean, which had crashed while taking off from the aircraft carrier HMS Queen Elizabeth. China also has deep-sea diving vehicles that could be used to steal the U.S. technology. And so, time is of the essence.

The Chinese regime claims most of the South China Sea, in spite of a 2016 tribunal ruling that rejects Beijing’s claims. The area is currently patrolled by 12 American warships, including two aircraft carriers and 100 war planes, as part of Freedom of Navigation operations. The U.S. flotilla is composed of the aircraft carrier USS Abraham Lincoln Strike Group, the USS Essex Amphibious Ready Group, and the USS America Amphibious Ready Group. The American vessels are accompanied by a helicopter carrier from the Japanese Maritime Self-Defense Force.

Zhao Lijian, a spokesperson for the Chinese Foreign Ministry, has denied that China is going after the downed U.S. fighter jet, claiming that Beijing has no interest in U.S. aircraft. This statement is inconsistent with the regime’s past behavior of copying U.S. hardware and even U.S. military tactics.

The PLA has recently been observed employing combat training operations copied from the United States, such as landing army helicopters on navy ships, deploying multi-domain task forces at sea, and firing land-based missiles at targets on the ocean. The regime also steals U.S. hardware technology, by engaging in foreign direct investment targeted at defense firms, hacking and cybercrime, as well as using its intelligence services and co-opting overseas Chinese researchers and students to commit espionage.

The Chinese regime’s theft of U.S. technology costs American companies and the government $300-$600 billion per year, which, according to FBI chief Christopher Wray, makes China the biggest law enforcement threat to the United States. More than money, the negative impact of the PLA stealing U.S. military strategy and hardware is incalculable. It undermines the U.S. advantage in combat, making America and its interests vulnerable to attack.