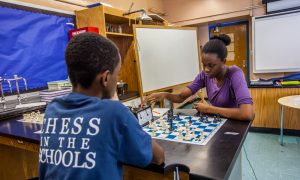 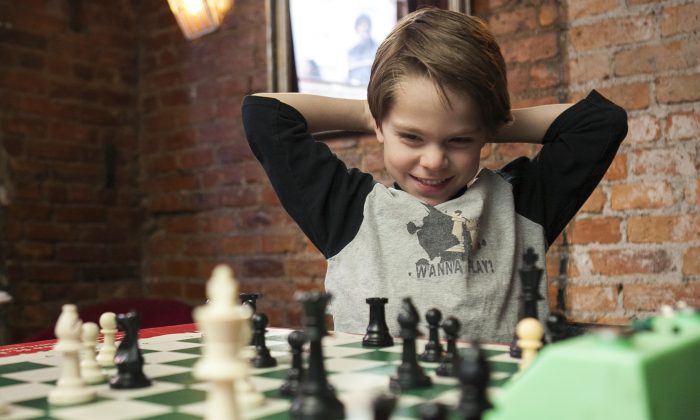 The Quirky Passion of a 6-Year-Old Chess Prodigy

NEW YORK—I met Lucas at a cozy cafe in Greenwich Village. We had a chess match scheduled for 5:30 p.m. Accompanied by his father, he arrived and sat behind the chessboard.

Being an occasional player at best, I didn’t really know what that meant. I was about to find out.

After a courteous handshake and his first five moves, I started to feel cocky. “Maybe I shouldn’t go so hard at him,” I thought. How silly of me.

After about a dozen moves each the game was over. Lucas couldn’t hold back anymore, “Your best move is to lose the f3 bishop.” I had no idea what he meant. His mind was way ahead, beyond my comprehension of the game.

Lucas executed the checkmate with ridiculous ease and I was ready to talk a bit. But he automatically assumed we would switch sides and go for a rematch. I followed through, thinking we can play and talk.

“How many moves ahead can you think?” I asked. “Like ten or something,” he said. I thought, “This kid is running circles around me.”

Lucas Foerster-Yalamas is not just any 6-year-old. He’s probably the best 6-year-old chess player in the United States.

It all started in the fall of 2012. Lucas was accepted to kindergarten at The Anderson School P.S. 334, one of five schools for the gifted and talented in New York City that admits students from all five boroughs.

The school includes chess as a part of the curriculum in early grades—and so it happened that Lucas once came home from school and asked his father, “Do we have a chessboard?” Fortunately, they did.

His parents, Bill and Sonja, are not chess players by any definition. They are not even particularly good at math, Bill revealed. But they grasped the opportunity to fuel their son’s interest, discovering a plethora of iPad applications, some designed specifically to teach chess to children.

Before long, Lucas was enthralled by the game. In January 2013 he began to attend tournaments with his school team.

Two months later, in April, Lucas caught the attention of Bruce Pandolfini, an acclaimed chess coach and author of some two dozen books about chess for children. During the chess Supernationals in Nashville a mother of one of his former students came to Pandolfini and said he’s “got to see this kid.”

“I thought I was doing her a favor,” Pandolfini said.

He sat down with Lucas, played some chess, and felt the favor was done for him. “He’s just extraordinary. One of the most talented youngsters in chess I’ve ever seen.”

Such words don’t come easy, as Pandolfini has his share of miraculous pupils. He was a chess coach to such prodigies as Fabiano Caruana, the youngest chess grandmaster in American history, and Jeff Sarwer, the Under-10 champion in the first World Youth Chess Championship.

In December 2013 Lucas won the first-grader category at the K12 Championship in Florida, becoming the best 6-year-old chess player in the country. Lucas said this was probably the point when he himself realized chess is something he’s good at.

Pandolfini recently became a coach with Chess NYC, a company trying to introduce chess to children as more of a mainstream sport, rather than a secluded activity of a few.

“We get everybody to play so we meet as many kids as possible,” said Michael Propper, the co-director of Chess NYC. The company serves thousands of children starting at the age of 4. They hand out trophies and prizes, buy pizza for lunch, and portray chess as a competitive, heart-pounding experience.

Lucas is now studying chess at least half an hour a day and training with private coaches twice a week. Meanwhile, he finds time for soccer, swimming, and piano lessons.

Pandolfini meets the boy one or twice every second week and he’s setting up a team of coaches to help Lucas improve every aspect of his game.

When asked what’s so special about the boy’s talent, Pandolfini said Lucas has an ability to discover similarities between the game he’s playing and ones he’s seen before. “He finds analogies very easily, spots patterns,” he assessed.

Lucas wasn’t quite sure why he likes chess so much. “I just like the rating points,” he said, hinting at his competitive streak.

That may be a problem for young prodigies. If pushed too hard, the pain of losing is just too much for some children, Pandolfini said. Lucas is doing well so far simply “by virtue of winning.”

But it also helps that Lucas just wants to play. “It’s more him encouraging us,” his father said. Bill recalled when Lucas attended one of his first tournaments and didn’t do so well. Yet despite that “all he asked was can he go back tomorrow and play again.”

“It’s kind of obvious that he has a real love and talent for chess,” Pandolfini said.

Pandolfini believes Lucas has a shot. “He’s on a pace to set every record there is in chess right now,” he said. “There’s nothing beyond him yet.”

Certainly, the scratchy titter Lucas lets out seeing his opponent fall for his well-woven trap will stay with me for a while.

“Did you have fun?” Bill asked his son, while preparing to leave.

“Yes, but we only played two games,” Lucas said. He then ran off to, just for fun, set up a chessboard on another table.

A 2011 University of Pennsylvania research paper shows learning chess, even for only 20 to 30 hours, improves math test scores by about 10 percent.

Correction: The article has been updated to reflect that Chess NYC doesn’t provide chess after-school program at The Anderson School P.S. 334.