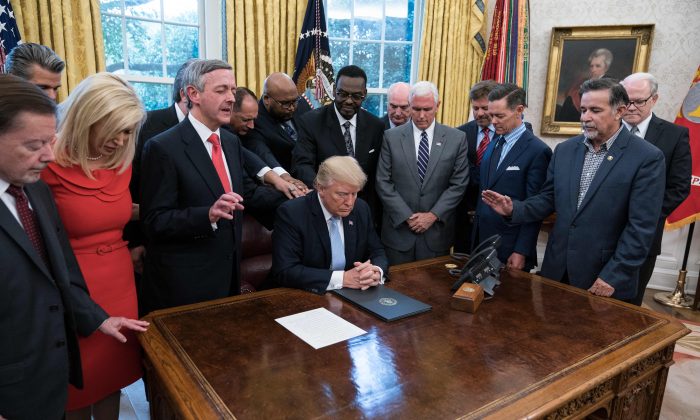 President Donald Trump and faith leaders pray in the Oval Office on Sept. 1, 2017, at the White House after Trump signed a proclamation calling for a national day of prayer on Sept. 3. (NICHOLAS KAMM/AFP/Getty Images)
US News

The Quiet Spiritual Awakening In the US Government

A moral and spiritual awakening is taking place in the United States, and it’s being helped along by a group of ministers in Capitol Ministries who hold regular, bipartisan Bible studies with members of the U.S. government.

Among the several weekly Bible studies in Washington is one attended by 11 out of 16 members of President Donald Trump’s Cabinet, according to Brian Hansen, international director of Capitol Ministries.

“They’ll even come back from foreign countries just to make sure that they’re back on Bible study days,” he said.

Additional Bible studies are held weekly with members of the U.S. House and Senate. And even more, are held in the legislatures in 43 of the 50 states across the United States. Hansen noted similar Bible studies are also being held outside North America, which he helps facilitate.

Hansen said this spiritual awakening is receiving little coverage in the media, and noted that the publicity it does receive appears intent on stopping it. “The only publicity that we really ever get is negative publicity,” he said. The movement has an almost grassroots nature to it, driven by a “real thirst for biblical truths.”

“What we have found is it doesn’t matter if you’re Republican or Democrat, independent, libertarian—it doesn’t matter. Everybody wants to know, is there a foundation or a core to my beliefs?” he said, noting that every policy and every belief has a deeper value behind it, and their verse-by-verse Bible studies help reveal these deeper values.

“There is a large movement that is taking place,” he said. “It is growing by leaps and bounds.”

“There is such a thirst for foundation, for truth, for substance. And so we’re telling them all truths of life can be found in the word of God. Let’s look at it together there. It’s just remarkable what’s taking place.”

When it comes to government, Hansen noted the institutions are separate from religion and morality, but a person’s deeper values will always guide their decisions, regardless of what their beliefs are. He shared his belief that religion creates the foundations for moral government—and creates a baseline that can’t be changed on a whim.

“Where is the moral standard? What is the foundation?” If there is no belief in a higher authority, “who knows where society can go.”

Yet, this is where Capitol Ministries comes in. Hansen said they aren’t trying to influence government policy or decisions, but are instead working to restore the religious foundations of the world’s leaders.

He noted Vice President Mike Pence as an example of their participants.

“I can tell you that Mike Pence—and he’s not been quiet about it—he’s a man of faith.” Hansen noted that Pence has been open about his beliefs, despite the discrimination that brings in today’s society. “He’s taken a lot of heat for his stance on a lot of things, but he takes his stance boldly, without being ashamed.”

The principle ties into a deeper concept on the foundations of individual liberty, and into the nature of traditional government.

The Founding Fathers held that government is instituted among men to uphold inalienable rights bestowed on them by their Creator. If the government failed to uphold these rights, they believed the people of the country have a responsibility to overthrow it.

In other words, it was believed that government was instituted to uphold God-given rights, and it wasn’t right for the government to overstep its authority to interfere in the inalienable rights of individuals, which include life, liberty, and the pursuit of happiness.

The American experiment was one in self-governance, and traditional government didn’t stretch too far into the everyday decisions of an individual. This system of self-governance was also meant for a moral people, and people were left within the law to choose between right and wrong, and to make moral decisions when faced with the diverse complications that life can throw at us.

When people have only thoughts, abilities, and inclinations, yet lack belief, he said, “you see a rapid deterioration of morality.” The belief in an authority and law higher than government establishes boundaries and standards for evaluating government. “That is the authority that gives you freedom.”

It’s from this standpoint that Capitol Ministries works to restore belief in God among members of government.

“We’re not lobbying for laws. We’re not trying to say, vote this way, vote that way,” he said. “We just believe that we need the word of God in the hearts of legislators.”