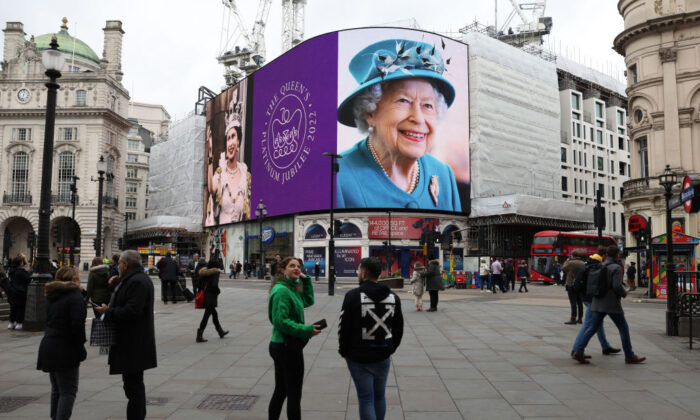 A portrait of Queen Elizabeth II is displayed on the large screen at Piccadilly Circus to mark the start of the Platinum Jubilee in London, England, on Feb. 6, 2022. (Hollie Adams/Getty Images)
Viewpoints

Historical revisionism involves the exploration of new perspectives on past events. Such exploration might find new evidence which adds to humankind’s understanding and knowledge of history. The aim is always “to find the truth in a past occurrence, complete historical panoramas, and enrich the way we view the events that have shaped our current reality.”

Provided the objective is to better understand the past, historical revisionism can be a valuable tool. But it can also be used to make unjustified, malicious, and even untrue claims about past events that have shaped history. Hence, depending on the objectives and intentions of the historians, historical revisionism could be an enlightening exercise or an invidious attempt at distorting history.

Historical revisionism was on display during the four-day Platinum celebrations of Queen Elizabeth II’s 70-year reign in the United Kingdom from June 2 to June 5, 2022.

Ishaan Tharoor of The Washington Post authored an article in which he argued that the Queen’s jubilee “can’t shake the ghosts of empire.” He referred to critics who accuse the Queen of not showing much awareness of “the misdeeds of the empire for which she remains the ceremonial figurehead, including for the violent campaign of repression carried out by British authorities in Kenya in the 1950s during the anti-colonial Mau Mau uprising.”

Tharoor quoted Patrick Gathara, a Kenyan political commentator, who said that “To this day, she has never publicly admitted, let alone apologized, for the oppression, torture, dehumanization and dispossession visited upon people in the colony of Kenya before and after she acceded to the throne.” Interestingly, Princess Elizabeth learned about the death of her father, King George VI, while she resided at a wildlife lodge in Kenya in 1952.

However, as was brilliantly demonstrated in a book authored by Lee Boldeman, Gathara’s understanding of Kenya’s history in the 1950s is deficient. Boldeman’s book “Mau Mau Whitewash—Britain Slandered” constitutes a powerful critique of the revisionist account of the Mau Mau Terror and deals objectively and factually with this dreadful part of Kenya’s history.

The Mau Mau insurrection resulted in at least 30,000 horrific killings, committed mainly by the Kikuyu tribe against other members of this tribe and white settlers. Gathara’s claim that the British colonial government committed atrocious crimes misrepresents what happened in Kenya in the 1950s.

Nevertheless, in his article, Tharoor dismissively talks about the ruling Windsor family: “Elizabeth and her kin now rule mostly over the realms of kitsch and gossip. They live their lives as bearers of centuries of weighty tradition in a far more banal present. To a gawking public, they are objects of curiosity and even pity. Sometimes, they serve as the subjects of excellent prestige television. More often, they are the source of tawdry tabloid intrigues, from the alleged sexual crimes of Prince Andrew to the House of Windsor’s internal family feuds.”

Queen Elizabeth II, the reigning Queen of Great Britain and Head of State of 14 overseas countries of the Commonwealth, ascended the throne on Nov. 4, 1952, following the death of King George VI. The Queen’s coronation took place on June 2, 1953, in Westminster Abbey. At that time, it was unlikely anyone would have predicted that, 70 years later, the world would be celebrating the Queen’s Platinum Jubilee.

At the time of her Diamond Jubilee in 2012, Her Majesty’s approval rating was around 90 percent. And a poll for The Sun newspaper, conducted last week, gave the Queen a 91.7 percent approval rating. But Prince Charles, the heir to the throne, only commanded an approval rating of 67.5 percent.

The celebrations were majestic and inspiring. The Platinum Concert at the Palace on June 5 featured Sir Rod Stewart, Diana Ross, Sir Elton John, Andrea Bocelli, who sang Nessun Dorma, and many other stars in an impressive multiple-stage environment erected in front of Buckingham Palace.

The festivities, attended by throngs of thousands of people stretching from the Palace to Trafalgar Square, also made for riveting television coverage. There were moving tributes by Prince Charles and Prince William, who both spoke about the need to protect our planet and environment and encouraged the world to take urgent action to halt the planet’s decline.

Their contribution was preceded by an emotional message delivered by Sir David Attenborough who disclosed that he started his career as a nature-loving explorer in the year of the Queen’s ascension to the throne. Their emotional statements about the need to protect our planet point to the great challenges ahead.

They also remind humankind of the apocryphal story attributed to a wise ruler, King Canute the Great, who ruled England from 1016 to 1035, who humbly told his courtiers that it is difficult to gain control over the elements and that time and tide wait for no man.

But, predictably, when a celebration like the Queen’s Platinum Jubilee comes along—a once in a lifetime experience—her opponents will criticise her reign and make malicious claims that aim at undermining the well-deserved tributes to the Monarch.

Tharoor’s and Gathara’s statements are examples of her opponents’ questionable embrace of historical revisionism to rewrite history. To raise their claims at a time of joyous celebration, damping the spirits of an appreciative public, is utterly insensitive as well as a contemptible attempt at representing history fairly and objectively.