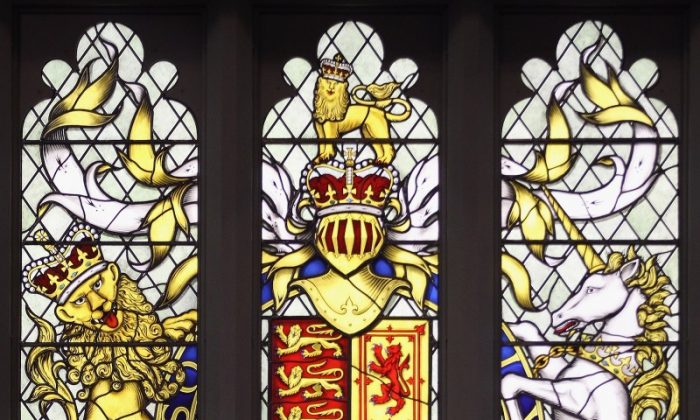 A magnificent stained glass widow is given as a gift to the Queen by British peers and MPs. (Dan Kitwood/Getty Images)
US

The Queen Addresses Parliament on her Diamond Jubilee

Citing the “virtues of resilience, ingenuity, and tolerance” as driving factors in the building of Britain, the Queen addressed both Houses of Parliament on March 20 to mark 60 years on the throne.

Westminster Hall was filled with both MPs and peers of the realm to celebrate the much-loved monarch’s reign.

In a measured speech, Her Majesty spoke of the support her family had given and “the constant strength and guide” her husband, the Duke of Edinburgh, had been throughout the past six decades.

With words of hope and optimism for the nation, and avoiding any overt political commentary, she pledged to dedicate herself anew to the service of her country in the coming years.

Marking the occasion, a magnificent stained glass window depicting the royal coat of arms with its iconic imagery of the lion and the unicorn fighting for the crown, was unveiled. The piece, by artist John Reyntiens, was a gift from the gathered members of both the House of Lords and the House of Commons to celebrate the 60th anniversary of the accession in 1952.

After the ceremony, relaxed and friendly in her manner, the Queen greeted guests informally. She chatted to the Archbishop of Canterbury, asking if he had received a letter in the post that she’d recently sent him. Then, before making her departure, she pointed to the roof, smiling as the gathered members tried to raise it. They had let out a loud “three cheers” in her honour, led by the Right Honourable John Bercow, the speaker of the House of Commons.