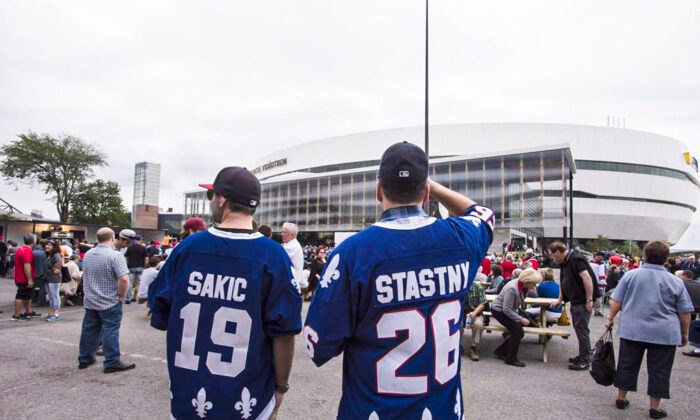 Quebec Nordiques fans wait outside the Videotron Centre in Quebec City ahead of a game between the Quebec Remparts and the Rimouski Oceanics of the QJMHL on Sept. 12, 2015. (The Canadian Press/Jacques Boissinot)
Canada

The Quebec Government Wants to Bring an NHL Team to the Capital, but Fans Skeptical

MONTREAL—Quebec politicians are meeting with National Hockey League brass in January, but it’s unclear what influence the government can have on the league or whether team owners have any interest in bringing the Nordiques back to the provincial capital.

Local fans, meanwhile, aren’t holding their breath, following a series of disappointments, and they say they aren’t so sure the government’s latest move is anything more than a public relations stunt.

Premier François Legault opened the door to such musings in November, professing an interest in seeing professional hockey return to Quebec City and announcing a senior minister had been tabbed to support the effort.

“I tell myself that if Ottawa and Winnipeg are able to have a team, we should be able to have a team in Quebec,” Legault told reporters at the time, adding that his government was looking for partners to help fund the estimated $1−billion cost of a franchise.

The Nordiques left Quebec City after the 1994−95 NHL season, relocating to Denver to become the Colorado Avalanche, which won the Stanley Cup in the new team’s first season.

Quebec City fans were optimistic about getting an NHL team back a decade ago but are much less so now, says Vince Cauchon, a Quebec City sports radio host who co−founded Nordiques Nation, a booster group that included 100,000 members at its peak. He says the recent news landed with a bit of a thud.

“We were looking for the fire behind the smoke, and it’s a rare case of smoke without fire,” Cauchon said in a recent interview about Legault’s stated ambitions. “If it’s something that was politically motivated to rally the population, it had the effect of a sword cutting through water. The reaction was negligible — even bad.”

NHL Commissioner Gary Bettman has confirmed a January meeting with “someone high up” from Quebec, but he said he knew nothing about what was on the agenda and tempered any expectations, noting that no teams were looking to relocate and that there were no expansion plans.

A spokeswoman for Finance Minister Eric Girard, Quebec’s emissary for the meeting, declined to comment until later, but she said he’s been working on the file since the summer.

About a decade ago, the possible return of NHL hockey had locals salivating at luring a struggling U.S. team back across the border. Fans decked out in Nordiques merchandise bused to different arenas in the United States and even gathered at the Plains of Abraham for a massive rally in October 2010.

But Cauchon said expansion hopes soon fizzled. The league welcomed a new team in Las Vegas in 2016 but deferred the application for Quebec City. Quebec’s capital wasn’t considered when Seattle was awarded an expansion team in 2018. Talk of moving teams out of North Carolina and Arizona never materialized.

“Heartbroken,” Cauchon said, describing the feeling among Quebec City NHL fans. “I think people will believe it when they see it, and I understand their sentiments.”

Retired Nordiques winger Alain Côté said he’s pleased the Legault government is pushing for a new team, but he says he has doubts the league will allow it.

“I find it a lot of fun that the premier is putting this forward,” said Côté, a popular winger who now owns auto parts stores in the capital.

“We have a super nice arena here in Quebec City — a modern building, so it would be fun to use it for an NHL team,” he said of the Videotron Centre, which opened in 2015.

Côté says he believes a lot has changed since the club left that plays in the city’s favour: an NHL salary cap, a new arena and a loyal fan base.

But what Quebec City doesn’t have is the league’s interest. Côté says he thinks the NHL sees Quebec City as part of the Montreal market, served by the Canadiens.

“There has to be a will, and I don’t see any from the league — absolutely none,” Côté said.

Cauchon said it’s unclear what group would spearhead a bid for a new team and gain the support of the league’s 32 owners. The previous bid was fronted by Quebecor, the telecommunications company that received a 25−year contract to manage the Videotron Centre.

Concordia University sports economist Moshe Lander said that deep−pocketed billionaires are in short supply in the province. Seattle and Las Vegas paid expansion fees of US$600 million and built billion−dollar arenas in their markets. The other question involves looking ahead to ensure long−term viability, he said.

“That’s the type of thing that will concern the NHL: if you want a toy to play with, you want to make sure what keeps a franchise going up is the next person in line is going to pay more than the previous person,” Lander said. “It’s not just a current problem, it’s an ongoing problem … the question of whose next.”

“The government is doing the right thing by getting involved in the file — not financially — but certainly showing some leadership,” Emond said.

He said he remembers boarding the bus from the Saguenay region to watch the Nordiques play. Busses headed to the old Colisée arena in Quebec City used to be a common sight in many parts of eastern Quebec.

“I can understand people’s disappointment,” Emond said. “That we’re even talking about it, I think it’s a positive thing.”