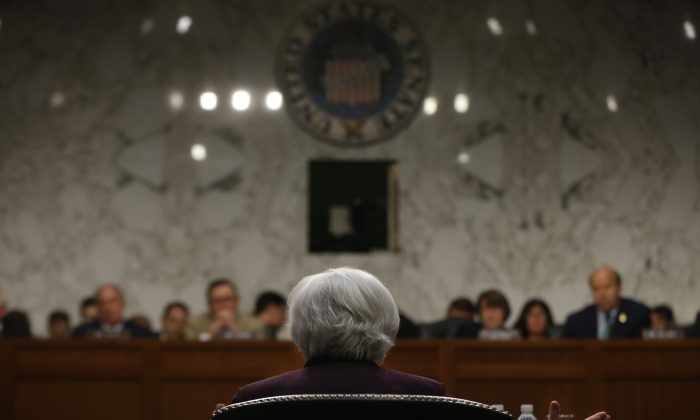 We are living in very unaccustomed times. We are living without the Fed’s quantitative easing, the magic potion which is said to have ended the financial crisis and kept our economy going since. QE, which began in November 2008, ended on Tuesday, Oct. 28.

Even before she became Fed chair, Janet Yellen had this to say about QE when asked if the program to buy large quantities of government bonds and mortgage securities works: “My short answer is ‘Yes.'”

So what about the long answer? Yes, after injecting almost $4 trillion of new money into the system since 2008, the stock market is up, unemployment has come down, and inflation seems under control.

However, underneath the surface and contrary to the Fed’s narrative, the program has created huge costs for the middle class. Even on the very surface, it has mostly benefited wealthy owners of assets and financial speculators.

“I would say 75 percent of the people did not benefit at all. In fact they got hurt because of rising prices in food, energy, and rent,” said Bill Hassiepen, of the independent rating agency Egan Jones. “The average citizen got hurt.”

He makes the point that speculators bid up all kinds of commodities in order to protect themselves against a falling dollar, a side effect of money printing extravaganzas such as QE.

In addition, he said they got their hands on the new money first: “All of that was fuelled by the continuing buying of bonds by the Fed. The Fed put additional liquidity in the market and the only entities banks were lending to were hedge funds.”

Case in point: The consumer price index for meats, poultry, fish, and eggs is up 30 percent since the end of 2009. Dairy products: up 15 percent. Rent: up 11 percent.

Victor Sperandeo, founder and principal of asset management firm EAM Partners identifies another victim of this policy: “It really hurt the person on a fixed income that is retired. If you are retired and living off fixed income you are living from the cash flow of your bond portfolio. Those were the people who were hurt the most.”

The benchmark rate for the 10-year Treasury bond went from an already low 3.73 percent at the end of 2009 to an even lower 2.30 percent in October 2014. This yield is far too little to make up for the price increases of staple products named above. Even if you own stocks, the dividend yield of the S&P 500 index stands at 1.9 percent, far below its average of 4.4 percent.

On the upside, “Certainly it helped keep rates on the long end low and create some cheap mortgages and refinancing. Some average people got some benefits from it,” said Sperandeo.

As another positive, the Fed likes to tell us QE created jobs.

While this is true on the surface and headline unemployment figures went down to pre-crisis levels, average hourly wages in the private sector only rose 9 percent since the beginning of 2010, less than most consumer prices.

But most of the jobs added were not equivalent to jobs lost during the financial crisis, according to Hassiepen.

“The problem is all QE does if you are a business is it adds to your cost structure. Your costs are going up, your cost of energy went through the roof. Your operating costs continue to climb because of the speculation. When your costs are rising, you are looking to bring on part-time or temp work at best.”

He also cites the percentage of people in the labor force, which has steadily fallen during QE and is at its lowest level since the end of the 1970s at only 62.7 percent.

“Are you going to start a business and fight half a dozen agencies and regulations to make a profit? I’d rather pay my money to Google or Johnson & Johnson who already got lawyers and lobbyists. Then I also pay long-term capital gains tax, which is lower than the corporate tax rate.”

“If you were rich and had assets you did well because your assets went through the roof, stocks, bonds, everything,” said Hassepien.

Indeed, household net worth increased by $26.5 trillion since the market bottom in March 2009, according to Fed data. Most of this increase, or $20.1 trillion, is because of rising asset prices.

Equity owners for example enjoyed a 195 percent increase in the S&P 500 since the bottom, far more than the increases in consumer price inflation. According to research by JPMorgan, QE was responsible for adding $9 trillion to equity market valuations, around a third of the current total.

So people who own stocks benefited, but who exactly owns stocks? The Fed stated in its 2013 survey of consumer finances that only 50 percent of all families own stocks. However, almost 90 percent of families in the top decile income bracket own stocks, so the wealth gains are heavily concentrated. The same is true for real estate and other financial assets.

Bill Laggner, co-founder and principal of the hedge fund Bearing Asset Management, identifies another benefactor of the Fed’s largesse.

“What QE really did was it helped the government and the banks transfer a lot of the bad debt from private to government balance sheets,” he said. During the QE programs, the banks could sell their illiquid and at times worthless mortgage securities to the Fed at generous prices where no one else would buy them.

On the other hand, the federal government could run huge deficits for years, as the Fed was soaking up excess bond supply, indirectly monetizing government bonds and lowering federal interest expense via lower yields. “That has allowed the government to stay big,” Laggner said. On the other end of that trade are the millions of retirees on fixed income.

The same is true for large corporations, which also lowered their interest expense and used borrowed money to buy back shares. This further boosted stock prices, but did not do much to increase production or innovation. “They are not spending on capex [capital expenditures] or research. The things you should see in an economic recovery you don’t have any of that. The real economy has been hollowed out,” said Laggner.

According to Sperandeo, the final verdict is still out for QE: “You have to analyze the cost of these benefits when you see a complete cycle. You don’t know what the cost is. Is it horrible or very bad or mild. But there is a cost because the market hasn’t come down yet. To say there is no cost and it helped people is the ultimate form of self-denial.”